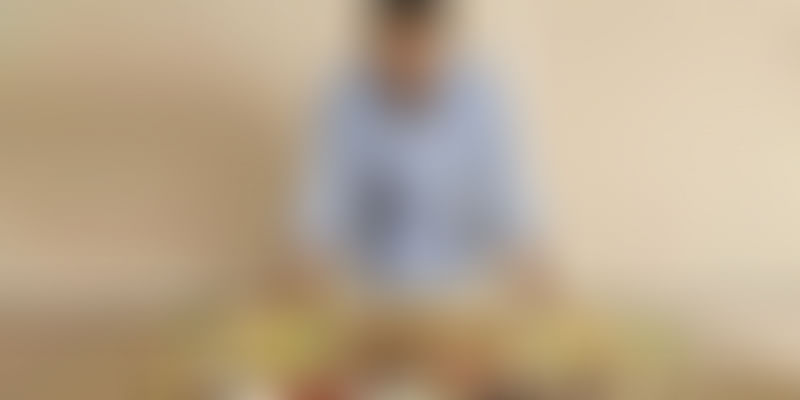 Dindigul Thalappakatti Biriyani, which started with just one outlet in a small town in 1957, has gone places—and how! The Rs 200-crore biriyani brand now has 40 branches across the world and is cooking up other plans of expansion.

Nagasamy Dhanabalan started out as a front-office receptionist in the UK eight years back. Today, he runs a Rs 200-crore business. The 35-year-old insists nothing was planned. Was it destiny, then, that ensured he swap his dream of making it big abroad with making it big in India?

Circumstances forced Nagasamy to return to India in 2009 to tend to his ailing father. Once here, he decided to take over his grandfather’s small biriyani business, now named Dindigul Thalappakatti Biriyani. The Dindigul-based eatery, which first expanded to Chennai with one small restaurant, now has more than 40 outlets across the globe.

It was not a planned process. I was planning to settle down in the UK, but my father was unwell, so I came to see him. While I was here, I wondered why we couldn’t take this village food to Chennai. That was the idea, and slowly we journeyed from Dindigul to Chennai in 2009," says Nagasamy, a third-generation entrepreneur.

The family’s love affair with biriyani began in 1957 when Nagasamy’s grandfather set up a small restaurant, Anandha Vilas, in their home town of Dindigul. Then an accountant, Nagasamy Naidu, believed that his wife’s biriyani recipe was unique and would be his restaurant’s USP. Anandha Vilas, which mainly served goat meat biriyani, soon became popular, serving diners who came from even faraway places, having heard of the aromatic dish by word of mouth.

Just as famous as the biryani was the white-turbaned man behind the counter. Over time, the restaurant went from being called Anandha Vilas to Thalappakatti Biriyani. In Tamil, thalappa means the traditional turban. From 1957 to 2009, Dindigul Thalappakatti had only one outlet in Dindigul itself. The family experimented with a branch in Coimbatore, but it didn’t do as well.

Things changed after Nagasamy took over the business.

When he first suggested expanding the business beyond Dindigul in 2009, the family was resistant. The mention of biriyani evokes images of a pot of aromatic long-grain rice with strands of saffron, pieces of caramelised onion and tender chunks of meat, all cooked to perfection. India has a wide variety of biriyanis. The Lucknawi biriyani is known for its subtle flavours, the Hyderabadi biriyani has its identity rooted in its spices, while the Kolkata biriyani incorporates boiled eggs and potatoes. Most biriyanis originated in royal kitchens.

But Dindigul Thalappakatti offers a different kind of biriyani, one with a typical rural flavour. And so, Nagasamy’s father was skeptical if a rural recipe would appeal to the palate of Chennai’s urban palate.

He was a little scared of (losing) money and scared that I wouldn’t be able to manage,” Nagasamy remembers.

Nagasamy too was unsure of whether he would be able to scale up and run the business successfully, but he decided to go ahead anyway. What he was certain about that the unique flavour would appeal to food lovers everywhere. He convinced his father, who put up the necessary capital to set up their first branch in Anna Nagar, one of Chennai’s prime residential areas.

The customer is king, and customer feedback, says Nagasamy, is the ultimate driver behind business decisions. Keeping his ear to the ground helped him learn the pulse of customers. People who came to Dindigul used to ask me: why can’t you bring this biriyani to Chennai? And that is what I did,” Nagasamy says.

The secret of success

Is wealth creation the sole reason why entrepreneurs start a business, or is there more to entrepreneurship than money? Nagasamy is clear that his vision was big and money alone was never the focus.

When I was a child, I knew my father and grandfather had set aside enough money for me, so it was never an issue. I wanted to make this brand international; that was the dream. I was inspired by restaurants like KFC with a foothold in multiple cities, and I wondered why Thalappakatti couldn’t be international,” Nagasamy says.

To validate his instincts, Nagasamy approached the entrepreneurs behind two other successful Chennai-based chain of restaurants, Saravana Bhavan and Adyar Ananda Bhavan, who also helped him learn about scaling up.

Being inspired is one thing, but having a vision, actioning it, and being able to successfully execute it is a completely different ball game. Most family businesses tend to falter when it comes to scaling up as they find it tough to let go and bring in outside talent.

Nagasamy, however, knew that the only way forward was with a good team around him. He enlisted his paternal uncles, Subburaj Ramaswamy and Ravi, to join the business as it grew.

When you start growing, you should have a good team that you can trust. We believe in education and feel that educated people can make a difference in any organisation. So, I always pick people with knowledge. The people I employ should know more than me,” Nagasamy explains – his idea in sharp contrast to many entrepreneurs who feel that their employees should never know as much, let alone more, than them.

It seems almost unfair to compare the original ‘Thalapakatti’ Nagasamy Naidu with Colonel Sanders, the creator of KFC. But the stories are similar. What started as Anandha Vilas became so strongly associated with the white-turbaned man behind the counter. He was the face of the biriyani he had made famous. It seemed only natural to rename the restaurant to what had brought it so much fame. After Nagasamy’s grandfather’s demise, that’s exactly what they did.

It is said that imitation is the sincerest compliment. The success of the Thalappakatti brand soon spawned competitors with similar-sounding names such as Thalappakaatu and Royal Thalapakattu, which could have, over time, taken away from the brand equity of the original. Nagasamy decided to take the legal route and won the rights to his brand name.

My architect helped me with that. I got a logo with a photograph of my grandfather to project our brand, and that is how we differentiated ourselves from others in the market,” Nagasamy says.

Next up was creating brand differentiation by giving the new restaurants a casual fine-dining look. In Dindigul, the biriyani was served in a small hut-like outlet with the huge deghs used to cook the biriyani placed outside to serve as visual signatures. But this wouldn’t work in an urban setting, so the “look and feel” for the expansion was more in line with what was acceptable to the typical Chennai customer. The consumer that the brand targeted belonged to the middle and upper-class segments, mainly people wanting to enjoy good food with their families.

Before we entered the market, the middle class and upper middle class went to normal restaurants without air-conditioning. They could not take their families there, so we opened Thalappakatti for families with children,” Nagasamy says.

Differentiating the brand and product helped Dindigul Thalappakatti Biriyani flourish, but timing was an equally crucial factor. What worked for the brand, especially in a market like Chennai, was the fact that biriyani had by then become extremely popular.

Earlier, it (biriyani) was a special thing, for festivals and special occasions, but people soon started eating biriyani on a regular basis. It can be lunch, dinner or in between, and we optimised that. Our unusual flavour helped distinguish us from our competitors. That led to a spurt in growth,” says the accidental entrepreneur.

Dindigul Thalappakatti Biriyani’s core offering has always been mutton biriyani, but to accommodate the demands of its growing clientele, the brand expanded its offerings to include chicken and minced meat biriyani. Varieties like Chicken 65 Biriyani, Paneer Biriyani and Mushroom Biriyani, among other options, are also available. The menu also has barbecues and other South Indian delicacies like Mutton Sukka and Karandi Omelette.

Dindigul Thalappakatti Biriyani went from two to 40 branches in eight years. They currently operate in Paris, Dubai, Kuala Lumpur and California, and are eyeing the market in Sydney, Abu Dhabi and Muscat. In India, the plan is to expand to tier-2 and tier-3 cities in Tamil Nadu and then spread to other cities.

The restaurant chain also has a foothold in the delivery model, with a focus on delivery through their website, thalappakatti.com. Home deliveries help rake in Rs 1.5-2 crore per month in Chennai alone.

The company, which operates via centralised kitchens in Chennai and Dindigul, wants to open in 10 cities over the course of the next year.

If you haven’t yet tasted the finger-licking flavours of Dindigul Thalappakatti Biriyani, fret not—if all goes according to plan, it may soon open at a location near you as part of their plan to expand to cities like Bangalore, Mumbai and Delhi in the near future. I, for one, can barely wait.