With 11,000 people with disability trained, Youth4Jobs is changing weakness into strength 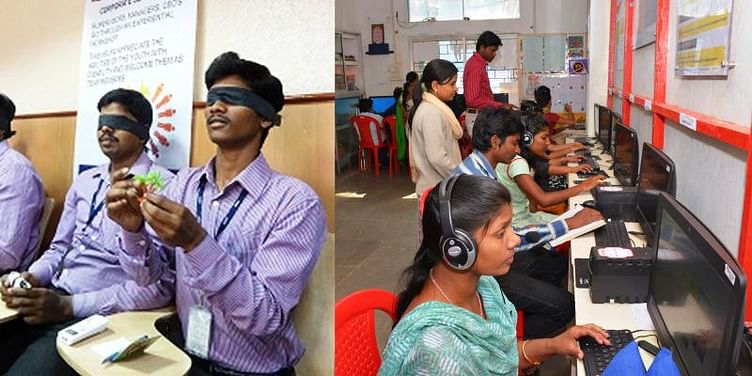 'Empowerment through disability' is the core philosophy of Youth4Jobs. A strong believer in ability of the disability, the organisation explores the complete potential of disabled individuals, turning what they call 'shortcomings' into strength.

Assumptions and ignorance only contribute to limitations. One glance at people with disabilities (PwD) and pity takes over all other emotions. We equate their state to powerlessness or, at times, show no concern altogether.

This constant association to dependency or presuming that life as someone with a disability is nothing but wretched is what guises a disabled person's true competence.

Everybody deserves an opportunity to succeed, but less than a fifth of the disabled population in India have jobs. Only 1 lakh of the seven crore people with disability have employment according to Disability Information Resources.

Youth4Jobs, with the vision to create a better future for young India, including the youth with disabilities, assists and trains people living with developmental and intellectual restrictions. In addition, they carry out in-depth work with the organisational sector to help open up a bucket of options for this population.

Meera Shenoy (57), Founder of Youth4Jobs, lives an impactful life, with most of it spent for a cause. Having worked for the business media starting with print and then television, most of her stories took her to the villages. “I reached a point in my life where I was not satisfied with capturing these stories on paper or camera. I wanted to do something hands on,” she says.

An unexpected offer to set up India's first skilling mission for the rural development department of the Andhra Pradesh government yielded this opportunity. As part of this project, called Employment Generation and Marketing Mission, Meera worked with skill training youth in villages. “Being a pioneer is fun as there are no cut-and-paste solutions possible. Using my corporate background, combined with the large network of the government, I set up pro-poor academies in the districts that linked rural unemployed youth to jobs.”

After six years of leading EGMM, Meera consulted with the World Bank as the only specialist in youth and skilling in their poverty alleviation projects. Here, she built the capacities of the World Bank-funded Jeevika project team for their youth component, developed the strategy and helped set up a migration resource centre.

This led her to the next stage of her life: setting up Youth4Jobs in 2012. “The same core team of three who supported me in the government work came on board for Youth4Jobs. I was clear on not wanting to repeat our previous work. Finally, we zeroed in on skilling youth with disabilities for jobs,” says Meera.

With this, she brought out a new mantra that the organisation lives by: ‘Hire these youth as it helps your business. Not out of sympathy or pity.’

The reasons to have chosen this spectrum are many says Meera. “With 80 percent of the world's disability population coming from developing countries like India, any positive impact affects not just our country but the world.”

A decision on working with the disabled youth comprising of at least 30 percent women from unreached villages, Youth4Jobs has set up job-linked skill development centres customised for different kinds of disabilities. A training that lasts for two months with food and accommodation provided, it includes a specially designed curriculum with modules on English, computers, life, soft skills and industry-specific skills, followed by on-the-job trainings. With fun filled and interactive content, the youth are trained for sectors depending on their education and aspirations.

Engaged in creating an inclusive workforce

Linking a non-disabled person to a job is very different to that of disabled person as most Indian companies do not understand disability. Whilst Youth4Jobs began working and scaling they realised that companies needed to be sensitised towards PwD. With this they launched a company connect programme to support companies in their inclusion journey.

“Most companies were in disbelief that these individuals could carry out normal jobs. They were reluctant to hire youth with disabilities and had negative notions regarding the youth. We persisted to understand the gaps by designing solutions like fun-filled interactive workshops for all managerial levels,” says Meera.

A range of services from sensitisation workshops, developing job role matrix and adapting to workplaces as part of the placement training acts a one-stop shop for companies for inclusion, says Meera. “We felt we could position these youth as an alternative talent pool that would add value to their business.”

When roadblocks only led to making a bigger impact

Trials were mammoth, but Youth4Jobs has proved to be a model that demonstrates linking one youth in a family to a job can take the entire family out of poverty in a sustained manner while creating a 15-percent productivity increase for the company when hired.

From locating youth with disabilities in remote villages to overcoming scepticism of the families these individuals come from, Youth4Jobs in five years of existence has trained over 11,000 youth with disability across India placing them in jobs of various sectors such as Retail, Manufacturing, Quick Service Restaurants, Beauty and Wellness, Hospitality, BPOs and IT/ITeS, to name a few.

A small team that has now expanded to over 80 members, includes 10 percent of the disabled. “We are all bound by the same spirit of making a difference and with our staff having PwD, we walk the talk as well,” says Meera.

Today, Youth4Jobs has 22 training centres in 12 states across the country with two coaching centres for the visually impaired. They have reached out to nearly 2,00,000 community members and over 500 corporates of which 200 are first-time hirers.

Continually innovating, Y4J has introduced concepts such as the ‘silent cashier’ in retail stores with surveys showing customers preferring this to a speaking cashier. Likewise, diversity workshops conducted at Google has led to 35 youth being employed, leading to a host of automobile companies working with them.

This year, Y4J is working with a government school for visually-impaired girls, and speech and hearing-impaired school to create a holistic model for scale.

An organisation you can contribute towards

Youth4Jobs started out on a shoestring budget. Their first funding for an upscale came in from the Axis Bank foundation. Ever since, they are supported by sensitive donors who believe in the mission of the organisation.

They now look to empower 100 disabled individuals at their Tirupati centre through crowdfunding. This initiative can help put an end to the underestimation this equally proficient group faces on an everyday basis and lead lives on par with the rest.