'Future of work can be found only in the co-working spaces,' says Karan Virwani of WeWork 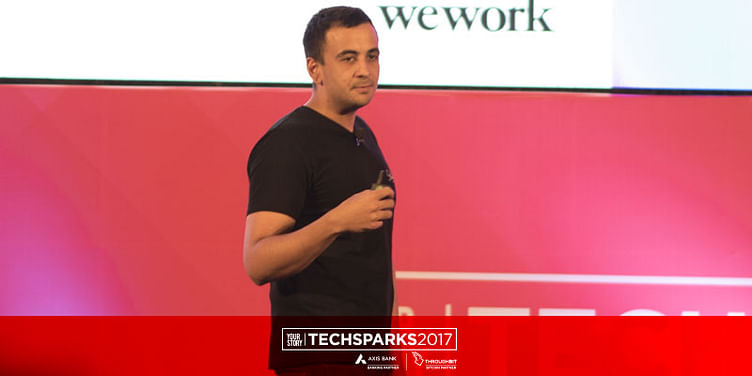 At a time when there is the talk of Artificial Intelligence (AI) and Machine Learning (ML) taking over human jobs, it is interesting to know what the future of the workspace looks like.

In its report on ‘Future of Work’, PWC states that 37 percent of people are worried about automation putting jobs at risk -- up from 33 percent in 2014. However, 73 percent think tech can never replace the human mind.

At the inaugural day of the eighth TechSparks on September 22, Director WeWork India Karan Virwani said in his talk on ‘Future of the Workspace’ that it is this factor that they are banking on for the success of co-working spaces in the world.

“Contrary to what people think that with the advent of robots and AI human interactions will become rare, we believe that the future of the workspace is bright,” he said.

Stating that 50 percent of the workforce is going to be millennials and 70 percent of them will be living in big cities, Karan points out that it bodes well for a company like theirs. “The millennials are the sharing generation. They have changed the way people today eat, sleep, work, and play,” said Karan, adding, “Used to sharing their lives on social media, this generation has grown up with the notion that sharing is normal and that is how it should be.”

Today, startups have disrupted hospitality, finance, transportation, eating out, and more in a big way. “Owning a car or a house is no more important. In a similar way, traditional workplaces also seem on the way out,” said Karan.

Describing the co-working concept, he said spaces like theirs encourage collaborations and interactions. “There’s more inspiration and what’s more it is laced with technology. It is a space where you would love to come to work every Monday.”

According to the PWC report, “This is a world where workers and companies seek out greater meaning and relevance in what they do. Social-first and community businesses find the greatest success and prosper. It’s a world where humanness is highly valued.”

It is expected that investments of $400 million per year for the next five years will be poured in the co-working space.

The Bengaluru co-working office of WeWork was set up as part of an agreement between WeWork and the Embassy Group in November last year. Karan is the scion of the Embassy Group, the Bengaluru-based commercial real estate developer. With $25 million invested in the WeWork India JV, Karan is thinking of expansion as a way to stay ahead of the competition.