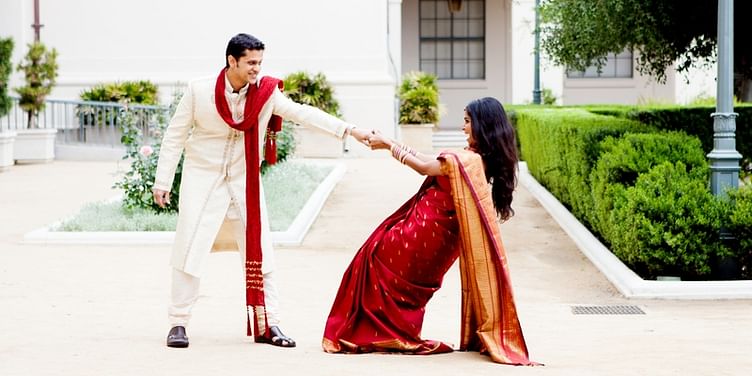 While several are still entering matrimony with all the shenanigans, there is a growing number that are opting for frugal weddings, and celebrating the occasion by giving back to the society.

Think the big fat Indian wedding, and images of lavish decorations, heavily jewelled brides and relatives, mountains of gifts, sumptuous meals and many, many sweets come to mind.

While several are still entering matrimony with all the shenanigans, there is a growing number that are opting for frugal weddings, and celebrating the occasion by giving back to the society.

Police sub-inspectors Manoj Patil and Sarita Laykar decided to get married in a low-key ceremony on April 28, 2017, at Narsobachi Wadi, a pilgrim site in Maharashtra’s Kolhapur district. The money saved was donated to charity.

Growing up, Manoj witnessed may extravagant weddings, and was disheartened to see the dowry system and the huge expenditures incurred, mostly by the bride’s family. He said,

I have three older sisters and I have seen how much effort my parents put in for their weddings. I was clear that my wedding would neither be lavish nor involve dowry. My father, a retired serviceman, supported me.

Manoj and Sarita each contributed Rs 1 lakh, and donated it to various charities— Rs 50,000 to a school in Dewle village and Naam Foundation, an organisation that helps farmers. Further, Rs 50,000 was given to various other causes, including a public library.

Kerala-based art connoisseur Soorya Krishnamoorthy decided to keep things simple at his daughter’s wedding. The couple, Sita and Chanda Kumar, both trainees at the Civil Services Academy, got married in a low-key ceremony held in the puja room of Soorya’s residence in Thiruvananthapuram.

It was my long-term wish to conduct Sita’s wedding in a simple way, without any auditorium, celebrations, or luxury. I was confident when my wife Raji supported me, Soorya says.

Soorya donated Rs 15 lakh - the money he had saved for Sita’s wedding - to various institutions where he studied— Model School, Government Arts College, and TKM Engineering College, Kerala—sponsoring 20 students for a four-year education.

Abhay Deware, an IRS officer, and Preeti Kumbhare, an Assistant Manager with IDBI Bank, decided they would go for a simple registered wedding and donate the money saved to families of 10 farmers who committed suicide. Forgoing wedding rituals, the couple gave Rs 20,000 to each of the ten families.

Abhay says over Rs 1 lakh crore is spent only on weddings in India every year.

It’s a staggering amount in a poor country like ours where even the annual budget is around Rs 16 lakh crore.

Influenced by his meeting with former President Pranab Mukherjee, he decided to become an agent of socio-economic change. The couple also donated books on competitive examinations worth Rs 52,000 to five libraries in Amravati, including their native village Umbarda Bazaar in Karanja Lad.

Soumya Garg and Sahil Aggarwal decided to donate a sum of Rs 10 lakh they received as wedding gift to support various causes by setting up Sagan Initiatives in Delhi.

They received 48 ideas through online applications, from which they handpicked six based on whether these further a social cause, promote a local economy or culture. Each idea has been given between Rs 50,000 and Rs 2 lakh in the form of grants, equity, or pay-it-forward loans.

Sagan Initiatives has benefitted NavGurukul, an effort to provide rigorous, residential training to the less privileged; Teach for Green, an organisation focused on environment and sustainable awareness; and Yazili Najhanmabhoomi, a farmer-produce organisation providing affordable seeds and fertilizers to farmers among others.

Vivek Vadke, a chemical engineer, opted for a simple wedding after seeing the plight of farmers in Maharashtra due to droughts. He says,

We were quite aware of the situation in the state and did not want to spend money on things that are not too important, like decorations.

The family saved Rs 6 lakh, and donated the amount to two villages, enabling them to desilt and widen canals.

These may be just five families, but together they have touched the lives of numerous families, making a difference, big or small.