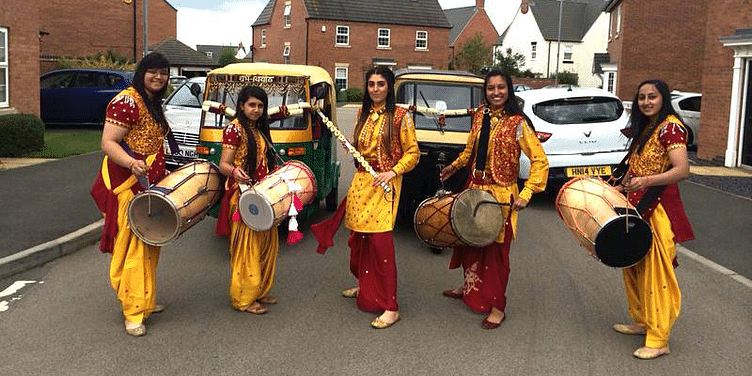 With a dhol in her hands and her feet stamping to the beat, Parv Kaur is spreading Punjabi culture across the globe.

Say ‘Bhangra’ and one is immediately transported to a world of colourful dresses and loud music, where men play the dhols (drums) hanging from their necks and women dance to those tunes. Today, one can associate this rich traditional art form with Bollywood films, musical performances, weddings, and festivals.

The Bhangra music industry worldwide is primarily male-dominated. Earlier, women were hesitant to be associated with the outdoor or professional music industry — society looked down upon women who were associated with the commercial performing arts. Singing and playing musical instruments remained confined to the male domain despite the options of having female instructors.

Parv Kaur, a second-generation Indian residing in the United Kingdom, is using this same instrument to beat these stereotypes. With a dhol in her hands and her feet stamping to the beat, she is spreading Punjabi culture globally. Parv and her band, ‘Eternal Taal’, are well-known names across the country and she has taken up teaching music and dance, to inspire younger talents.

She says, "I’ve always been one to ensure I stand out from the crowd, so I picked up the loudest instrument — the dhol. It’s loud, energetic, and big; I wanted to get the same attention men were receiving. Essentially, I wanted people to recognise that women can do it too."

Nominated for the ‘Young Entrepreneur of the Year’ by the Institute of Asian Businesses (IAB) and ‘Best in Arts and Culture’ by the Asian Women of Achievements and the British Indian Awards, Parv is redefining Bhangra.

Thirty-four-year-old Parv, a resident of Birmingham, was born into a family of musicians. After her family moved to the United Kingdom in 1964, music became instrumental in keeping their memories of the homeland alive.

Her father, Balbir Singh, has been credited by the Guinness Book of Records for being the ‘pioneer in bhangra music’ and introducing bhangra to the UK through his band, Bhujangy Group, in 1967. The band, comprising her extended family — uncle and cousins — chronicled their daily life and struggles of moving to a new country. This instantly clicked with the Asian community and they became a regular fixture at events.

Where are the ladies?

“I picked up most Punjabi folk instruments that my father’s band was using on a regular basis, but I noticed there were no women to be seen anywhere in this industry. There were also no women at the gigs we were attending; it was part of the culture for women to not attend party-like events at weddings. So I started to wonder, ‘Where are the ladies’? This is when I fell in love with the dhol and that motivated me to start music classes,” Parv explains.

With a zest to make a place for her gender in a male-dominated industry, Parv started to chart her journey and “learn the tricks of the trade” early on as the Bhujhangy Group performed on stage. She gave her first performance at the age of 12 when she performed with her father’s band at a ‘Yamla Jatt ceremony’.

I had music around me all the time so it was inevitable that I would go down that path like my father before me.

By 1999, the young 16-year-old was ready for her adventures and Parv formed Eternal Taal with three members.

Initially, the immediate reaction was that of shock, Parv recalls.

"Being the only female dhol player, performing weekly did bring some negativity, especially at the beginning of my journey and this did knock my confidence on many occasions. However, I always looked back at my father. He had gone through his own struggles and if he could overcome them and become successful, then why not me too?"

Given the heavy weight of a drum, a minimum of 6 kg, playing the instrument required her band to maintain robust fitness levels.

The industry criticised Parv and her band; before the performances, audiences were apprehensive about girls carrying dhols. Yet, once the lights came on, the girls would stun everyone with their loud and energetic performances.

There is so much stigma attached to girls and women showing their music passion up on stage or publicly. I loved playing the dhol from a very young age; however I was always afraid of what people thought of me and whether my family would support it.

"When searching the internet for dhol groups I came across Eternal Taal. I saw Parv playing the dhol and was amazed by her stamina, confidence, and overall passion for what she does," she adds.

Parv was not new to challenging the norm associated with her gender. Having trained in martial arts for over a decade, she was given the tag of ‘tomboy’ during her school days. As a shortage of funds was limiting Eternal Taal to Birmingham, Parv worked part-time while pursuing her CGSE in music. With enough savings, she got her mother to sew band uniforms so that they could look like a team.

Her entrepreneurial zest started taking shape and initially, Eternal Taal played at charity events and went door to door distributing flyers about their classes. She grew in popularity with the younger generation once they started performing at local festivals and soon, at weddings and events. Many youngsters expressed their interest in learning this art form; however, females engaging in bhangra music continued to be looked down upon.

Yet, her team refused to bow down to societal expectations. Eternal Taal grew and attracted both men and women who wanted to learn the Punjabi music and dance. By 2009, they started an all-female Bhangra dance team.

When others want to learn the dhol from me and look up to me professionally and personally, I feel a great sense of fulfilment; knowing I have somewhat shown and opened the door to females in the UK wanting to learn the musical instrument.

One of the biggest achievements for Eternal Taal came through the recognition they gained from within the Bollywood industry. Parv and her team have performed in three mainstream Bollywood movies — Yamla Pagla Deewana 2 (2012), Shaandaar (2015), and Ae Dil Hai Mushkil (2016).

This recognition really boosts the team’s confidence and we have felt really proud having the opportunity to promote Bhangra music on such a huge platform three times. Growing up watching Bollywood films and then being on the sets of them was a surreal experience, Parv says.

Over the past 18 years, her team has performed on BBC, Channel Four, House of Commons, Glastonbury Festival, and Parv has even played her dhol at 15,000 ft for a charity skydive for Khalsa Aid.

A taal for eternity

Upon her father’s insistence, she continued college and pursued her master’s while continuing part-time work to keeping funding her passion.

Music really makes me feel on top of the world. I’m in my own little bubble which helps me build confidence, meet new people, and see the progression of my students. Ten years down the line I still want to able to say we are promoting Bhangra music worldwide, showcasing our talent and inspiring others to take up a musical instrument.

Today, Parv is a qualified lecturer in computer science and she teaches Bhangra dance and drums in the evenings on a weekly basis, while continuing to build her band and perform on various platforms.

“Our aim is to present Bhangra music to wider audiences. Eternal Taal will bring our beats to every stage.”