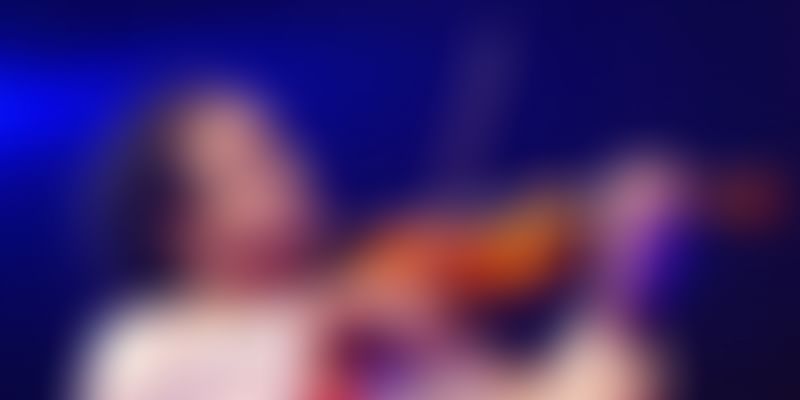 Acclaimed violinist and composer L Subramaniam talks to YourStory on how he began exploring music, why he decided to stick with the violin, and his foray into the world of fusion.

It was the year 1958, and the agitation at Jaffna, Sri Lanka, was at its peak. Two young boys were on their way home from school when many goons began chasing one of the boys. Unknown to the youngsters, this was the modus operandi used to murder people of ethnic races. But the boy managed to give them the slip.

Escaping overnight, the family of Professor V Lakshminarayan Iyer and Seethalakshmi moved out of Sri Lanka and came to Chennai.

From here began the journey of one of the boys to becoming a renowned violinist - L Subramaniam.

“I remember the night clearly. We left with what little belongings we had and our violins. Our neighbour had warned us of the trouble, but my mother and father didn't believe her. But that day when my brother was chased, everything changed,” L Subramaniam says.

Sitting at his plush home at Dollar’s Colony, Bengaluru, Subramaniam talks about how he tried different instruments and finally settled down with the violin.

“My mother would play the Veena, but was a singer, and it was my father’s dream to bring the violin to the fore and make it a solo instrument. Till then, the violin was primarily used as an accompaniment. If you played really well, you were dropped, because they did not want the instrument to overshadow the vocals.”

After coming to Chennai, Subramaniam finished his schooling and joined Madras Christian College. Since his brother was already playing the violin, Subramaniam’s father was keen that Subramaniam learnt a different instrument or tried vocals.

“I tried the harmonium and other instruments. But when my father saw that I wasn't interested he made me try the violin. I wanted to play like him and be like him, because he was my guru, teacher and father,” Subramaniam says.

He went on to join the Madras Medical College, and got his MBBS degree. When Subramaniam was in his second year, his father took him to a concert where a man from Germany was performing.

The next day, the man offered to take Subramaniam to Germany and coach him in western music. However, Subramaniam couldn’t go because his mother insisted that he finish his medicine course.

“I started arguing and tried crying, but nothing worked. Her decision was very wise and I appreciate her decision. She told me to finish my medicine and then go wherever after that. Become a doctor; then if you don’t want to practise, don’t, she said,” Subramaniam says.

While Subramaniam did try the Madras University for a diploma in music, he realised he had to go to Annamalai University for a four-year diploma. He went abroad and joined the California Institute of Arts.

“Most of the people there were local white Americans. I was the only brown guy. I used to work really hard as a teaching assistant. I asked for a piano and a room, which they gave me to teach. I used to work and practise there. I would wake up and rush to class and I would sit at the end, because nobody used to talk to me. I did not have any friends, Subramaniam recalls.

While working on one assignment, a professor recognised Subramaniam and praised him. After that everyone started talking to him

“It was amazing how things changed. I would sit in the library and read references. I worked very hard and slowly started composing,” Subramaniam says. When he finished his coursework in nine months, his professors gave glowing reviews, but the dean said the institute could not give nine give me an MA degree in nine months. I needed to finish the time of the course,” So, Subramaniam worked as a teacher for a year.

“I had to play a live concert after a year. I spoke to my parents and they said it would be really difficult for me to buy another ticket and come back. If I did so, it would have to be on my expense. So, they told me to finish everything and come back,” he says.

Also read: From being restaurant diva to playback singer, Shalmali Kholgade on seizing every opportunity

It was while Subramaniam was playing Indian classical music that renowned Jazz artist and producer Richard Bock asked him to work on fusion music.

“I said that if I did fusion music, I could go back next year, because people back home would think that my attentions were completely diverted. He said I should do an album, and that he would not release it in India. He gave the India rights to me,” Subramaniam says.

It was during this time that George Harrison of The Beatles was into Eastern philosophy and produced a show for Ravi Shankar. It was at a concert that George organised that Subramaniam performed with the likes of Sultan Khan and Ravi Shankar.

“We had concerts in places such as Royal Albert Hall, where I was asked to play a Carnatic Solo, Raviji would play a North Indian solo, and then we would have a composition where we would play together. That tour was happening and Raviji told my father to send me for the tour. The first North-South jugalbandi started in the US with us,” Subramaniam says.

The duo played a public concert and recorded a few compositions. At this time, two things happened. First, they had started the North-South fusion and while Subramaniam did jugalbandis with people like Bismillah Khan later, the beginning was in the US in the late 70s. and they recorded these in 1980-81.

The concept of global fusion came about because of the album and that was a big thing.

Richard immediately said that since this was such a big success and Subramaniam should not stop it and should give him five more albums.

“He continued to assure me that this would not reach India unless I wanted it to. So, I started doing Global Fusion concerts around this time. I started working with Norwegian and Scandinavian violinists. I started doing different projects with different people such as Yehudi Menuhin and Stephane Grappelli. I did four albums and gave them to him. All of a sudden what happened was a lot of legends wanted to start collaborating with me and continue the concept of Global Fusion,” Subramaniam says.

Also read: On Song: Kavita Krishnamurthy on jingles, playback and rediscovering her love for music

A lot of Jazz musicians were trying to introduce rock elements to their music. So Subramaniam created a Global Fusion Concert involving Japanese, Indonesian and African artists; the orchestral piece they created was called Global Symphony.

“I wanted to ensure that multi-layered musical collaborations could take place instead of a mere East-West collaboration,” says Subramaniam. The first orchestra piece Subramaniam wrote, he played by sharing the stage with a renowned group The Crusaders.

Joe Sample wrote a composition and Subramaniam wrote for the Violin. In those days, everything had to be hand-written, note by note. After rehearsals, they decided that the piece Subramaniam wrote would be the closing piece.

“We got a tremendous response for that piece and that led to me being asked to write a piece for the New York Philharmonic. My music went a completely different direction thanks to Richard Bock, and the reception I got was fantastic,” Subramaniam says.

There was no looking back. He soon got the likes of Stephane Grappelli for Jazz Yatra and Larry Coryell. soon

Subramaniam now plays the Global Tour, which started in South Africa and has - as of now - played in all five continents.

“I have played in Bangladesh, where 35,000 people were listening to Carnatic Music at 3:30 in the morning. We did not even think all this would happen,” says Subramaniam. It was during this this time that his wife, friend and collaborator, Viji, passed away and in 1995 that Subramaniam moved back to India. He stayed in Mysore and started his father’s festival, on January 2.

“We do it in 4-5 cities in India, in Germany, US, and other European countries. The music festival also became a big thing, much bigger than we expected. We only wanted to do it in Chennai in his memory. But we do it in Bangalore also every year now. Fortunately, some of the greatest artists from all over the world decided that they wanted to be a part of this and started coming here. People like Stephane Grappelli came. I also started getting offered films and I did a few films. All these things were not planned at all,” Subramaniam says.

Today, Subramaniam works with Kavita Krishnamurthy, the duo got married in the late 90s.

“We believe that music is something that enhances the creativity of a person. Logically, we are trained to elaborate a seven-note raga and make it last 45 minutes to an hour. It is like taking seven alphabets letters and writing big essays. That is what music is. If you are able to make people sit and listen for that long, you have to be tremendously focused and creative. This enhances focus, creativity and insight within us, which can be applied to any profession. Whatever profession we are in, we can focus more and create new methods of doing things. We want everybody to learn that. Music can change your personality, increase your creativity, and when you start listening to music from other cultures, you begin to become sympathetic towards them.”