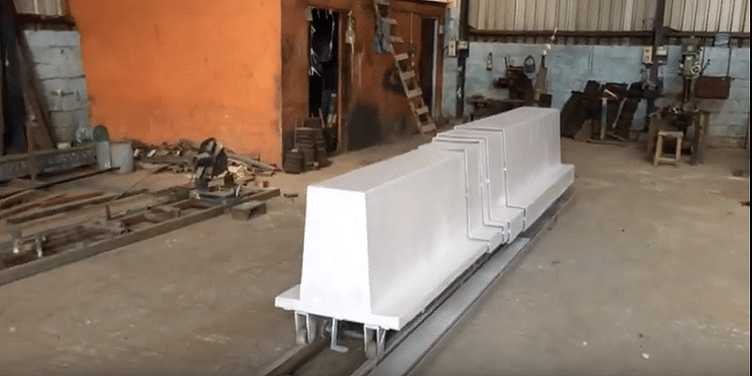 Built by a Bengaluru innovator, this technology not only helps in decongesting traffic but also makes way for emergency vehicles on priority.

Ashwin Natarajan was stuck in one of Bengaluru’s notorious traffic jams at a busy intersection in 2014 when he wished for the road divider next to him to move and ease congestion.

That’s when I envisioned a smart road divider which can function like a programmable unit. And that’s how the idea of SMIDER was born, says Ashwin.

Thirty-five-year-old Ashwin has invented the world’s first automated smart divider (SMIDER) to alleviate the Silicon City’s much-talked about traffic issues. Engineered to function both in automatic and manual modes, this SMIDER can open up to re-route traffic on to less crowded/alternate roads.

Having come up with an initial model, Ashwin first presented his SMIDER concept idea to CK Baba, the then Deputy Commissioner of Police of Bengaluru - Traffic East Division.

“He just saw the video and asked, ‘when can we do this’? The kind of enthusiasm and support he showed provided me further impetus to improvise on the invention,” says Ashwin, who is also an industrial engineer by training.

According to Ashwin, once implemented, SMIDER can be helpful in solving many traffic related problems.

One, by re-routing traffic at crammed junctions, it can help ease congestion with less time invested in traffic management. Two, by reducing the idling of vehicles it can also cut down on the emissions leading to slightly better air quality at intersections. And lastly, it can also minimise the effort of traffic cops who often put their lives at risk to redirect and manage traffic.

Having spent all his personal savings on building a prototype, Ashwin and his schoolmate Sachin Kamaladharan (also the co-founder of the SMIDER project) have now started a crowdsourcing campaign to raise funds to ensure that their innovation makes it to the implementation level.

“We tried to approach many organisations, accelerators to help us in this effort. Since, we did not receive the kind of support we were looking for, we have opted the crowdsourcing method,” says Ashwin, whose online fundraiser has now raised one-fourth of the money required for the actual deployment of the device in Bengaluru’s jam-packed Kaveri Junction.

Apart from traffic decongestion, SMIDER can help in providing emergency vehicular access and crime prevention. The panel board attached to the SMIDER allows traffic policemen to either operate it in an automated method through available presets in an easy manner or in manual mode where they can move/open the SMIDER to allow an ambulance, stop escaping offenders, etc.

Calling it an innovation “apt for smart cities,” Sachin says, “Over the years our governments have invested heavily in infrastructure related initiatives. However, this has been done in disparate ways.”

Sachin quotes the example of Bengaluru’s Richmond Circle flyover which has been modified multiple times over the years. “Such measures cause both vehicular congestion and public inconvenience.”

At least 5-10 percent of traffic congestions can be avoided if people stopped moving in different directions erratically at junctions. In this context, devices like SMIDER will allow people to use various infrastructure facilities in more viable and effective manner, he adds.

Reiterating the game-changing role SMIDER can play, Ashwin says, “In Bengaluru, there is a huge gap between planning and implementation. In most of the important junction points, vehicular traffic exceeds the capacity of the carriageway. Since SMIDER allows for effective utilisation of all roads, it saves both time and money by alleviating traffic in choked junctions like Silk Board”.

Completed in October 2016, SMIDER is now awaiting completion of a few necessary final trials where its various mechanical and electrical components are validated before it gains the proof of concept (POC) and proceeds to deployment stage.

For Ashwin, who believes in ‘Make for India,’ rather than Make in India,

The larger goal is to also ensure that SMIDER is effectively deployed in all smart cities across India and in various technology parks where traffic woes escalate during peak hours.

The Chinese lane shifters and the American road zippers which help shift/increase existing lanes during rush hours might be parallel inventions along the same concept.