These youth-led startups are transforming India, one innovation at a time 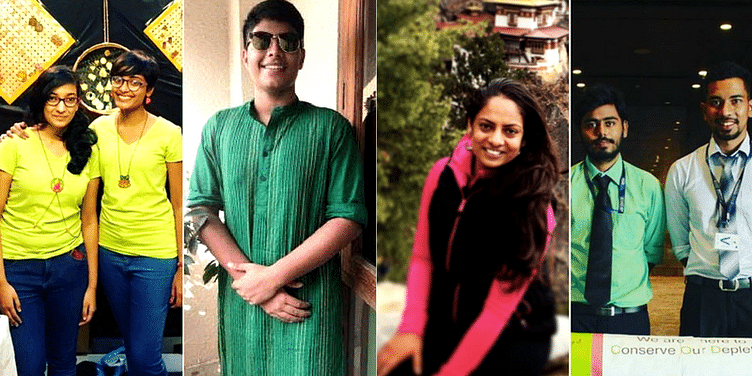 Start small, start somewhere - potential of the youth is immense, and changing the country, one small step at a time.

India is home to the world’s largest youth population, with over 356 million in the age bracket of 10 years to 24 years. As we observe the 33rd edition of National Youth Day, it is imperative to understand the aspirations, dreams and challenges of today’s youth.

Swami Vivekananda, whose birth anniversary is observed as youth day, had said,

“The only condition of national life, of awakened and vigorous national life, is the conquest of the world by Indian thought. This is the time to decide your future — while you possess the energy of youth.”

What does the youth want, is the biggest question of all time. We interacted with a few young entrepreneurs to understand this.

Started in 2016 by friends Naman Gupta and Vishal Kanet, Noida-based Code Enterprises today operates in 20 states. It is the country’s first company that focuses on discarded cigarette butts and recycles them to create attractive byproducts.

With some research and experiments, 23-year-old Naman and 26-year-old Vishal came up with most feasible chemical process to clean and recycle cellulose acetate, the polymer used in cigarette butts, as well as the residual tobacco and paper.

While organic compost came from the tobacco and paper, the polymer can be used to make cushions, stuffed toys, accessories, and key chains, among other things.

“We were familiar with the Delhi-NCR region, and hence started operations there. We visited cigarette vendors explaining what we were trying to do,” Naman explains.

Things were easier said than done.

“Many of our bins to collect cigarette butts were stolen, while several others were never used. We, however, continued working with cigarette vendors and would them every fortnight, weigh their bins and pay them accordingly,” he adds.

The duo used social media extensively to promote their enterprise. Currently, Code Enterprise has 60 associates, spread across 100 districts who collect and send the cigarette waste to Delhi, where it is recycled.

Vandana Vijay, following a three-year stint with Facebook, chose to leave her job and at 30, started Offbeat Tracks. Her company focuses on experiential, and sustainable travel across India. Set up in April 2016, it works with various rural communities, integrating with the local population.

“For a growing number of people, the idea of travel has changed from ticking off places on your bucket list, to gaining and gathering new experiences.”

The startup attempts to create aesthetic, unconventional and authentic tours.

“Last year, Ladakh was cut off from internet connectivity for over three months due to heavy snowfall. Working out logistics and supply with our vendors was quite a challenge during that time frame,” she says, recalling the challenges she faced that were often beyond anyone’s control.

Fashion graduates Vandyaa and Rekha shared a love for all things vintage, and handmade. Together, they set up Ishma, with a mission to revive dying crafts, and improve employment opportunities for artisans.

“We wanted to work with handicrafts because their workmanship, creativity and power to take us through history and social change has captivated us. Though both of us graduated in 2014, we registered ourselves as an LLP in 2016,” Vandyaa says, adding that the two had decided on idea when they were in the final year at National Institute of Fashion Technology, Hyderabad.

The two visited villages in Telangana and Andhra Pradesh, lived with artisans to understand their lifestyle, and monetary requirements, and why they were discouraging their children to take up their craft.

"Jewellery is a fast fashion product, it will always be in great demand - as long as we humans love to adorn ourselves. Therefore, we thought that to start with and to ensure continuous purchase orders to the artisans, jewellery would be a great idea,” says Rekha.

Like many teenagers age, Ayan Bhattacharya was fascinated by foreign brands. Reading about artisan weavers and their meagre income, he sought to do something for them.

The 17-year-old decided to take action and started Artysan, which markets artisanal clothing. Ayan connects with schools, offices, and companies to promote handloom.

“My journey till date has been really enlightening. I’ve invested a lot into this venture — starting from setting up the website, speaking to the weavers, speaking to customers, and marketing the products on social media — everything was new and difficult.”

Artysan is bootstrapped, and works with five weavers. It sells scarves at affordable prices and the income of the weavers has doubled.

Many entrepreneurial journeys remind us that age is but a number - what is needed is the zest and passion to pursue new ideas. Start small, but start up – that’s what the youth believes and lives by.