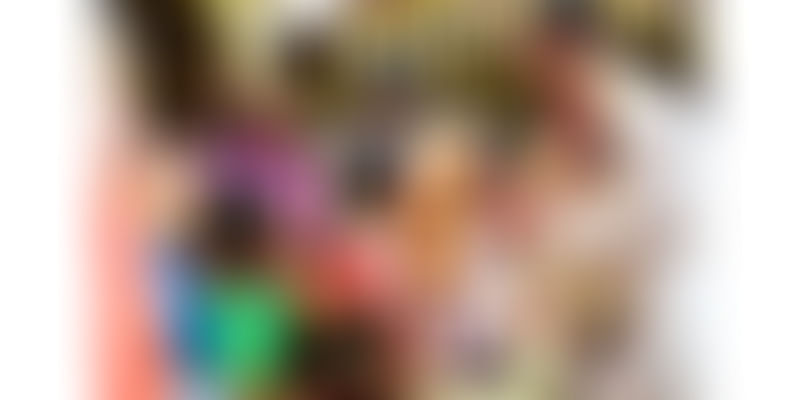 If you've ever had a wedding in the family or had the chance to be closely involved with the planning of a wedding ceremony, the inherently patriarchal nature of the institution and the wedding ceremony to mark it, become increasingly apparent.

While Indian families expect a woman to uproot her life and get absorbed into the husband's family, adopt his last name etc, even the rituals during the ceremony tend to treat a woman as property - the kanyadaanam or "giving away" of a daughter is a prime example of it.

While the very ritual in itself is sexist - one small aspect of it was changed by a single mother as a powerful symbol. The daughter is "given away" by a father to the groom, both supposed patriarchs of her "old" and "new" families, and in the absence of a father, any other male figure steps in - like an uncle. But for Rajeshwari, a single mum who had invested her life into the upbringing of her children, this seemed absurd. Thus, she decided to defy this centuries-old norm and do the kanyadaanam of her beloved, herself.

This was brought to the internet’s notice by Chennai photographer Varun Suresh, who uploaded the album on to his photography blog on the occasion of the couple's first wedding anniversary. Here is the heartwarming story of the rebel, and some fun anecdotes from the ceremony.

Rajeshwari Sharma hails from a conservative Tamil Brahmin family herself. “I got married very early, at the age of 21, and moved to Australia with my husband, who was 12 years older than me,” she told The NewsMinute.

An IT professional based in Australia, she and her husband decided to separate after almost 17 years of marriage – and since he was a mostly absent father, the children did not find it all that hard to adjust. Sandhya, her daughter soon announced her intentions to marry Sam, an Australian national, but added that she wanted to have a traditional Hindu ceremony.

“We loved the meaning behind certain wedding rituals,” explains Sandhya, adding, “That is why we decided to get married in the traditional Hindu way and not have another wedding in Australia.”

The wedding took place in Chennai last year, and the wedding party stayed true to most of the rituals – what with Sam donning a traditional veshti, tying the thaali around Sandhya’s neck, the works.

“I very much wanted to be a part of my daughter’s wedding and so I decided to be the one who had to give her away in marriage,” says Rajeshwari.

While she had expected to be banging her head against a wall in trying to find a priest who would agree to bend the rules, she was pleasantly surprised to encounter Raghavan, a young priest who she had met at her niece’s wedding, with whom the idea resonated. “He was very understanding and agreed to conduct my daughter’s wedding as well,” she says.

Raghavan, currently based in the US, says, “She was indeed a major part of her children’s lives. She was their mother, father, and friend. It would be more meaningful to oblige her wishes. There was nothing more satisfying that day than to watch her sense of fulfilment.”

“Having spent most of her time in Australia has given my mother a different perspective to challenge the traditional society and its norms back home in India. We took the best out of its rich culture without being bound by customs that are discriminatory,” Sandhya says.

The album uploaded by the photographer was soon noticed by his followers and circulated and shared widely. What helped the audiences catch on with what was going on, was a picture with the bride, Sandhya, on her mother's lap, as her groom, Sam prepared to put a necklace around her - which instantly went viral and even scored a mention from Shashi Tharoor.

Terrific story of a single mother who performed kanyadaan for her daughter: https://t.co/Z9xCiMGKj2

Varun Suresh himself put a heartwarming note up on his blog as an ode to the couple's unique celebrations.

"Almost a year ago, Raji (the bride’s mum ) wrote to me. She was at her affable best from the very first email. I was not sure what to make of it because in times we live in, good nature warrants suspicion. I must admit I was far too cautious. Finally, the day arrived. The four days that followed wasn’t what I was remotely expecting it to be. I have been photographing weddings for a little over nine years now and it is very rare that a wedding overwhelms me with genuine happiness. Thank you for letting me be a part of your joy, Sandhya, Sam, and Raji," reads an excerpt from his post.