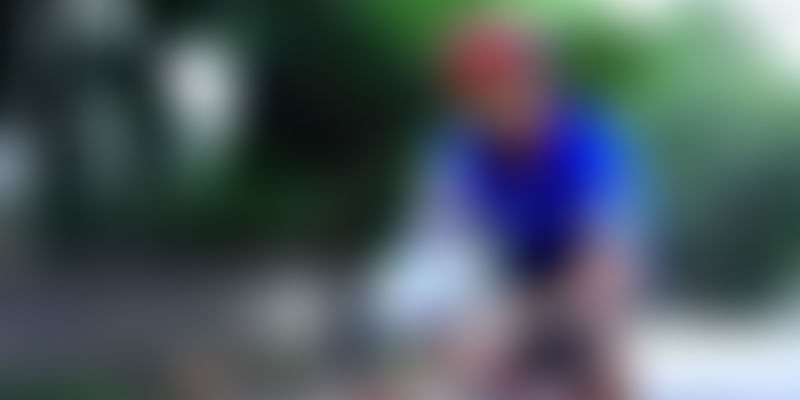 Two-time Silver medalist, para-athlete Divij Shah lives by the maxim that fear is the greatest disability of all.

Some injuries heal faster if you move forward.

This is not just a simple motivational line, but a powerful statement that Divij Shah lives by.

It is rare to see this sort of wisdom in a 26-year-old considering Divij is no ascetic. A financial analyst at InMobi, he also wears two silver medals won at international sports meet with pride.

Since he can remember, Divij has been on an onward journey, moving from one personal milestone to another.

Use what you have

“At the age of six, I was facing failure,” he tells me over a call from Jakarta, where he is based temporarily. Divij’s father, who was an avid cricket player, had enrolled him at a cricket camp in Kolkata, where they lived. Much as he tried, Divij could not hit the ball.

The fact that he had only one arm to do the playing with was just that, a fact.

He then showed him a trick to use what he had. Divij would hold the bat in his left hand and when the ball came near to be hit, he would take the support of his right residual limb and hit the ball much to the surprise of the baller. Needless to say, he became a nuisance for the ballers once he had unlocked the secret mantra given by his father: “Use what you have.”

Right now, he is dreaming of winning India a Gold at the 2020 Paralympics to be held in Tokyo. “It is time for Gold now,” he tells me as he trains hard to make his dream come true. Though Divij went on to play cricket for West Bengal for the Under-16 team, he shifted to cycling as a competitive sport.

Divij, who had started working in Bengaluru, took to cycling when he could not handle the city’s crazy traffic. He found that he enjoyed cycling and came in touch with the Aditya Mehta Foundation, which is helping para-athletes achieve the impossible. In his spare time, he volunteers for the foundation helping other athletes.

“A cyclist has to go through a lot of wind resistance. I realised that I have one less arm which saves me 10 percent energy and I thought I can use this to my advantage,” he says. Divij went on to win the Silver at the Asian Para-Cycling Championship in Myanmar this year. He had earlier won a Silver at the Bahrain championship.

Talking about the Bahrain race, Divij remembers it to be a very windy day. “There were cross-winds and the sun was shining down hard. I got a little wobbly and my speed dropped,” he says. At times like these, even a little motivation goes a long way. And in his case, inspiration came from a most unlikely source. “When I was at the 8 km mark, my eyes fell on the stands where someone was holding a placard that said: ‘Fame is temporary, Facebook posts are permanent’.”

At this competition, due to a few glitches, the Indian contingent had been close to being disqualified. “From not being permitted to participate and never having won any medals, we went on to win all the three medals,” he says.

At the prize ceremony, when three Tricolours were hoisted and the National Anthem played in the background, it became the stuff of legend. “All that, plus a Sheikh standing next to you saying ‘Mashallah’ was priceless,” he adds.

Divij also recalls the recent race to the Khardungla Pass which was one of his most painful races in recent times. “But I found a whole new level of consciousness and inner strength I did not know I had,” he says.

Co-founder and CEO of NowPurchase Naman Shah, Divij’s school buddy from their Kolkata days at St Xavier’s collegiate school, says, “I first met Divij around 20 years ago on the first day of school, he came and sat at the same desk given our surnames. I remember forming a close bond with him from tying his shoelaces to being amazed at how fast he could write during exams. This guy has a determination level which is unparalleled, be it cricket, dance, and now cycling. He has finally found his calling.”

According to Naman, Divij never thought of his condition as a disability. “I remember him telling me that no one can meet him in arm wrestling. He has a combined strength of two hands in one.”

Naman says it is an inspiration to everyone who hears his story. “It made me realise that there is no reason for one to complain. It is upon us to work hard, have the determination and succeed.”

It was April 6, 1994. Divij can never forget that day. He was at his grandmother’s place and playing around like any four-year-old. His parents had got into a lift and just then he rushed out to hand his mother a paper plane that he was done playing with and wanted her to trash.

Since it was a collapsible gate lift, he pushed his hand through the grill to give the toy to his mother. Just then someone pressed the lift button from the ground floor, and in a split second his arm was severed from his body landing on his mother inside the lift with blood everywhere.

“I just stood there. The shock was so intense that I did not feel any pain nor did I cry. I walked into the house and told my nani, look what happened. And then I fainted,” Divij recalls the incident.

From that young age, Divij believes pain has been an integral part of his life but credits his parents for being the moving force behind him. It takes great courage for a parent to push their child who has gone through such a traumatic experience like Divij has.

“My father said, it doesn’t really matter what you don’t have, the only thing that matters is what you have and what you can do with it,” says Divij, who considers his father his hero. On the cricket ground as a young child facing failure, the only thing that kept him from giving up was the thought that his parents would also give up if he did.

Divij also drives a car. It is a regular car and not an automatic one, he tells me. But he has not been issued a license. “I believe it is not the government who should decide what I can do and cannot do. They should set the expectations and watch us make it or even surpass it,” he adds.

With his will as his most powerful tool and Nick Vujicic’s (motivational speaker born with tetra-amelia syndrome) inspirational line as his guiding principle: ‘Pain is pain, broken is broken. Fear is the biggest disability of all,’ Divij makes sure he is always looking ahead.