The tightrope between romance and professionalism at the workplace 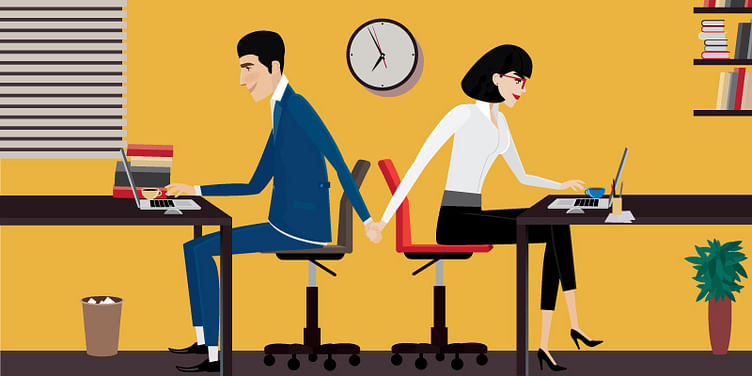 What do you do if you become aware of a romantic relationship in the office? Companies need to treat such instances with not just professionalism but also with empathy and discretion.

Most companies, certainly the large ones, have policies around romance at the workplace. The subject isn’t black and white and there are several shades of grey. Professionalism is a relatively recent value that has gained greater acceptance in the last few centuries after the Industrial Revolution. However, romance and love were programmed into the DNA with Adam and Eve. As societies progress and the gender balance at the workplace becomes better, these two keep coming into conflict periodically.

The stand that most reasonable companies take is that office romance is perfectly alright provided it does not alter the professional dynamics at work or does not offend the sensibilities of colleagues at the workplace.

Let’s discuss this with some real examples:

If ‘A’ reports to ‘B’ and they both find each other attractive, then others team members who report to ‘B’ will soon perceive ‘A’ getting undue benefits or enjoying unconstitutional authority. This is perfectly natural. Hence, this cannot be allowed to continue. If ‘A’ and ‘B’ still wish to pursue a romantic relationship then they must be moved to different teams where professional interaction between the two is minimal.

What about a husband-wife set of co-founders? How would they be perceived by the team? When the startup is still small the effect of this wouldn’t show up easily. Some people though tend to be more easily offended than the others when it comes to the ways in which such a deep personal relationship impacts professional interactions and outcomes. These sensitive individuals may get upset and leave. My own belief is that as the startup grows one of the two co-founders must move to a non-executive role in the interest of the firm.

Is it alright to hire the spouse of an employee in a different function? If the employee is at a senior level (say, a management council member) I would not recommend hiring the spouse for any role in the organisation. If the employee is relatively junior and the spouse is considered for a role that does not call for a lot of interaction with the employee, then it should be alright.

At one of my last

Organisations, there was a case where a woman who was the HR partner for the marketing function had a romantic relationship with a marketing manager. Both were married and had kids. Most people didn’t know about this relationship until it soured. This raises two questions: a) was this relationship violating a professional code? And b) what should the organisation have done when it came to knowing about it? An HR partner is in a position to influence the rewards of individuals in the team she partners with if she chose to do so. She had access to all the sensitive information about the team and was also the trusted adviser to the Head of Marketing. Therefore, there is a violation of professional code if she has a relationship with an individual in the team. If the company comes to know about it, one of them should be asked to take a role change.

In this particular case, there was no voluntary disclosure and the relationship was discovered after it soured and got messy. Both of them were called by a senior HR manager in the company and given a warning. They were told that they must discontinue this relationship or change roles. Both confirmed that they would behave in a professional way. The bitterness of the break-up was deep and the promised change did not happen. Bitter WhatsApp exchanges continued and the bitterness permeated to other team members. Both had to be asked to leave. Both Pooja and Sandip (names changed) were good performers but the attraction, and the subsequent mess proved costly for their careers. Pooja came from a conservative family that would not have easily pardoned an affair. I liked Pooja a lot and was worried for her. But it was a difficult call we had to take in the larger interest of the team and organisation.

A month later, her LinkedIn status had not changed. I reached out to her to check if she needed any help in finding a job. Her response put my worries and guilt to rest. She explained very maturely that the love she did not find in her personal life she found here in this relationship at the workplace. She had introspected and realized the futility of the affair when she discovered that while she had entered the relationship out of sorrow and emptiness, Sandip was just having some fun on the side. In the last 30 days, she had made peace with herself and found renewed happiness with her little daughter and husband. And she had got a job that did not reflect in her LinkedIn profile yet. I slept peacefully that night.

Love, romance and infatuation are far deeper than professionalism, and therefore romance at the workplace needs to be handled with empathy and understanding.

We are talking of two-way adult relationships based on mutual consent here. The best way to nip romance that can hurt professionalism at the workplace is through continuous education. Organisations do a poor job of this, and when such issues come to light some of them immediately begin to pronounce moral judgments and indulge in mud-slinging. While one needs to do everything to nurture and maintain a professional workplace, it is equally important to deal with such cases without any moral prejudice, and with the confidentiality and grace they deserve.