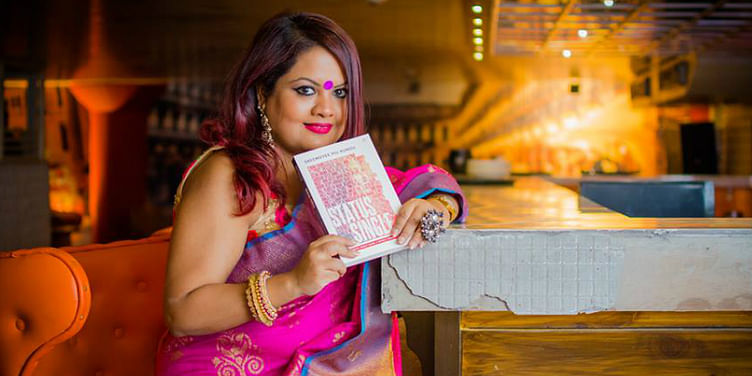 The latest of Sreemoyee Kundu’s four novels is a compilation of her own journey as a single woman interspersed with interviews of 3,000 others, including disabled women and those belonging to the LGBTQ community.

Dubbed the Queen of Indian Erotica, the latest of her four heartbreakingly true-to-life novels (going on five) is a compilation of her own journey as a 40-year-old single woman interspersed with interviews of 3,000 others, including disabled women and those belonging to the LGBTQ community. Braving the usual suspects – from garden variety trolls to self-appointed upholders of Indian tradition – she now tells her tale to YourStory.

Raised by a single mother in Kolkata, Sreemoyee went to Jadavpur University to pursue history. A reporter’s opening in New Delhi was the commencement of her decade-long career in print journalism.

She began as a lifestyle reporter and grew to the ranks of features editor at the age of 26, heading a team of over 20 people, and writing mainly on women, popular culture, films, food, fashion, and travel, through stints in senior roles at Mid-day, Metro Now, The Asian Age, Bombay Times, and India Today.

Her fictional debut, Faraway Music, had been breeding inside her ever since she became a journalist, as because it was her first, it was also autobiographical in many ways, she says. Four-and-a-half years ago, on a holiday to Australia, she decided she would quit and fulfil that pipe dream of writing the novel.

Nandita Aggarwal, of Hachette, signed her on. The book, the story of a famous writer who returns to her hometown and is confronted with the shadows of her past, was critically lauded.

Sita's Curse, her second, however, took a diametrically different direction. Sita’s Curse wasn’t meant to be erotica; it happened very organically. A certain Gujarati housewife Sreemoyee would encounter daily, on her way to work in Mumbai, inspired the character of the protagonist. “Hanging clothes on a flimsy plastic wire, casually running her hands over her full breasts, or watching the rains fall softly. I began conjecturing, trying to etch mental images of her personal life, the manner in which she seemed trapped, repressed,” she says.

26/7 changed everything, including that unspoken relationship that had been thriving on friendly, knowing glances. “I was hospitalised because of a serious viral infection I contracted from being in the dirty waters. When I resumed work, Meera was missing, and I never saw her again. Sita's Curse is, in fact, my tribute to her unsung life and desires,” she says, adding, “It explores the many facets of Meera, of womanhood, in all of us. The woman. The wife. The daughter. The mother. The lover. The whore. The Goddess.”

More importantly, the novel explores serious subjects like marital rape and the deeply complex and primordial relationship between religion and sex, and the ignorance we feign when thousands of women are paraded to so-called Godmen.

Meera stirred something in everyone who read it - a gay man came out to her, saying there was a Meera inside every man too; a naval officer read the book out to his pregnant wife to rekindle the flames.

The overwhelming response to Sita’s Curse, India’s first feminist erotica, caught her off guard. The book released in 2014, the year BJP came to power and her publishers were tense that with a title like Sita’s Curse, the book might invite controversy. However, soon after its release, a seven-city tour, and glowing press reviews, the book was hailed as path-breaking and she was honoured with the epithet of “queen of Indian erotica”. It even won her the NDTV Woman of Worth award.

Her third stride, You've Got the Wrong Girl!, was lad lit – a space largely dominated by male writers. But Sremoyee thought to herself: “Why can’t a woman get into a man’s head?”

“Romance is generally perceived as a woman’s territory but writing is gender neutral. You’ve Got The Wrong Girl! looks at love and romance from a man’s viewpoint — is the search for a soul-mate just as complex for a man?”

Now, three books down, the single survivor was turning 40 years old in December 2016 and celebrating her birthday with the extravagance of a wedding. But certain friends and family responded to her invite saying they would attend next time for a “real occasion”, or a “happier time” - nauseating stereotypes that Sreemoyee decided to demolish.

She would often use social media and her columns to express her trials and tribulations as a single woman. One fine day, her agent asked her to consider doing a full-length novel on her life. Status Single was to be an unabashed celebration of a woman’s 40 years of surviving, dealing with loss, bad decisions, wrong men, lost career opportunities, friendships, and most importantly, the courage and wisdom she amassed over time.

“I wasn’t going for a self-help book - claiming that the 40s are the new 20, that is plain bullshit. I wanted to denounce the centrality of marriage and the validation it brings to our womanhood. I wanted women to stand tall, even if we are sans a partner/child,” she recalls.

She didn’t want the book to be solely autobiographical and decided to get a cross-section of women involved, to speak their diverse but common truths.

Status Single came to house interviews of 3,000 urban women that she interviewed in a span of one year. “The story that I hold very close to my heart is of transgender single mother Gauri Sawant, who adopted the five-year-old orphaned daughter of a sex worker from Kamathipura in Mumbai. Or, the story of Nita Mathur, who, haunted by the rejections in the arranged marriage market and because she was always asked if she was a virgin, finally underwent a hymen reconstruction to get a ‘Barbie doll’ vagina,” she says.

The marginalisation of the entire community is something that she could relate to at a deeply personal level. “There’re no dedicated support groups, communities, apps or websites for single women – and I think there is a huge lacuna,” she opines.

Leave no woman behind

But even in this safe space, she had conjured up, conditioning made it impossible for some women to feel secure and valid. When Sreemoyee shared the final drafts with the women she had interviewed, 20 percent pulled out because a lot of them feared social ostracisation – many the ire of their bosses and colleagues – and some despite their names being changed on request, felt threatened.

“I almost thought I would not be able to hand over the finished manuscript to the publisher – and at some very deep level I was so let down by my own sex – for their conditioned lack of confidence,” Sreemoyee recounts.

Despite the issues, Status Single became the cover story for LA Times and The Guardian. Having said that, she echoes the opinion of myriad other writers – who have noted that books by women, about women, for women, are written off as "chick lit" and often devalued by publishers - in terms of lesser signing amounts, fewer copies, lower compensation etc. That’s why when it came to finding publishers for her four books - especially the ones dealing with women's sexuality that Indians and conservatives, in general, are uncomfortable with – Sreemoyee was up against everyone from conservatives to money-mongers.

“Indian publishers are clichéd; editors report to marketing teams. They’d rather do cookbooks by pretty chefs, and inane books by just about any Bollywood personality than actually put their money on brave books on burning social and environmental issues. In India, our sexual expression is always suffocated by an overarching religious and social system that looks at desire as a dreaded disease,” she reveals. “So, I promote the hell out of my books, always ask and fight for a marketing plan and ensure the publisher has a stake in selling the book,” she says.

Coming up next will be Sreemoyee’s memoirs, titled Bad Blood, and possibly a book on Indian men and their battles, called #mentoo.