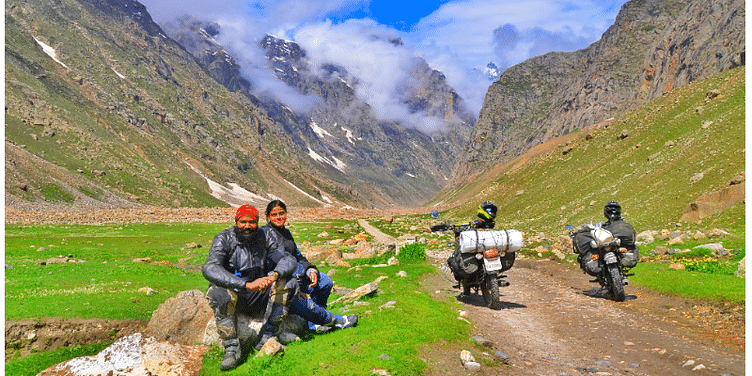 Pune-based startup operates India’s largest campsite in the Western Ghats and promises unseen experiences to its customers. In the future, expansion in northern and northeastern India is on the cards.

Based out of: Pune

“All journeys have secret destinations of which the traveller is unaware.” - Martin Buber

Pune-based Tourbugs treats travellers with such “secret” destinations. Or so it claims. The idea of Tourbugs originated in late-2015 when Founder Arvind Singh realised that there were enough takers for his travel blog in which he narrated his trails across India. His readers urged him to take them on those select “experiences” he was having.

Arvind, then pursuing a career in oil and gas, was a weekend traveller. He quit his 10-year-old “cubicle-bound” job in 2016 to register Tourbugs. Along with his wife and Co-founder Arti Navindgikar, he started offering camping services to his “friends circle”.

The focus was on curating rare, unseen locations and unheard-of experiences which no one else was delivering at that time.

Two years on, Tourbugs operates India’s biggest campsite spread across 350 acres in the Western Ghats in Maharashtra. A second campsite is coming up this weekend near Lonavla, and three more will be up by September.

Tourbugs has hosted over 4,500 people so far, and has been the venue for corporate offsites, brand events, family weekend getaways, solo travel, camping activities, and more. While campsites form the core of its business, the startup also conducts personalised biking tours to Ladakh, Zanskar and Spiti Valley between June and September — the camping “off-season” brought about by heavy monsoons in the Ghats.

“It all started with small rides around Pune. We began motorcycling and camping with friends, and gave them the local experiences they enjoyed. We were close to Mumbai, so a lot of people joined us over the weekends. It was also a time when not many tour operators were delivering such experiences.”

Tourbugs did a “business deal” with the landowners at Bhor in the outskirts of Pune and set up its own campsite in the backwaters of Bhatghar Dam. The breakthrough came in early 2016 when Royal Enfield approached them for one of its biking events.

Arvind says, “Royal Enfield was a success. We hosted about 275 people for the event. Before that we would have 30-35 people camping on weekends. But after that, we took off. In the New Year season, we have hosted close to 300 people at a time.”

Since Royal Enfield, Tourbugs has had corporate clients from Mahindra Group to IBM and others. More conversations are on, says the founder, for events and customised tours.

With India’s travel industry booming in the last few years, umpteen package tour operators and services have mushroomed all over. Biggies like Airbnb also want a slice of the burgeoning market with offerings like ‘Trips’ that curate interesting local experiences for travellers. Similar to what Tourbugs does.

How does small-scale Tourbugs keep itself occupied in such a scenario?

Founder Arvind notes that families love Tourbugs and are their key clientele. Unlike other campsites, which are largely dominated by “bachelors” and solo travellers — sometimes even hippies — Tourbugs sees maximum traction from family outfits that are taken care of in a manner befitting them.

“About 80 percent of our clientele is families. They don’t worry about budgets and are happy to employ our slightly premium services. We conduct the camping keeping their safety intact and give them the experiences they would like. We also try to keep them away from bachelors [which seems to be a requirement for most Indian families].”

It also helps that families, unlike backpacking solo campers, are wont to spend more. Hence, they opt for the full deal: tents with a view of the backwaters and lakes, a sunrise to wake up to, comfortable sleeping mats and pillows, food and barbeque over bonfire, fishing and exploration of local wildlife, and so on. “Once they have booked with us, everything is unlimited,” Arvind says.

Budget travellers, on the other hand, tend to occupy smaller tents, avail fewer experiences, and sometimes rent camping gear only. But, that is important too.

Rentals form a notable part of Tourbugs’ business. It has “kept aside 100 tents” for trekkers, who also rent stuff like sleeping bags, mats, BBQ sets, etc. “We get new customers from rentals,” Arvind says. “We have also bought hiking gear like ropes and so on, which we will start renting out soon,” he adds.

When torrential rain makes camping a no-no in the Western Ghats, Tourbugs takes off for Leh-Ladakh and Spiti Valley. The tours start and end in Leh, and the startup takes care of the trails, local experiences, accommodation, food, and so on. There are bicycle, bike, and SUV tours to choose from.

Biking tours are the most popular, with the founders having been “serious bikers” themselves. Both Arvind and Arti have led biking tours in Ladakh and Spiti, and have successfully drawn the biking community.

Arvind observes, “People want to take tours where I am there. Though we have a team which is there to support and interact with every group, they think Tourbugs is equal to Arvind. That can be a challenge at times because we have to take special care of everyone in high-altitude locations.”

Groups of 10-12 are chosen for each tour. Tourbugs has partnerships with local vendors who take care of the logistics. Underexposed homestays are chosen for accommodation. Locals are roped in to curate flavourful cuisines and experiences for its clientele.

“We don’t reveal everything in our itinerary. There are secret places we surprise our travellers with. We take the locals into confidence and go beyond tourist roads. Every group has a captain from our side.”

Tourbugs says their Ladakh tours find a lot of favour with foreigners, who form over three-fourths of its clientele. “Even the vice president of Citi Bank has travelled with us,” Arvind reveals.

Tourbugs makes no bones about the fact that it is still a small-scale operation. Because it is not a tech-enabled business, scaling up takes time.

But, it thrives in the knowledge that it has a sticky and loyal customer base, which many tech startups would give an arm for. Arvind says, “Everyone in the camping community knows us. We are already pre-booked for the launch of our new campsite.”

While Tourbugs might be the go-to service for camping in the Western Ghats, it is yet to ring a bell for the rest of India. That will change as the startup looks to add more tours in northern and northeast India. It has conducted recces of locations and will start services shortly.

There are plans to chart foreign shores too. UK, Malaysia, Singapore, Bhutan, and Nepal are on the horizon. But, that could take time because funds are in short supply.

“We are self-funded so far. We are also overbooked for our own setup. Before approaching investors, we would like to ramp up our facilities and chalk out an expansion plan. It will happen in a few months.”

Going ahead, tech will take over. Tourbugs envisions itself as a “marketplace” like MakeMyTrip where travellers across the world can book tours and experiences. But unlike MMT, Tourbugs’ own team will be fulfilling those tours for its customers, making the startup both a product and a service. “We’ll set up that team as soon as we are funded,” Arvind says.