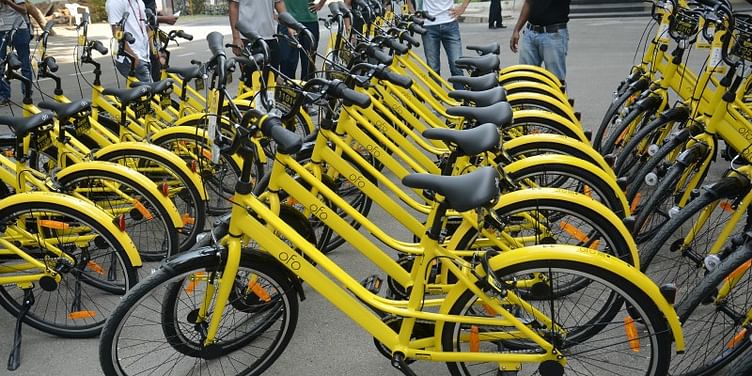 Key players are pedalling their way into the nascent Indian bike-sharing ecosystem.

Bike-sharing seems to have become a buzzword this year. Since the end of 2017, the number of players entering the bike-sharing space in India has been growing, and with good reason. With the growing traffic snarls, trying to reach somewhere fast is often quicker on bicycles.

However, India is still a new market for bike sharing. Until last year, bike sharing was a big game in China and the US, with Chinese bike-sharing unicorn Ofo and New York-based player Citi Bike leading the way. But now, India is in a position that has made it the next market to conquer, not just for the Chinese titans, but for homegrown startups too.

According to media reports, the bicycle market in India is worth $1.2 billion, and production currently stands at 15 million units. The key players in the space are:

Last year, Ola, India’s ride-hailing unicorn announced the launch of Ola Pedal. Aiming to offer easy last-mile connectivity, especially for trips that were too short for a taxi and too long for a walk, Ola Pedal had piloted on IIT Kanpur campus.

In November 2017, Zoomcar, the Bengaluru-based car rental platform, launched PEDL, its cycle-sharing vertical in Bengaluru’s HSR Layout. According to Greg Moran, Co-founder and CEO, Zoomcar, the ratio of population to motorised vehicles in most urban cities has reached unsustainable levels resulting in clogged roads, bad air quality, and reduced productivity. The company is looking to expand its cycle-sharing vertical across the city, and the country.

Founded by Amit Gupta, Co-founder of mobile advertising platform Inmobi, Yulu offers IoT-based bicycle-sharing solutions to resolve last-mile connectivity. According to Amit, big personal vehicles should be replaced with smaller and efficient clean energy vehicles. “These vehicles also need to be scalable and shareable so that the overall cost of ownership is low and the utilisation is very high,” says Amit.

To operate Yulu, users need to install the app and load their wallets using Paytm, UPI, credit cards or debit cards. The platform works on a pay-per-use model, where users will be billed for every 30 minutes of use. Yulu also generates revenue from advertising on bicycles and data from its usage.

Each bicycle has a QR code and a cycle number. Users get an unlock code on the app, through which they can unlock the cycle. They can then ride the cycle to the required destination and drop it there. They then lock the cycle, which is available for other people to ride.

The team is launching more cycles in cities it already has a presence in like Delhi, Bengaluru, and Chandigarh. It claims to have over 140 cycles and more than 500 users.

Mobycy allows one to rent a bicycle by the hour and, after use, it can be parked anywhere for others to pick up and use. Mobycy bikes are now available across public places like Delhi metro stations, North and South Campus of the Delhi University, and the Huda City Centre.

The Mobycy app shows the user bikes in the vicinity. After use, the cycles can be parked anywhere at public pavements, except inside private compounds or gated colonies. The app has a smart GPRS-tracking device installed to prevent thefts. Founded by former MobiKwik VP Akash Gupta and former S&P Capital IQ executive Rashi Agarwal in 2017, the company has raised $5,00,000 in seed funding.

Bicycle-sharing startup Mobike was acquired by China’s Meituan Dianping, and Ofo started as a campus bike-sharing platform. Ofo, which is present in 21 countries, claims to have clocked over 1.1 million rides in just 10 weeks of operations in India. Globally, it has 32 million rides per day, of which 30 million are in China. It has 10 million bikes globally. While Ofo launched in Magarpatta township in Pune, Mobike is set to launch in Kothrud.

Mobike has over nine million bicycles currently operating in over 200 cities across 16 countries. With India, Mobike enters its 17th country of operations in just over two years of inception.