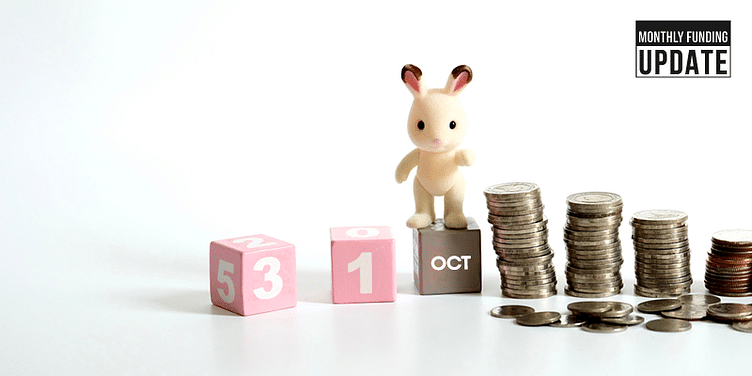 October turned out to be a somewhat dull month in terms of funding raised, closing at just $714.13 million across 51 deals. This was just 50 percent of what was raised in October 2017 and just over 25 percent of the tally in September this year. In the absence of $1-billion-plus funding rounds, can 2018 surpass 2017’s impressive $13.7 billion-mark?

October was very different from September 2018, which boasted large funding rounds such as OYO’s $1 billion, Paytm’s $300 million, and the much-talked-about B2B platform Udaan’s $225 million. According to YourStory Research, last month saw VCs pump in $714.13 million, which is just over a quarter of the $2.72 billion raised in the previous month across 70 deals. It was also just half of the $1.47 billion raised across 67 deals in October 2017.

Sanjay Anandaram, investor and mentor to early-stage funds and social impact funds, and a mentor at Sattva Consulting says,

“Venture businesses have a gestation period and time. Once bets are made, it takes 6-9 months to make the next bet. This brings in a shift and skew in the month-on-month numbers.”

So, while September saw larger and more late-stage companies raise bigger funding rounds, October saw more M&As, including acqui-hires. YourStory Research recorded 30 exits in the Indian startup ecosystem last month, as compared to 20 in September and 15 last October.  Pranav Pai, Managing Partner, 30ne4 Capital says, “You may have also seen an increase in the deal size. Larger Series B and Series C are contributing to the median deal size going up significantly. The deal size increase is a global phenomenon.”

There were a few interesting exits this month, with most notable being Mercer acquiring Mettl. Such exists, says an investor bring in an overall positive sentiment and attitude towards the Indian startup ecosystem. An analyst adds, “More companies raising capital means a growing number of acqui-hires and acquisitions. This, in turn, translates to positive sentiments and some form of exit for the investors.”

The Mettl acquisition is believed to have closed at approximately Rs 300 crore, which is 7x the $4.2 million-$4.8 million (about Rs 33 crore, depending on the conversion rate you apply) that the startup raised in equity funding over the years.

The exit is also one of the first successful ones for a SaaS business from India. For early investor Blume Ventures, the aggregated returns (seed and pro rata in the Series A round) is 7x the investment they made.

Naganand Doraswamy, who makes early-stage bets in B2B startups through Ideaspring Capital, says, "Acquisitions in $40 million to $100 million range are very critical to the health of the startup ecosystem in India. This acquisition is great as everybody makes money and also a quick exit."

Adds Sanjay, “Investors invest for an exit, and this is a good sign. Also, Indian companies like Airtel, Reliance Industries and TATA Communications are looking at Indians startups and are becoming active. This means they are engaging with startups and looking to invest in innovation. This also gives corporate houses access to newer talent, different style of working and also people who think and work differently.”

Some of the notable exits this month include:

Pranav explains that with larger late-stage rounds, the impetus on rapid growth and adjacency capture is becoming a high priority.

“Larger startups have begun acquiring smaller companies to quickly graph up into new strategies and deliver on market expansion targets. This is a good sign for the ecosystem and is another strong leap towards maturation that we definitively are moving towards,” he explains.

While the number of deals in September were nearly the same, there is a significant difference in the quantum of investments. Last month Delhi-NCR’s numbers were propped up by a host of late-stage deals, including PolicyBazaar’s $238 million, Paytm’s $300 million funding round, Paytm Mall’s $450 million and OYO’s $1 billion fund raise.

[Tiger Global raised $3.75 billion for its latest fund in October. Called the Private Investment Partners XI, the fund will reportedly focus on consumer internet, cloud computing, industry software and direct-to-consumer companies in India, China and the US. Earlier, in March this year, Tiger had participated in a Rs 400 crore Series E round raised by portfolio company Grofers.]

In the last few months, what stood out was the fact that there were also newer funds, both domestic and foreign, entering the Indian startup ecosystem. Several smaller domestic funds have emerged, sourcing capital from within India.

“These funds have a fund size of $40 million to $50 million. They are smaller funds and can invest in several early-stage startups. Overseas funds generally skew the overall dynamics of the Indian startup ecosystem by investing larger amounts in a select few startups. With these newer Indian funds coming in, they see and understand what is happening on the ground,” says Sanjay.

He explains that Indian startups and small businesses need large pools of capital. It therefore is important to get capital from investors across the value chain. Pranav says that over the last 12 months, new funds were closed by VC firms, which are making their presence felt with their deployments. This is contributing to the increase in deals.

November began with Meesho, the social commerce platform, raising $50 million in Series C funding. Other than that, it’s been a dull time, possibly because of the festive season. Funding raised in 2018 stands at close to $10 billion. It remains to be seen if the next eight weeks can move the needle enough for 2018 to cross the $13.7 billion raised in 2017.