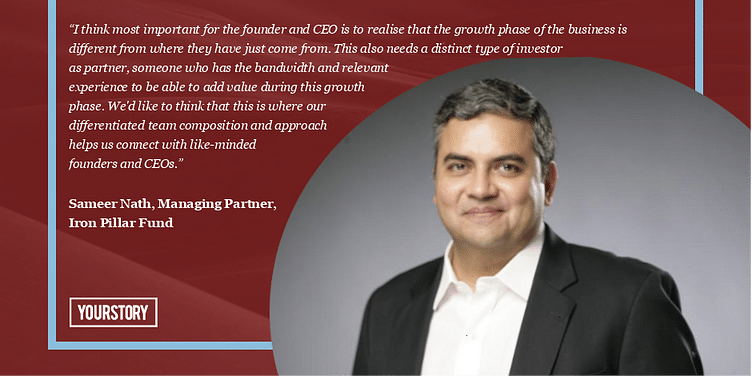 If you speak with any entrepreneur who’s worked with India-focused venture growth investor Iron Pillar, they’ll tell you that the primary attraction was never the capital.

Instead, it is the venture fund’s six-member founding team, who – with their rich and varied skills and experiences – inspire the respect, trust, and confidence of enterprise startups looking to enter the next phase of growth.

Together, the six offer Indian entrepreneurs their expertise and experience in the areas of investing, exits, and business building. And with that, they play a crucial role in helping fill the void in the mid-stage technology investment space in the Indian startup ecosystem.

The idea that gave birth to Iron Pillar

Indeed, the very idea to start a mid-staged focused fund, came from one of its founders, Anand Prasanna. Anand, who having observed the investment trends in the Chinese market, knew it was only a matter of time before similar opportunities began to take shape in India.

Anand’s hypothesis was that the vibrant early stage ecosystem in India had created a critical mass of companies that needed growth capital (Series B, C or D). As such, the need for a fund like Iron Pillar existed. And yet, to do justice to this mission, it was important to build a team that was armed with the right skill sets, specifically in investing, exits, and business building.

Anand discussed his “venture growth” idea with Sameer Nath in early 2015. For Sameer, an investment banker with 15-years of experience in handling dozens of U.S.-India and cross-border technology transactions across the M&A and IPO spectrum, Anand’s idea resonated with him long after the initial discussion.

The duo, who had known each other for several years, then went on to have a series of in-depth discussions over the next few months to further validate the investment strategy, after which they decided to take the plunge and co-found Iron Pillar.

The duo had reached out to Mohanjit Jolly, who was sold on the vision of Iron Pillar at the get-go. As a primarily early stage investor in India in the late 2000’s, Mohanjit knew first-hand the chasm that existed between early-stage funding rounds and the later stage rounds. Indeed, getting from the early stage “A” to the late stage “D” was non-trivial.

However, Mohanjit needed more convincing on the founding team that was going to be assembled. In fact, he was very clear from early on that having the right people on board was crucial, reasoning that his own best and worst experiences in his career had been because of people. Thus began a “dating ritual” that went on for several months until Mohanjit eventually signed up to join the team.

With Anand’s experience at Sequoia early in his career and later as an LP running Morgan Creek’s Asia office and Mohanjit’s nearly 15-year experience in investing in seed and early-stage startups at Garage and DFJ, the team was now armed with the required investing experience.

Sameer, whose older brother Sanjay Nath co-founded Blume Ventures, brought the complementary and crucial “exit” skill set. Sameer, in turn, convinced Harish Hulyalkar, a colleague from Citi who was running Citi’s M&A business in India, to come on board.

Ashok, a serial entrepreneur who is also an old friend of Anand’s, came in next. Ashok’s first startup was Vertebrand, a brand consulting company. His second was Taxiguide. The last partner to join was Ashish, now CFO at Iron Pillar. Ashish had worked as CFO of 3i Asia, a billion dollar private equity fund, and as such, had the business acumen and attention to detail that was required in this role with Iron Pillar.

And so, within a year since that initial discussion of the “venture growth” idea, Iron Pillar became a reality, with all 6 founding members assembled. In January 2016, it was formally launched.

“We all knew that the entrepreneurial opportunity in India over the coming years was massive, and that we wanted to be part of that journey, not just as spectators but as deeply immersed participants, helping make that vision a reality,” Mohanjit says.

Iron Pillar, which engages in Series B, C, and D funding rounds, focuses on Indian startups in the enterprise and consumer technology sectors. It invests $5-$10 million for a variable stake in the company, ranging from as low as 5 percent to as high as 20 percent.

“This is because venture growth in India will yield that ownership range from a small Series B to a large Series C/D round. We are comfortable with this spread as long as it fits our investment parameters, targeted risk/return profile and gives us the requisite board role/governance/impact,” Anand says.

To be clear, the investment strategy for the firm is to create a concentrated portfolio where it can mitigate risks, but still provide meaningful IRR to its investors. The fund operates on the rationale that it will “walk the walk, rather than just talk the talk” by delivering returns in 5–6 years, rather than 8–10 years.

“We were not going to underwrite home runs necessarily, but nor were we going to take binary or mortality risk with our investments. It would be a concentrated portfolio where we would lead or co-lead, take board seats, and take an active hands-on approach to portfolio management,” Mohanjit says.

“We anticipate that our investment cadence will roughly be one deal per quarter,” says Sameer.“For a fund that had its final close in 3Q 2018, we expect to finish the year with 5 portfolio companies which we think is very significant and shows an active pace of capital deployment,” he added.

In the near team, however, Iron Pillar’s pipeline is expected to be skewed towards enterprise startups and the firm is spending time evaluating investments in other sectors such as health tech and software-as-a-service (SaaS). It also has an eye on fintech and content/gaming companies.

While Iron Pillar is India-centric, the fact that the fund’s partners have strong connections to the U.S. and Chinese markets is another strategic advantage. This also allows Iron Pillar to provide its portfolio companies access to a wide and growing network of global investors, corporates and markets.

Iron Pillar’s alliance with DVN, which includes 22 firms with $1.8 billion in collective assets, will provide companies in its portfolio the opportunity to tap into a wide network of experienced investors and innovative entrepreneurs across the globe. Tim Draper is also on the advisory board of Iron Pillar and is someone Mohanjit had worked with closely in the past.

As a venture growth specialist, Iron Pillar looks for certain revenue and financial/operating thresholds before investing in a company. These parameters are accordingly customised for consumer and enterprise tech companies.

“To elaborate, the cultural values that guide us are integrity, impact, dedication and transparency. While growth and profitability metrics are important, along with follow-on fundraising and "up rounds" to demonstrate positive momentum, the ultimate measure of success for Iron Pillar will be exits and achieving our IRR targets,” says Harish.

In short, that’s where the collective experience and skills of Iron’s Pillar’s strong 6-member founding team comes in, say entrepreneurs of growth-stage companies.

"The Iron Pillar team brings in unique and varied experience in business, finance and marketing which has helped us take the right decisions at crucial junctions. As we pursue our next phase of growth, it gives me and my management team a lot of confidence to know that their valuable expertise is always a call away," says BlueStone Founder & CEO Gaurav Singh Kushwaha.

This is particularly important as the demands for companies in this stage are markedly different from early-stage startups. This phase requires a distinct type of execution, distinct mind set to achieve the next level of scale, distinct organisation and leadership structure, and management style.

“I think most important for the founder and CEO is to realise that the growth phase of the business is different from where they have just come from. This also needs a distinct type of investor as partner, someone who has the bandwidth and relevant experience to be able to add value during this growth phase,” says Sameer.

“We'd like to think that this is where our differentiated team composition and approach helps us connect with like-minded founders and CEOs,” Sameer adds.