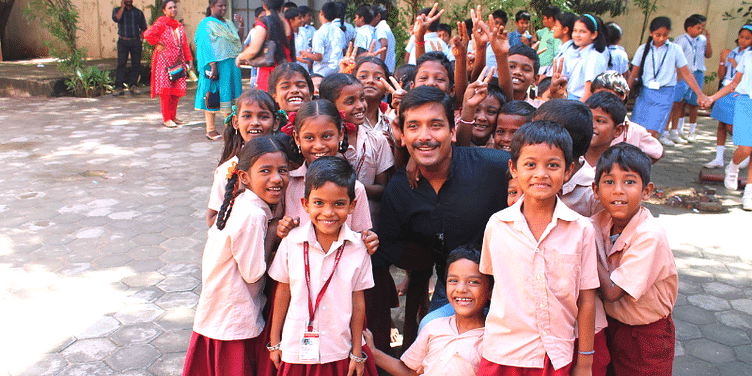 It was 2013. Sujith Kumar, who works at Infosys’ human resources department, had finished a career counselling session with college students in Madurai, Tamil Nadu, when one of the organisers told him about a small child waiting outside the hall to speak to him. She had only one question to ask but refused to enter the hall, so Sujith complied with the strange request.

He went outside to find a malnourished girl, not more than 12 years old, wearing rags, and clutching a large notebook to her chest. She asked Sujith about getting help to find a course that would guarantee her a job. He pressed her for more details, and soon her story came flowing out.

Her mother had passed away, her father was an alcoholic, and she was working as a domestic help to fund her education and support her siblings. Nevertheless, she was an excellent student who had scored top marks in her physics exams.

Sujith was incredibly moved by her plight, knowing that in his privileged job at a prestigious IT firm he could definitely afford to pay for her education. The next day, Sujith also realised that working in human resources had given him a wealth of contacts in colleges and companies that he never utilised.

In a conversation with Shradha Sharma, Founder and CEO, YourStory, Sujith Kumar and Punitha Anthony, Co-founders of Maatram Foundation, recall the conversation that set the ball rolling for the organisation.

“I randomly called a college chairman in Chennai and said I came across a student like this. Would he mind giving me one free engineering seat? The voice goes completely silent on the other side. I thought he was going to say no but then he gave me the most surprising answer. He said, 'I'll give you 20 seats, you can educate 20 children'. So, that's how Maatram Foundation started.”

A change in the air

Sujith spoke to a few colleagues at Infosys, including Punitha Anthony, to help him identify students for the 20 seats the engineering college chairman had promised.

Maatram, which means ‘change’ in Tamil, hasn’t stopped since, tying up with 35 engineering universities and arranging free higher education for 677 students from economically deprived backgrounds. The institutions provide free admissions, tuition fees, food expenses, and even hostel fees, where applicable.

The foundation uses an exhaustive five-stage system to make sure only the deserving get a seat. It keeps the identities of its candidates confidential to focus on their academic merit rather than their economic status. The organisation also trains their beneficiaries on various soft skills to improve their employability and get them ready for the industry.

Sujith adds that orphaned students have first preference, as well as girls, who comprise over 80 percent of the beneficiaries.

“We believe that when the girl in the family is educated, the generations to follow will always be educated,” he says.

Today, Chennai-based Maatram has an eight-member core team comprising working professionals who balance their day jobs with running the foundation. Maatram is present in five different states across India, but Sujith hasn’t ruled out going full time in the future in order to scale up their impact.

The organisation has been fortunate in that all the members’ families have pitched in to help during weekends, says Punitha Anthony. Getting her son to participate was very important to her, and every step of the way, spouses, children, and parents all volunteer. Maatram’s youngest volunteer is four, while their oldest is 92 years old.

The organisation has been open about trying to get in new people, as all of Maatram’s members play to different strengths. Sujith takes care of a couple of responsibilities, including securing college seats and funding. Punitha keeps an eye on the academics of the beneficiaries to ensure students are doing well. Sujith’s wife operates the Maatram helpline number.

“We call it a Maatram family; we do not call it a foundation, it's a big family. I think the support from each of our families has been tremendous and I think that is what has also been helping us move forward to take this to the next step,” Punitha says.

Sujith also credits the support he received from his manager and team members at Infosys, calling it crucial in making Maatram work. His Infosys colleagues have also participated in some of these activities. But highlighting the importance of commitment and discipline in volunteering, Sujith, who is often approached for volunteering opportunities at Maatram, stresses that consistency is key.

“Giving is really addictive. Once you start giving and when you see a transformation in a kid's life, you want to do more. And that is what we always want to go out and tell working professionals. Life is not just about 9-5,” he says.

Sujith says that the organisation is only reaching a small percentage of students who need help, but acknowledges how far they have come along.

“If somebody told us in 2013 that Maatrum would be this big, I would have had a hearty laugh at them. So, it is always about starting small,” Sujith adds.

In the future, Maatram wants to reach out to as many students as possible, and wants to partner with many educational institutions.

Sujith is also taking steps to ensure that Maatram’s legacy is preserved by getting their candidates actively involved in the process. During their interviews for potential students, one of the panelists is always a Maatram student. Sujith sees them as future trustees of the organisation, even perhaps leading it some day.

He recalls the example of a girl who secured a place in a top university in Chennai through Maatrum. She was from an economically backward district in Tamil Nadu, but was academically brilliant and was even shortlisted for a placement in IBM.

Sujith sat with her for two hours to help her through some mock questions, and she was confident that she would get a job with them. The next day, she called to let Sujith know that she had been placed. One of the last questions IBM had asked was: what did the job mean to her?

“She gave a very honest answer: ‘I told them this job means the world to me because it will uplift my family from poverty. That aside, I have 676 of my brothers and sisters studying in Maatram Foundation and I know if they see that I am placed in IBM, it will be a story of hope for the others’,” Sujith adds.

But it is not just the students who benefit from Maatram’s efforts. Sujith says the organisation has changed and enriched his life and the lives of his team members. His own son, he feels, has become more thankful and understanding of the world around him.

Maatram’s story has the potential to become a movement since it can be so easily replicated, considering the organisation uses social media and networking to connect with their partners.

“We don't have that much funds. So, we go to colleges and shamelessly ask, ‘Can you give me a free seat?’ What is the worst that can happen? They may tell me a ‘no’. I will shrug it off and go ask somebody else.”

The fact that nobody has said ‘no’ to Sujith so far goes to show that there are many agents of Maatram out there in the world.