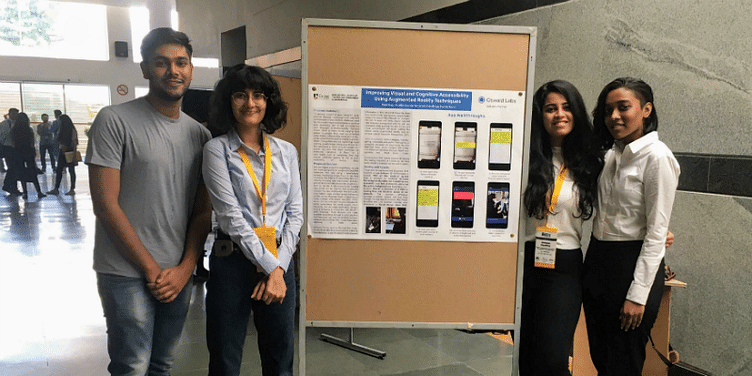 Augmenta11y makes use of Augmented Reality (AR) to help children with dyslexia read books using the camera on their phone.

Dyslexia is the most common learning disability found today. At its core, it makes reading - perhaps the most important part of school education - difficult. This is why children with dyslexia often do not get high grades though this has nothing to do with their intelligence. Currently, there are nearly 3.5 crore children with dyslexia studying in schools in India.

In order to bring a solution to this problem, four students from Mukesh Patel School of Technology Management & Engineering from Mumbai - Tushar Gupta, Mudita Sisodia, Schezeen Fazulbhoy, and Mitali Raju (all in their 20s) - have developed an app to help dyslexic children learn better.

The recently-launched Augmenta11y, available for free for both Android and iOS users, helps children with dyslexia read books using the camera on their phone. The app makes use of Augmented Reality (AR) to show the text in a dyslexia‐friendly format, and has several other customisable features that make reading much easier.

Tushar Gupta, a final‐year engineering student who currently leads the project, has previously worked as a consultant with startups and small and medium businesses (SMEs) for over four years now, and will be heading to Georgia Institute of Technology, Atlanta, to pursue a Masters in Human Computer Interaction.

Mudita Sisodia has worked on the research and development of Augmenta11y, and was previously a Udacity Google Scholar. Mitali Raju and Schezeen Fazulbhoy also worked on the development and ideation of the product and its underlying research.

“Augmenta11y is the result of an entire year’s worth of research and development. What started as a thesis project, with the support from Oswald Labs, has transformed into something that has had an impact on the lives of real children in schools. My team and I have had the pleasure of diving deep into this domain, and I believe we’re just getting started!”

Augmenta11y has several specialised algorithms implemented like detecting major objects, text stabilisation, and dynamic resizing to make reading easier. According to the team, during the beta stage, the app was tested by users from India, Malta, the Netherlands, Canada, the US, Ireland, the UK, and Nigeria.

In a research on 12‐14 year old dyslexic children using the app, the team found an average decrease of 21.03 percent in each student's reading time. Further, 93 percent of children agreed that a change in contrast between the background and the text, an exclusive feature of the app, helped improve readability. This means that a student spending one hour to read a chapter in his or her textbook can now finish it in 40 minutes.

Starting with Augmenta11y, Oswald Labs has set up a research fund where it contributes 10 percent of its annual profits into conducting new research and development for such technologies, and measuring the impact it has on the society.

The team has so far raised an undisclosed amount of funding from Oswald Labs Research Fund to build the app. Commenting about Shravan platform, Anand Chowdhary, CEO, Oswald Labs, said:

"We are very excited to open the Shravan platform and our technology to Tushar's team, who truly want to make an impact on how children with dyslexia study today."

According to the founders, there are not many apps to specifically help children with dyslexia. Some apps have specific features like text-to-speech and font changing (for example, Google Play Books, Mozilla Pocket, and Amazon WhisperSync), but they do not have the customisation abilities of Augmenta11y.

"Augmenta11y does not impose upon one reading pattern, but allows students to customise the contrast, typeface, space between letters and lines, etc., to fit their reading needs. This exclusive 'dyslexia-friendly mode' was invented by Oswald Labs two years ago, and introduced in their web accessibility product, Agastya. This feature is exclusive to Augmenta11y, and not available on any other app for smartphones," says Anand.

In the future, the team aims to add more features to the app to improve accessibility for dyslexic individuals.

"Through user feedback and multiple rounds of testing, we've identified areas where the app's functionality can be improved further. For instance, adding support for real-time translations in an AR environment will allow users to better understand their surroundings. This could be particularly useful when the user is presented with unfamiliar information, such as a textbook or signage in a new language,” says Tushar.

“Another point of improvement is the ability to customise the text-to-speech playback mode. We're looking to add a number of new voices (both male and female), and a way to control the tempo to aid children in understanding the pronunciation of certain words,” says Anand.

Also read: Meet Anita Sharma, the woman who is helping persons with disabilities learn to drive