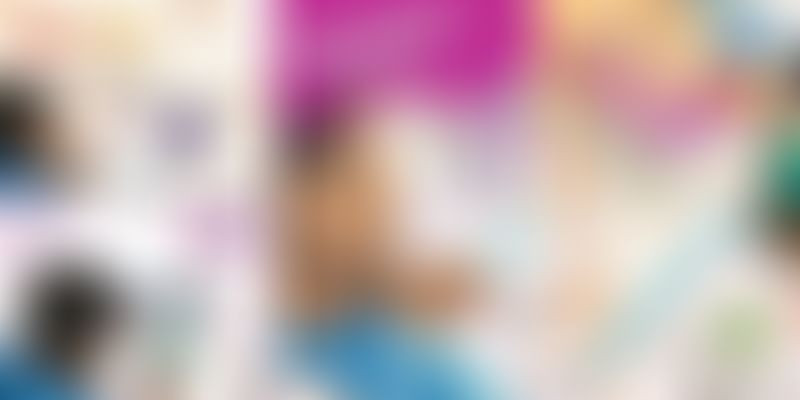 As any parent with a digitally native kid, Ajay Das was concerned about the amount of screen time his 7-year-old son was getting. He was more concerned that this time was spent in passive consumption of videos and mobile games and wished that the engagement was more creative, active and combined the physical with the digital in a better manner.

Ajay, who holds an M-Tech in Computer Graphics and Image processing from BITS-Pilani, and held various tech and R&D roles in companies such as LG, Samsung, Phillips and Motorola, decided to leverage his skills to design something for his own child. Ajay began by brainstorming about what he’d want as a parent to engage his kid with. He also wanted something that would create a fun experience that would make his kid want to continue to engage with, and not be something the child would be bored of after a few days. After much deliberation and leveraging his experience as a parent and his product design background, Skipy was born in March 2018.

The first prototype, though rough, was really well received by his kid and his friends who were endlessly fascinated with it. Having ticked that box and found his first customer, Ajay, who was always fascinated by startups, decided to become an entrepreneur and take Skipy to the world. Working together with his then-colleague, Divyeshakti Marwah from Manipal Institute of Tech who came on board as the CTO, Skipy as we know it finally became a reality after a year of perfecting it.

Skipy is a creative app and play kit aimed at building foundational skills in children. The toy is a simple kit based on mixed reality that bridges the gap between the real and the virtual world. Founded by Ajay Das, this Bengaluru based startup gives a child the sensory feeling of drawing on a paper along with rich and variable digital content into a single experience that is fun, entertaining and informative. The drawings and stories that the kids create, bring their inner storyteller to life and helps build their creativity and problem-solving skills.

Filling the gap in the KidTech market

Globally, the AR and VR market is expected to exceed a whopping $165 billion by 2024 and is seeing a growth of 80.8 percent. Added to this, the toys and games market is projected to exceed $135 billion, thanks to innovation in technology. While physical subscription boxes and AR-based solutions exist in the market, Skipy brings the two worlds together, creating a unique offering in the KidTech ecosystem.

“Creativity is an important 21st-century skill for children to possess. It is not limited to the replication of images or visually articulating what’s on your mind, on paper. We see that as the genesis of the creative thinking process. What they add by leveraging tech, is bringing a child’s creativity to life by animating it in the form of a story. When this gets honed, children can apply their creative skills for visualizing, ideating on and solving real-life problems,” says Ajay.

Designed for children, Skipy is an app-full of stories, games, greetings and learnings. It helps improve their creative skills, by encouraging them to draw on a paper, interact with it on the mobile and make their creations digital. Available on Android, and for free, the app comes with 40 short drawing exercises and seven stories, with more options available on purchase of the kit, which is available at a nominal price.

The Skipy Kit was created to amplify and complement the creative experience of the app, and is a box full of stories, games, greetings and learnings. Holding a drawing pad, stand, camera clip and joystick, the kit is a simple gaming kit that plugs into any tablet or a phone, instantly turning it into a toy for creative playing. Skipy makes a child think, imagine and create physical drawings that come alive in the virtual world, and is available on Amazon here.

1. Listen and draw all by themselves

Skipy lets kids choose from a large variety of engaging stories in English. It encourages children to draw alongside and helps them visualise the stories by bringing their drawings to life.

2. Have fun as they learn

Children can also play by drawing interesting characters, helping them make drawing become both fun and a daily habit.

3. Play with family and friends

Multiple children can use the same app, and track their progress separately. Over time the difficulty level of recommended stories and experiences adjusts to their drawing skills.

The app also has a share feature that lets kids share their creations with family and friends, get appreciated, and also get rewarded with an in-built gamified reward system.

Drawing their own path to success

So far, they have primarily worked with schools and educational institutions. “We have around 90 percent conversion on people registering for our service,” says Ajay.

More recently, Skipy was among the nine global startups chosen for the GMC Calibrator, an accelerator launched by Gray Matters Capital in April 2018. GMC Calibrator was started with an aim to make the mobile phone a device to promote the ‘self-learning to earning’ mantra by improving user engagement, monetisation and optimisation of mobile learning platforms.

Fresh and energised from the GMC Calibrator, Skipy is now gearing up for a global launch by September with multi-lingual content. They are also looking for partnerships for content and B2C distribution and sales. Partners could also be physical toy and activity boxes manufacturers, professionals involved in offline sales with play schools, and finally, educational ecosystem players.