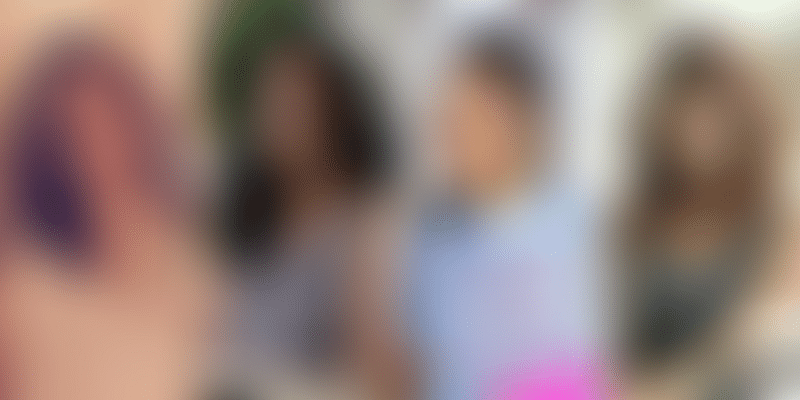 YourStory is the outreach partner for SheLeadsTech from Facebook

Across the world, the creative economy is one of the most rapidly growing sectors, in terms of income generation and export earnings, apart from being a flagbearer for a country’s cultural identity. But in India, the story is different. The creative industry here, with around 250 million artists and craftspersons, is a symbolic representation of the country's traditions, heritage and diversity, which are slowly disappearing. Dubbed as a 'sunset' industry for several years, these women entrepreneurs are doing their bit for its revival and preservation, and making it more relevant for the future.

They see a large growth potential for the creative space in India that's waiting to be unlocked, and are working towards promoting creative cultures. Read their experience about what it takes to build a thriving business in the creative category.

Prior to starting The Kala Chaupal Trust, Leenika Jacob worked in the areas of social and rural communication for agencies like JWT and Lowe Lintas. Art and craft were a significant part of her growing up years, as her mother was an artist and entrepreneur, “I have also been lucky to get cross-cultural exposure from small towns to metros in UP, as I was brought up in Bulandshahr and Meerut. My adult life was split between Delhi and Mumbai,” she says. Having travelled extensively around the world as well, she’s explored diverse cultures, and had the yearning to do more in India.

In 2018, she, along with Premila Singh, co-founded the Kala Chaupal Trust. “India is a land of diverse arts and culture which require a contextual placement in the current arts environment. The Trust was borne out of a yearning to work towards art collaborations that would be contextual to the present-day generation. We also are beginning to work on product curations using design interventions inspired by arts and crafts,” says Leenika.

The objective of the Trust is to encourage and promote collaborations between contemporary and traditional art practices to raise artistic tastes and also address local issues and environmental concerns. “We want to educate and mentor youth to aspire and actively pursue inclusive and collaborative arts and crafts practices,” she says, adding that they do this through the Guru Shishya programme.

On the challenges they face, she says, “Since we work in a collaborative space, it's a constant challenge to tie in government, non-government and private institutions to present a complete picture.” Another challenge is positioning the Trust’s intent and finding a position in the present-day arts and culture scenario.

Leenika says that competition is always great, and even better if you’re able to collaborate with your competitors in the creative space. “The only space we all need, inspirationally, metaphorically and realistically, is the creative space,” she says. According to her, it’s an uphill climb for startups who are building creative spaces in India, but adds that the rainbow at the end is also within sight.

She is excited about creative software and social media platforms as these have phenomenal reach amongst masses and breaks barriers in so many ways. “Creating a more creative knowledge exchange platform is an important journey to make from the tech perspective. There are real lives out there and real art and culture; tech has to carry that on its shoulders, or we may be in the danger of becoming a faceless homogenised environment.”

Based in Gurgaon, The Kala Chaupal Trust currently has 42 artists in 15 countries, and has also been part of the Atal Incubation Mission. On the way forward, Leenika says that they have signed an MoU with Google Arts and Culture for their GAC app to put together larger Chaupals in key states. “Our mission is to inculcate a new generation of artists and artisans by giving them inclusive avenues. We want to monetise, sustain, and most importantly, be a change agent,” says Leenika.

Medha Mukherjee worked for five years with the BNP Paribas Wealth Management team before she took the entrepreneurial plunge in 2015 to start Feministaa Media. She used to write anonymous articles for a blog and always wondered about the unspoken gender biases: why were women encouraged to work, but not too much. They were asked to study, but from an institute close by. She was curious and wrote to women who were professionally established, like Madhuri Bannerjee (Author and Scriptwriter, Hatestory2), Arundhati Bhattacharya (Chairperson, SBI), Bhavna Agarwal (CEO, NDTV Gadgets), and Prerana Langa (CEO, Yes Bank Foundation).

She asked these women questions on how much a woman should work, how do they find their creative space, how do they deal with family commitments on a heavy work week, and so on. She discovered that irrespective of the industry they worked in, women face similar pressures to juggle multiple roles. This is a major reason why they leave jobs as soon as they are promoted with more responsibility. “I am not even talking about having children. I feel much before that stage, women succumb to pressures created by notions around them,” she says.

The answers to these questions encouraged her to build Feministaa, to increase the woman workforce in India using AI and technology. She does this through videos, movies, graphics, articles on the platform, and even through events like ROAR (Rise of a Rebel). “Observing the attrition rates of women in the workforce, it’s disheartening to see the amount of talent that companies, and the experience that women lose out on,” says Medha.

Starting up, she faced several challenges like renting the right space, and getting interviews from celebrities. Her biggest challenge was to explain what mentoring actually meant to people, who misconstrued it as therapy, and also creating awareness about the good side of the much-vilified media. Medha says that her greatest strength is creating human connections. “I’m extremely good with people relationships and communication. My interviews with celebrities have been candid, as I have been able to build a good rapport with them.”

She says that creative spaces are the need of the hour, and competition is required for creativity to explode. “The startup space is booming. People are coming up with amazing creative solutions and ideas. The work culture is changing dynamically, where founders are becoming more involved with their teams,” she says. That being said, she adds that the acceptance for using technology over other solutions is still at an evolving phase in India.

Feministaa is based in Gurgaon, and has branches in Bengaluru and Mumbai. On their way forward, she says that they want to build India's only professional mentoring app for women with world-class AI technology. “AI is definitely the next big thing, as it will help us manage larger teams and projects,” she says.

Snehal grew up in Nashik, but never thought of it as a place where she could flourish. The big city dreams brought her to Mumbai seven years back and she started a career in design. In 2015, she hosted a painting party at her home, and created a page called Bombay Drawing Room (BDR) to create a buzz around the event. The event went viral. Soon she decided that it was time to take it outside her drawing room, and started hosting public painting parties. “I found my calling – to unleash the creative side of people by providing a platform where they could create art. Developing the culture of creativity has been my motto since then,” says Snehal.

While her corporate job meant good money, a swanky office and a brag-worthy identity, BDR allowed her to get in touch with her long-lost love of becoming an artist and teaching others. When she started, she was apprehensive about what model would suit the business. “Initially, I struggled with basics like logistics, inventory and recruitment. My challenges have evolved to more scaling up related ones like competition, reinventing the wheel for a pioneering service, how to help employees achieve their career goals, and so on,” she says.

From drawing rooms, they moved to weddings, parties and corporate activities, to even being part of the Kala Ghoda Festival. “The two-hour BDR sessions rejuvenate, creatively satisfy, aid self-discovery and facilitate social bonding. In long-term, they improve self -expression, build communities and aid rehabilitation,” says Snehal.

Their customers are mostly millennial women seeking creative outlet/exposure, knowledge, personal engagement and work-life-balance in a stressful and alienating city life. Initially, BDR chose workshop venues, but soon realised that people found it boring to come to dead spaces. “I was targeting millennials who would otherwise not go for an art show or paint. They went to bars, cafes, restaurants to hang out with friends.” One of their innovative strategies was to convert bars and cafes into cultural spaces by using them in off-peak hours, which proved to be a win-win.

On competition, she says, “Recently, small local and unorganised groups have come up, but BDR leads by a far margin. Our low overheads, revenue share model has enabled us to partner with 20 artists and 40 leading bars, giving us the agility to expand our footprint in the largest Indian cities.”

On her way forward, she says that she wants to make art affordable for all sections of society, from all financial backgrounds and ages. Snehal says that there is no specific support for startups in the creative space. “I believe if we have a combination of tech and creativity, it will develop a creatively sensitive society.”

To engage existing customers, BDR keeps creating new formats, and now have more than 100 creative formats to choose from. They are also art activity partners for brands like Taj, Bain & Co, Asian Paints, Cambridge International, Sony Pictures, Four Seasons, and so on. Today, BDR has moved from being a weekend fun activity to a movement that has served 11,000 people in 1,000 events till date. Bombay Drawing Room has received recognition from national media platforms. Snehal has also been selected for the British Council – Art and Culture Startup Bootcamp in Sri Lanka.

SheLeadsTech is a programme by Facebook to support women entrepreneurs in India by providing access to community, tools, resources, mentorship, and more. As part of the programme, they are able to meet other budding entrepreneurs and get access to programmes like FbStart, monthly Ask Me Anything (AMA) sessions, and so on. Snehal says that she spends heavily on social media marketing, so the programme was helpful.

“It helped me market better, and get access to a great network of passionate women. It’s inspiring and much needed when you feel like you’re climbing the mountain alone,” says Snehal.

Medha, who is always on the lookout for tech support, believes this is a relevant platform. Leenika hopes to collaborate with the SheLeadsTech team to put art out in more visible spaces.

If you’re a women entrepreneur looking to scale your business, click here to be a part of the Facebook SheLeadsTech Programme.