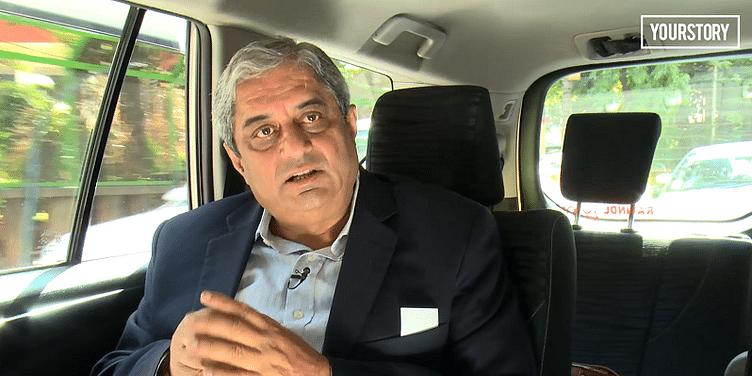 As the longest-serving head of any private bank, HDFC Bank Managing Director Aditya Puri is an example of how business leaders of corporate giants can compete with nimble-footed disruptors of the technology age and emerge winners.

In the corporate world, the disruption created by smaller companies and startups is often reminiscent of the oft-told Biblical story of David and Goliath, which talks about the triumph of the underdog over the giant. Indeed, much of the disruption caused by startups and relatively smaller players provide good reason for this comparison.

But there are always outliers. And HDFC Bank – India’s largest private sector bank – has stood out as the rare exception to this story, which is testament to the iconic, visionary, and agile leadership of its Managing Director Aditya Puri.

And it is this story that I seek to unravel as I await Aditya Puri – the longest-serving head of a private bank – at the Bengaluru airport so I can interview him on the car ride into the city. More than anything, I'm keen to ask the man – known as the Bachchan of Banking – on what it takes to be a banking giant that operates with the agility of a startup and stays ahead.

As he arrives through the airport gates, there’s a flurry of activity as HDFC employees and fans rush to greet him, some offering to carry his bag, others scrambling to welcome him with flowers.

True to form, the man – known for building the country’s best startup – has a kind word and a smile for everyone. He greets his employees by name and talks to them with a humility that is the hallmark of great leaders. In all this, there is not even the slightest hint of pride that one may otherwise expect from a banking industry veteran who has 40 years of experience in the sector.

And yet, when he answered my very first question, it becomes immediately apparent why Aditya Puri is such a venerable name in India and in the global financial industry – an icon credited with propelling HDFC Bank to become India’s most valuable bank in his 25 years at its helm.

I start by asking something on the lines of surviving and thriving in the age of disruption, and his response is swift, witty, and decisive.

“When young people like you ask me, ‘are you going to be a dinosaur?’ I say, ‘I’ll be damned if I worked for 25 years to start from scratch; that I’ve become a dinosaur. I’ll dinosaur you’.”

And that’s exactly what he set out to do in 2014, when he travelled to Silicon Valley to understand the hype over fintech and the major revolution unfolding in the financial services industry.

At the time, HDFC Bank was already India’s most valuable bank, recording quarterly profit growth of around 20-30 percent consecutively. With a market capitalisation of around $41 billion in 2014, HDFC was the only Indian bank to be named among the world’s 50 most valued banks that year, in a list compiled by Relbanks. Ranked in the 45th position, HDFC, by then, was already ahead of global behemoths like Standard Chartered and Credit Suisse in valuation.

But this was no cause for comfort for Aditya Puri, who was keen to see and hear first-hand from entrepreneurs in the Silicon Valley about the disruption they wanted to create in fintech.

Once in the Valley, Aditya Puri spent time with close to 20 entrepreneurs and at the end of these meetings, his greatest takeaway was this: nobody was talking about reinventing a bank; instead, they were talking about turning the bank into a service that you could plug into the bank.

“They all wanted to ride on top of the banking system. I came back and said this is nobody’s preserve. Why would I let somebody else eat my breakfast when I have the product, I have the knowledge, technology belongs to everyone, and I have a customer base,” he says.

That understanding was enough to give Aditya Puri the impetus to drive his leadership team to start work on HDFC Bank 2.0, one driven by collaboration with third-party players, not competition.

[WATCH] HDFC Bank Managing Director Aditya Puri talks about the importance of humility, the need to walk the talk, and be customer-focused

To enable this collaboration, they started with the technology, working on their application programme interface (APIs) base – code that allows different software programmes to communicate with each other.

“We went into the APIs to see whether we can on another platform close up our product… we also changed our technology from core banking, then we had the middleware base, and then we had the API base so that we could have collaborations,” he says.

With this, HDFC Bank moved from a pure-play banking experience to a financial experience. “Welcome to the new HDFC Bank. Two clicks either on your mobile or your laptop, or you can go to the branch. You can do banking and shopping,” Aditya Puri says.

Undeniably, the success of this strategy and the leadership team’s flawless execution of the bank’s digital transformation is reflected in the market-beating growth and returns that the bank has enjoyed since 2014.

“In the last two or three years, our cost to revenue has come down by 10 percent. I want to bring it down by another five percent,” Aditya Puri says, about the bank, which reported a 20.53 percent growth in net profit to Rs 21,078.14 crore during the financial year 2018-19.

Since 2014, HDFC Bank’s shares have outperformed the Sensex and the Nifty every year, with the bank’s shares nearly tripling in value from around Rs 860 in September 2014 to Rs 2393.90, its Friday, July 12 close. By comparison, the Sensex has risen 42 percent, and the Nifty banking sector index 89 percent.

Indian entrepreneurs applaud Digital India and here is what they expect from Modi 2.0

Disrupt or be disrupted

In entrepreneur and technologist Nandan Nilekani’s own words, the story of HDFC Bank is one of how “a giant bank can take on the nimblest of startups and become a market leader and pioneer… a lesson on how incumbents in various industries can respond to the digital disruption staring at them.”

Aditya Puri also points out to me that HDFC Bank – among the first in 1994 to receive an ‘in principle’ nod from the Reserve Bank of India to set up a bank as part of the liberalisation of the Indian banking industry – will not only survive in the age of disruption and the digital world, but also thrive, and “thrive better than anybody else.”

And thrive it has.

Aditya Puri, who returned to India in 1994  from Malaysia where he was the CEO of Citibank, has successfully steered his company to achieve what he set out to do: create a ‘world-class Indian bank.’

With a market capitalisation of $100 billion and an employee base of around 200,000 people, HDFC has constantly stood out for its consistent performance and high-value generation, not just among banking peers but also among all listed companies, according to a recent report by the RBI.

Still, when I press him on the competition posed by fintech players and startups, Puri counter-questions,

“Which part of my business do they threaten? All that they are doing is making a payment free and giving you cash back and not making money. This, hopefully, is the beginning for them. If this is the sole intention of their business then they’ve got a problem.”

Just cash? Not anymore for businesses in Digital India

To be clear, the success of an established banking behemoth like HDFC Bank in staying ahead of the digital disruption in different sectors is, by itself, a case study of how a giant operating in a sector written off as archaic can transform its operating model to ride the digital wave sweeping India and the world.

“Let me give you a simple understanding of what is happening in the world and how we have fit into that and why I say we will not only thrive, but we will more than thrive,” Aditya Puri says, explaining,

“When you look at the secular shift that's happened in telecommunications, computing, social mobility, artificial intelligence, what it has done is, it's enabled you to change your business model. Now, some people sat back and decided to ignore this. Others said we are going to change. And what they did do was use this change to fundamentally change their operating model to make it cheaper, more convenient as well as give a better product to the customer,” he says, referring to companies like Amazon, Google, and Apple.

The phenomenon, going forward, will be divided into two distinct operating models, says Puri, who is due to retire in October 2020, when his term ends.

“Two things will happen which should be understood: the race for people like Amazon and the others is to get the customers because they have the product, and for us, is to get the right product and operating system in place because we have the customers.”

And for Puri, it all boils down to one thing: customers.

“If you are in business, the customer is king. If you don’t have the customer, you will be out of business -- technology or no technology.”

In his long and illustrious career, during which he successfully steered HDFC Bank through the global financial crisis and the bad loans crisis in the country, Puri has focused on three essential pillars that have distinguished his leadership and cemented his success: being in touch with ground realities, being customer-focused, and leading by example.