WATCH: The week that was - from Xiaomi's success in India to startups going after the next 300M consumers 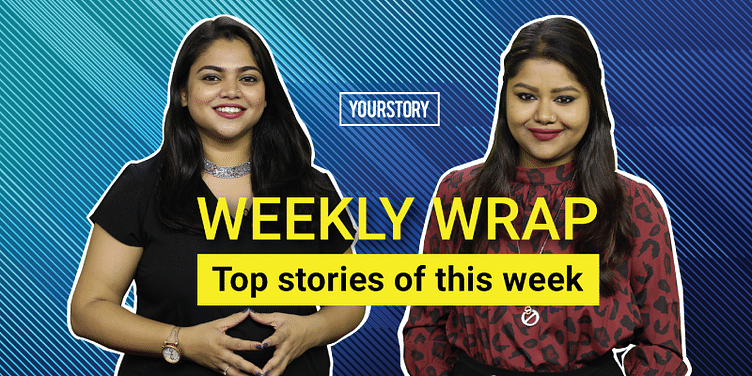 How did Xiaomi manage to capture the Indian smartphone market? How will Miko, India’s first companion robot, help parents keep their kids occupied? Read all this and more in our weekly wrap of stories.

We want to kick-start this weekend with a story that makes you believe about in the power of content.

Content writing and creation is the need of the hour to help secure business connections and market a product, and is vital in effectively branding oneself on the world wide web. Pepper started with these very parameters in mind. The Mumbai-based startup was co-founded in November 2017 by BITS Pilani batchmates Anirudh Singla (20), Rishabh Shekhar (21), and Rishank Pandey (21).

A content creation platform, it builds a community of voice, video, and vernacular subject matter.

Capitalising on the need for content creators who can thrive in an online marketplace where their contributions are not only recognised, but also monetised, the idea was to standardise this disorganised sector.

“We are building India’s largest content marketplace and plan to take this to a global scale. We want to make content creation, right from strategy to execution, accessible through an on-demand virtual workforce at any scale, vertical, and language. We are building the future of work for content in India,” Anirudh claims.

One common problem almost all startup founders face is hiring the right team. It isn’t easy to find the right talent that fits the company's culture and can help scale, at the right time. But Vanishri Deshpande has been solving for this “founder's block” with ConnectEcho, her “startup for startups”.

Vani started her journey as a leadership recruiter in 2004, and in 2011 joined Flipkart’s talent acquisition team.  “We needed a lot of audacity to pitch to top talent then, from companies like Bing, eBay, Unilever, Dell, and AOL among others. No one was ready to join an online ecommerce company, and the word ‘startup’ was akin to ‘risk’,” says Vani, describing her early days at Flipkart.

It’s important to note that by 2011, the poster boy of Indian startups had already raised more than $30 million in equity funding, attracting the likes of Tiger Global and Accel.

“I remember that we literally had one-liners as job descriptions: someone to head analytics, someone for digital marketing and analytics, or the private label function… Startup recruiters were also going through a steep learning curve. It took a while to convince talent that we were building a big company and their career trajectory would grow to a whole new level, and deadlines given were as short as a week. Following that were several ‘No’s’ to get one ‘Yes’ from the founders,” Vani recalls.

Almost a decade after she started out, the founder feels that while there is no dearth of talent, and the narrative around Indian startups may have evolved, storytelling and the semantics of hiring haven’t kept pace in the recruitment industry.

In this week’s Techie Tuesday column, we featured HealtifyMe’s Sachin Shenoy, who says he is living his ultimate childhood dream.  “We have an AI assistant, Ria, that holds conversations on our app. I can say it is a complete circle of sorts; when I was 14 years old, the BBC used to air Thinking Machines, which revolved around scientists building machines that could converse and interact with humans. It was what fascinated and interested me and, today, with Ria, we are doing the same thing,” the entrepreneur says.  Having worked with the likes of HCL Technologies and Google, healthcare was something Sachin believed needed disruption with technology and AI.

Hailing from Kozhikode, Sachin, a self-proclaimed rebel at school, saw his love for technology first take the shape of interest in electronics. “I liked tinkering with circuits and machines, and my love for everything technology-related intensified with the BBC show,” he recalls.

Speaking of great technology, we all know by now how Xiaomi is disrupting the Indian smartphone market. Since entering the market, the Chinese smartphone maker has become India’s No 1 smartphone brand within a short span of three years, defeating global giants like Samsung and other Chinese phone companies like Vivo and Oppo.

The phenomenal success of Xiaomi, as dissected by its Managing Director for India, Manu Kumar Jain, has a lot to do with great products that come at an honest price, the home market strategy in India, and an empowered local team. Manu, with his charisma and entrepreneurial spirit, was the man who pulled this together. In the wide-ranging conversation for this episode of GGV Capital's podcast, Evolving for the Next Billion, he discussed the biggest success factor of Xiaomi in India, his advice for foreign brands that want to make inroads into the country, and what it's like to work with Lei Jun.

We then featured Navana Tech, a startup that brings technology to the rural masses.

By the early 2000s, with many households having computers, a majority of Indians had learnt the basic operations of a computer. As technology partnered with convenience, mobile phones and free data reached our fingertips, and so did a plethora of information and knowledge. It is convenient to imagine that digital operations are child’s play in today’s world, considering how acquainted most of us have become with the internet and digital devices over the last decade and a half.

But there exists a large part of India that is introduced to the digital ecosystem with little or no prior hands-on experience with smartphones, data, and the like. It is to solve this problem for the next billion users of India, especially the illiterate sections of the population in semi-urban and rural areas, that Raoul Nanavati (31) along with his brother, Jai Nanavati (28), started Navana Tech in Bengaluru in 2018.

Mumbai-based startup Emotix, on the other hand—featured as part of our Children’s Day coverage—is poised to help children grow up tech-free with the help of Miko, India’s first companion robot.

The growing concern for all modern parents is that their child spends way too much time on the phone, tablet, and other screens. Increasingly, meal-time lullabies are replaced by YouTube videos and playground visits are substituted with online games.

A report by the World Health Organisation states that children below five years of age should not get more than one hour of screen time every day. But, a growing conundrum for parents, especially working ones, is – how to keep the children occupied for the rest of the day? Three friends and alumni of IIT Bombay, Sneh Vaswani, Prashant Iyenger, and Chintan Rajkar, found this challenge attractive enough to solve.

WATCH: The week that was - from Udaan’s journey to becoming a unicorn to Freshworks engineer wh...