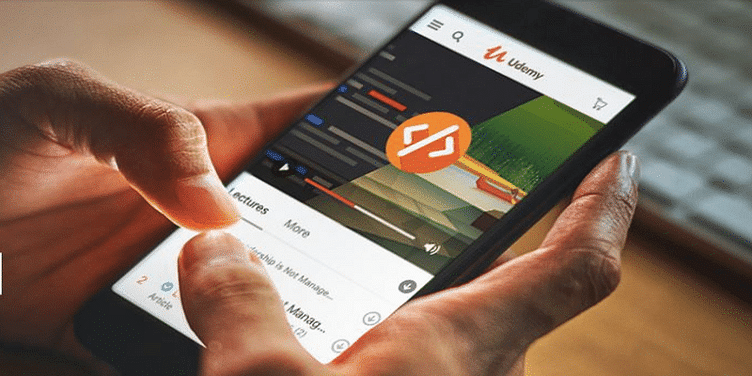 The Udemy app has recorded over 10 million installs on Google Play Store and is one of the top-rated apps in the education category.

The other non-gaming apps in the top 10 are Google One, LivU, Azar, and Truecaller. Gaming apps continue to dominate spends in India, with PUBG Mobile leading the way.

The platform counts over 40 million students from across the globe. On the Udemy app, users can choose from more than 130,000 learning courses in over 60 languages.

These courses range from programming languages like Java and Python to even personal skill development classes such as writing, design, marketing, and more. These courses are taught by more than 50,000 expert instructors.

The Udemy app has recorded over 10 million installs on Play Store. Users can even download lessons and consume them offline.

Udemy's rise mirrors the growth of the online learning and skilling segment in India. Similar platforms like Udacity, upGrad, Coursera, Simplilearn, and more are also vying for attention.

India leads the world in mobile app installs in 2019, TikTok most downloaded

At a macro-level, the growth in India's overall app consumption has powered all sectors. In May 2019, the country became the top market for app installs, ahead of even the US.

India also witnessed the most number of new installs on Google Play Store worldwide, more than 29 percent compared to 2018, according to Sensor Tower data. It is one of the fastest-growing app economies, accounting for 31 percent (or 466.8 million) of unique installs globally.

Social, communication, and video-streaming apps ruled the roost, with TikTok being India's fastest-growing app in 2019.

This too was India's doing.

"It might surprise some to know that Subway Surfers was the most downloaded app game of the decade, driven by its strong adoption in India, which accounted for over 15 percent of its all-time downloads," App Annie stated in a report.