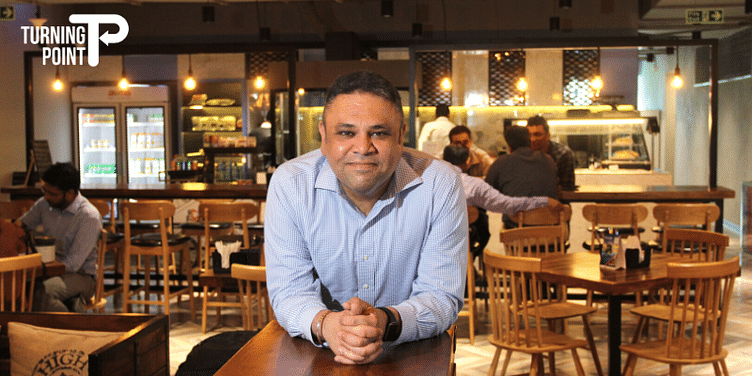 Turning Point is a series of short articles that focusses on the moment when an entrepreneur hit upon their winning idea. Today, we look at New Delhi-based co-working startup Awfis.

The idea of starting ﻿Awfis﻿ had been on Amit Ramani’s mind since his consulting days in the USA when he was working with Bank of America. On returning to India, he saw that SMEs and startups were constantly faced with the challenge of having decent infrastructure at cost efficient prices.

His goal was to start a business to provide new-age and technology-enabled workspaces that offer a superior alternative to owning conventional offices.

Speaking about starting up a co-working space, Amit Ramani, Founder and CEO of Awfis, tells YourStory,

“We felt that commercial real estate operated in an archaic fashion with spaces being offered by developers and conventional business centers with long-term commitment and upfront deposits. This resulted in SMEs and startups having to settle for office spaces that are sub-standard and at inaccessible locations.”

Amit says the Indian commercial real estate market was fragmented and he saw an opportunity to partner with the landlords in a win-win situation that works well for the landlord, for Awfis, and also the end consumer.

He says, “With my experience in strategic planning, design management, facility planning, and workplace and business process improvement, coupled with some deep understanding of the Indian real estate ecosystem, I was convinced that with the right team, I could turn my idea into a successful business venture.”

Prior to starting Awfis, Amit was the COO of Nelson Global, a top global design firm, where he led the company across 37 locations and 600 people. With over 15 years of experience in areas of master planning, strategic planning and design, the thesis behind Awfis came off as a natural progression to him.

The solution was about providing ready-to-use, plug-and-play workspaces, which can be booked through a mobile app. The objective is to make it convenient to use an office or a work desk on ‘just-in-time’ basis without the complications of a fixed tenure or security deposit. The comprehensive solution claims to be providing everything that an office user will require, at extremely competitive costs.

Over a period, the CEO says, the startup has evolved with the market and has also started catering to the B2B side of the business by creating customised and fully-integrated independent workspaces for large corporates and MNCs.

Awfis has become profitable at entity level from November 2018, and is targeting to launch a public issue in 2022.

In August 2018, it raised $20 million in its Series C round from Sequoia India, The Three Sisters Institutional Office and Innoven Capital.

The Series D funding for Awfis came in August 2019. It raised $30 million from marquee investor ChrysCapital, while there was also participation from its existing investors Sequoia India and The Three Sisters Institutional Office.