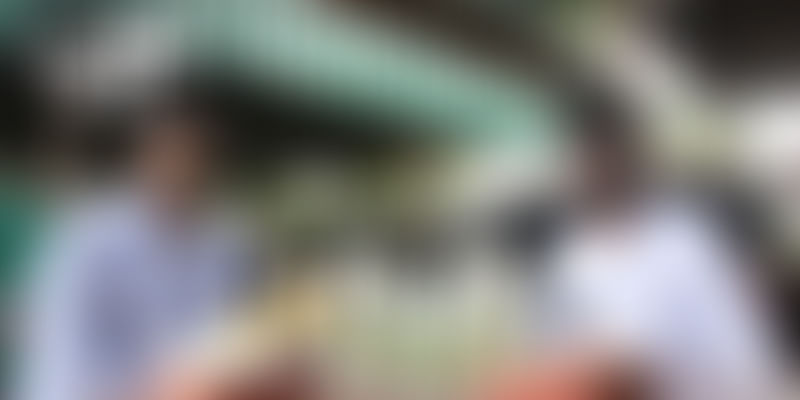 The Turning Point is a series of short articles that focuses on the moment when an entrepreneur hit upon their winning idea. Today, we look at Ranchi-based dairy startup Puresh Daily, which delivers farm-fresh milk and dairy products to customers’ doorsteps.

It was a moment straight out of Shahrukh Khan-starrer Swades.

Manish Piyush, an IIM graduate, who had worked in 14 countries was visiting his hometown Ranchi when he realised the problem: the lack of focus on non-metro towns, especially in his state, Jharkhand.

“People want to solve urban problems, but not many are solving some basic problems in India,” Manish says.

Manish and Aditya did their schooling in Ranchi, and went on to study at Birla Institute of Technology, Mesra (Ranchi). Later, they left their hometown to pursue higher studies.

After completing his engineering course, Manish landed a job in a marketing role with the Tata Group in Jharkhand. He worked for a couple of years, decided to do an MBA at IIM-Indore, and then flew abroad to take up a global role at the Tata Group.

Manish says he worked in 14 countries from 2009 to 2017. He returned to India in 2017 as the General Manager of Tata Motors in Mumbai. During this time, he learnt that his home state was organising an event called Momentum Jharkhand, on business possibilities in the state.

During the conference, “a chai-sutta break outside the conference” with his friends became a turning point for Manish. He saw a few local tribals from Jharkhand and felt that “conferences like these are just for two days, but Jharkhand stays the same as the best minds move out”.

“The brain drain problem in India might have been solved, but not for states like Jharkhand,” he says. This prompted Manish to call his childhood friend Aditya to ask if he wanted to come back to their hometown and do something together.

“With a fat salary and wife and kids, it was a tough call, but it did not take us long,” Manish says. Both resigned from their respective jobs in 2017 to come back to Ranchi.

Interestingly, Manish and Aditya did not foray into the milk business at first. While they were figuring out what to do, they knew technology would be core to any business, and so, in their 40s, they learnt coding, and sold software for living.

“Selling and developing software was a tool to understand different businesses,” Manish says.

The land of milk and honey?

The eureka moment was when the duo got a project to develop software for a milk processing company in Jharkhand. They were shocked to see “the kind of milk we all were drinking”.

“We realised that the type of processes and chemicals that go into the treatment of milk are really scary,” Manish recalls. The idea of starting a milk business took shape then and the duo also bought five cows and lived like milkmen for a few months To try and understand the dairy business.

Manish says he never knew they would foray into a dairy business. “It all started with an extremely basic problem at home: access to good quality milk,” he says.

Recalling the time when he lived abroad, Manish says access to milk with Omega 3, Vitamin D, etc., was easy, unlike in India. “In Ranchi, I was looking for good quality milk, and the brands available did not provide me the assurance that the milk was adulteration-free and hygienically processed,” he says.

He highlights that India’s ancient texts reveal that in olden times cows would eat herbs and produce milk with herb and healing properties.

This Gurugram-based dairy startup has new ways to fight adulteration

Manish and Aditya experimented on these lines with their cows, and “the results were wonderful”. “The protein content in milk in popular milk brands were 2.9 percent, we got 3.6-4 percent per glass,” he claims. “This was our pilot run.”

This gave birth to Puresh Daily in January 2019 with initial delivery service of milk to residential societies in Ranchi. The startup also sells chemical-free sweets, cottage cheese, cow ghee, curd, and vegetables and fruits grown on their farm.

The duo put in seed capital of Rs 10-15 lakh, raised from family and friends.

To ensure nutritious milk, Puresh Daily grows its own vegetables and herbs on its farm to feed its cows. At present, Puresh has about 80-100 cows, and a team of 40 people.

Puresh achieved breakeven within the first six months of operations, and the profits have been recirculated in the company.

“Within one year, we have touched revenues of Rs 1.2 crore,” he says. The company delivers milk to more than 1,500 customers a day and has its own tech and delivery system to deliver orders.

Manish says the company has put an asset-light model in place and tells that it hires delivery boys who use their own bike, and “we give them our patented bags, which does not need any special delivery vehicle”.

As of today, Puresh has customers across Ranchi, Bokaro, Ramgarh, Jamshedpur, and is soon going to launch in Patna.