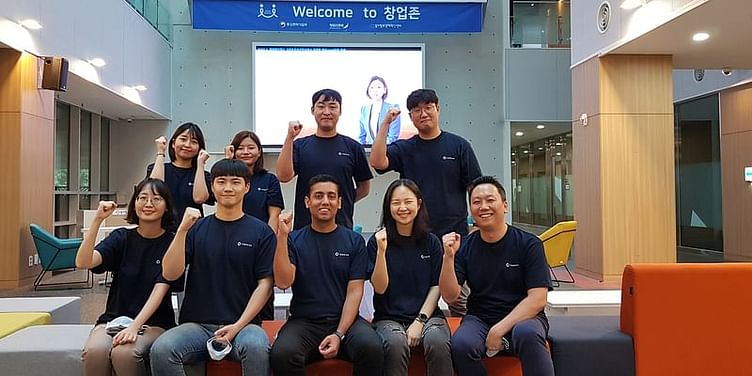 South Korea-headquartered edtech startup TagHive offers AI-powered, personalised in-school and at-home learning solutions for students. Their product is being used in 450 schools in Korea, and is in pilots with 50 schools in India.

Pankaj Agarwal has always believed education is a great leveller.

Hailing from a small town, he didn’t have access to the best schools. But his drive and determination to learn took him to IIT-Kanpur and then Harvard for an MBA. Since then, he has worked with the likes of Samsung Electronics in South Korea.

But he chose to return to education in 2017 by launching edtech startup ﻿TagHive﻿. Headquartered in South Korea, TagHive spun off from Samsung’s C-lab incubator programme and has built an interactive classroom solution to positively impact the lives of children studying in schools like those in his village.

TagHive’s flagship product is Class Saathi, a solution for learning and assessments in classroom and at home. The first-of-its-kind (patent pending) clicker-based solution works with mobile phones, making technology accessible and affordable to schools in rural India.

The Class Saathi at-home version also offers an AI-powered personalised learning experience to students. At present, it offers math and science content for students from Class 6 to Class 10.

“We launched our classroom solution (under the ClassKey brand) in the South Korean market and received a fantastic response. We were able to onboard 450 schools across the country in less than a year. Our investors and the team were convinced that India would be a great potential market and we launched operations here in 2019," Pankaj says.

“The launch began with a pilot test with more than 1,000 students in 20 schools in Uttar Pradesh, and exhibited great results. We saw a marked increase in the learning outcomes and attendance of students within just a few weeks,” he adds.

Checkmate: How these electronics engineers are marrying tech and chess to revolutionise the board game industry

The TagHive team was also invited to implement Class Saathi in 13 government schools in Madhya Pradesh.

The founder believes that the “effectiveness, affordability, and overwhelming acceptance” of our solution urged the MP government to issue a letter of intent to scale Class Saathi to more than 2,000 schools across all 52 districts of the state. This partnership is likely to impact more than 1,00,000 students and 4,000 teachers.

“Our first challenge was putting together a team that believed in our vision and had the same passion to make an impact. As a company, we always prioritised intent and attitude over knowledge and skills while hiring. The challenge was launching in India since we are physically based out of South Korea. It wasn’t easy to set up a team remotely but we now have a small, strong team and are looking at hiring more people as we grow,” Pankaj says.

The initial idea was to create electronic tags that made various every day experiences such as playing, reading, shopping, cooking, eating, travelling, and others more convenient. That led to the name TagHive, meaning hive of different tags.

This Y Combinator startup aims to be the Zoom alternative for all Indian startups, SMEs

Moving away from toys

“We started with toys -educational toys. We made some revenue by forging meaningful partnerships with key toy companies. Very soon, we found that the toy market was very conservative and the growth of the toy industry was going to decline. Hence, we ‘pivoted’ to the education space around 20 months ago. Our next mission was/is to build tags for education,” Pankaj says.

The Eureka moment was when he was building classroom solutions in South Korea and the Korean government asked them to build something for the Indian market.

Pankaj was given a chance within Samsung to hire somebody as a Co-founder to pursue this idea and build a business. He roped in Danny Dongwook Nam, and the duo agreed to build a team in India and Korea. TagHive is now a team of 10.

Pankaj says they found that India has over 1.5 million schools. A vast majority of these schools need to become smart, but cannot because of their limited technological infrastructure. TagHive’s solution was ideally placed to be that bridge for government schools at an extremely affordable price point.

“I think the Korean government approaching us to contribute towards the Indian education market and our making the Indian government schools smart with just one bag of clickers was huge," he says.

“Another recent Eureka moment was the set of recommendations in the New Education Policy 2020. Our philosophy with Class Saathi is aligned with recommendations made in the 60-page policy document. Now, we aim to be a powerful enabler in the implementation of those recommendations,” Pankaj explains.

The business and more

The team made high revenues (undisclosed) when operating in the toy space.

In late 2018, the team moved into the edtech space. The team claims to be boarding two to three new Korean schools on the platform every two months.

The team makes revenue by selling the hardware to schools, trust, and foundations. They also make money from their software. The app is free, but TagHive has a number of paid events where they charge very minimal fees for participation.

“Another potential (but yet to be tested) revenue driver is from selling analytics to schools that want to know more about their students. Going forward, we also plan to form an AI engine that will be modelled in a way that other edtech companies in India can benefit from by making their solutions smart through our APIs or the black boxes of our AI engines,” Pankaj says.

Amidst COVID-19, the TagHive team built a B2C product — the At-Home Learning app, which has more than 1,00,000 downloads and has received multiple rave reviews.

TagHive is at present being used in 450 schools in South Korea, and is in pilots with 50 schools in UP and MP. The team has also partnered with HCL Foundation for their Happy Schools initiative.

“We have MCQ for math and science, catering to students from Class VI to X. Each question is mapped to a skill and difficulty level. The app recommends quiz sets based on the learning level of each student. Now that we have tied up with the MP government, we hope to reach more than 2,000 schools in India very soon,” Pankaj says.

TagHive is looking forward to partner with 3,000 schools in South Korea and get more than a million downloads of the At-Home Learning app by the end of 2021.

“We are also expecting to expand in three more states in India and have our presence in 10,000 schools in India and South Korea combined,” says Pankaj.

The K-12 segment is fast growing in India. Apart from unicorns and giants like BYJU’S, the K-12 segment is growing with players like - ﻿Lido Learning﻿, Tinker Coders, and more recently ﻿Kyt﻿, which is a part of Surge’s fourth cohort. There also is Uable founded by Vedantu founder - Saurabh Saxena.