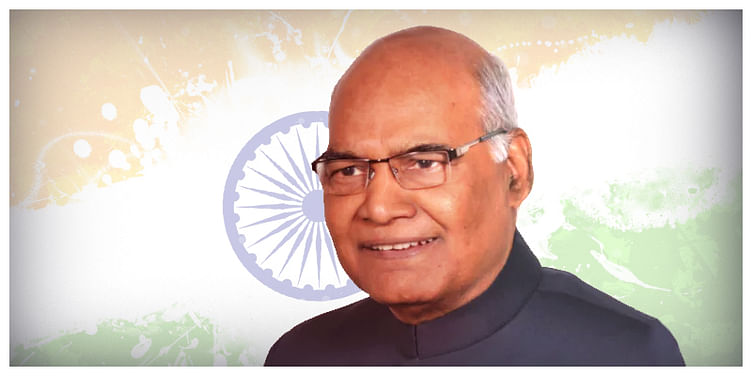 President Ram Nath Kovind said the call for Aatmanirbhar Bharat Mission was for converting a crisis into an opportunity and is in line for shaping a new India by 2022.

Ahead of the Republic Day, President Ram Nath Kovind asserted that the country's armed forces are "adequately mobilised" in a "well-coordinated" move to thwart any attempt to undermine national security, and recalled how its valiant soldiers foiled the "expansionist" plans by China in Ladakh last year.

"Our national interest will be protected at all costs," the President declared in his address to the nation, during which he also said every Indian saluted the farmers and sought to allay their fears over the three contentious farm laws.

Kovind's remarks came amid the nearly nine-month-long military standoff with China in eastern Ladakh and the deadlock between the Centre and the farmer unions over the farm laws enacted in September.

"The path of reform at the initial stages may cause misapprehensions, but the government is singularly devoted to the farmers' welfare," he said, as the protests by the farmer unions, demanding the repeal of the three laws continues at border points in Delhi.

On the country's efforts to fight COVID-19, the President said an effective response to the pandemic would not have been possible without the Constitutional value of 'Fraternity' among the people of the country. He also took pride in the fact that India was called as "pharmacy of the world" for supplying medicines to several countries to alleviate the sufferings across the globe.

He felt that after about a year of this "unforeseen ordeal," India today stands "not despondent but confident."

Also, he said the slowdown has turned out to be transitory as the economy has regained its dynamism.

Kovind urged people to utilise the "lifeline" provided by the COVID-19 vaccine and get inoculated as per guidelines. "Your health opens the way for your advancement."

Paying tributes to the 20 Indian soldiers who laid down their lives at Galwan valley in eastern Ladakh last June during clashes with the Chinese troops, the President said the past year "was a time of adversity, and it came from many fronts."

"We faced an expansionist move on our borders, but our valiant soldiers foiled it. To achieve this objective, 20 of them had to lay down their lives."

Kovind said the nation shall remain grateful to those brave soldiers.

"Though we reiterate our commitment to peace, our defence forces — Army, Air Force, and Navy — are adequately mobilised in a well-coordinated move to thwart any attempt to undermine our security. Our national interest will be protected at all costs. We have also ensured a widespread understanding in the international community of India's firm and principled stand," the President said.

He said adversity often plays the role of a great teacher and makes people stronger and more confident. With that confidence, India has taken great strides in several sectors.

"Economic reforms have continued apace and have been supplemented by long-pending reforms in the areas of labour and agriculture through legislation," he added.

Paying tributes to the farmers, the President said every Indian salute our farmers who have made our vast and populous country self-reliant in food grains and dairy products.

He said that despite adversities of nature, numerous other challenges, and the COVID-19 pandemic, the farmers sustained the agricultural production.

"A grateful nation is fully committed to the welfare of our farmers."

The President said like hardworking farmers ensure food security for the country, the brave soldiers of the armed forces ensure the security of our national boundaries amid severest conditions.

"From the freezing cold at Siachen and Galwan valley in Ladakh with temperatures as low as minus 50 to 60 degree Celsius, to the scorching heat in Jaisalmer with temperatures as high as 50 degree Celsius — on land, in the skies, and at the vast coastal areas — our warriors are vigilant every moment. Every citizen feels proud about the bravery, patriotism, and the spirit of sacrifice among our soldiers," he said.

He also spoke about the scientist community, saying by their contribution to food security, national security, protection against disease, and disasters, and to different areas of development, they have strengthened the national endeavours.

"From space to the farms, from educational institutions to hospitals, the community of scientists has enriched our life and work. Our scientists have been working day and night for decoding the coronavirus, and they have succeeded in developing the vaccine in record time. With this accomplishment, our scientists have added a glorious chapter of contribution to the well-being of humanity."

He said that the scientists, along with doctors, administrators, and people from other walks of life, have made a major contribution in containing the virus and keeping the fatality rate lower in our country, compared to that in developed countries.

"The net outcome of all these efforts is before us."

The President said a self-reliant India has manufactured its own vaccine for COVID-19 and is now undertaking a mass vaccination drive, which will be the largest exercise of its kind in history.

He said the administration and health services are working with full readiness to make this exercise a success.

"I am sure that this love for humanity and the spirit of sacrifice will take us to greater heights. Let us look at 2020 as a year of learning."

Kovind also said India is moving ahead, and taking its rightful place in the world.

"During recent years, its arc of influence has been expanding and encompassing the larger part of the world. The manner in which India got the overwhelming support of the international community for its entry as a non-permanent member in the UN Security Council this year is indicative of that influence."

He said the engagement with world leaders has enhanced manifold and India, with its vibrant democracy has rightfully earned its respect as a responsible and trustworthy nation.

He said the call of Atmanirbhar Bharat Abhiyan or self-reliant India Mission, given by Prime Minister Narendra Modi, was for converting a crisis into an opportunity and is in line with the aspiration to shape a new India by the year 2022 when our country turns 75.

"This will be a significant milestone in the journey of the nation as we are determined to achieve major goals: from providing pucca houses with basic facilities for every family to doubling the income of farmers. To build an inclusive society of new India, we are giving special emphasis on education, health, nutrition, upliftment of the underprivileged, and welfare of women," he added.

Recalling the thoughts of Mahatma Gandhi for making all efforts to wipe tears from every eye, the President asked people to remember the constitutional mantras — Justice, Liberty, Equality, and Fraternity — and added that equality is the watchword for the great project of the Republic.

Social equality warrants dignity for each one of us, villagers, women, weaker sections of our society, namely, Scheduled Castes and Scheduled Tribes, Divyang-jan, and the elderly people. Economic equality entails equal opportunity for all and handholding for the downtrodden.