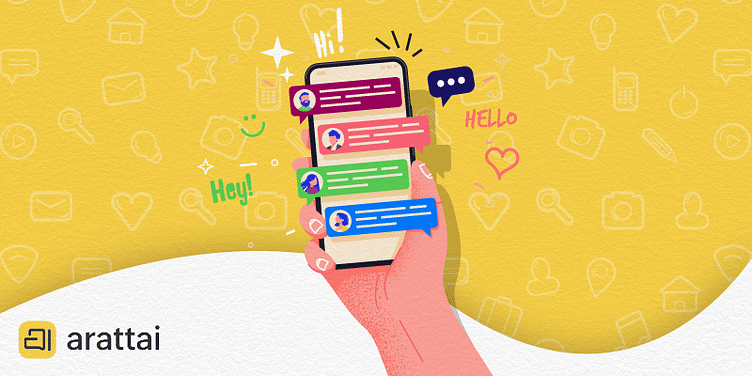 Homegrown SaaS unicorn Zoho soft-launched Arattai in the wake of outrage against WhatsApp’s new privacy policy. The app looks adequate and secure, but can it become a potent force in instant messaging?

Everyone loves a good challenger — in sports, politics, business, and so on.

﻿Zoho﻿, a renowned global name in the enterprise software space, is now gunning to be a WhatsApp challenger with its cloud messaging app Arattai.

The homegrown SaaS unicorn had merely been testing its new B2C product with a closed group of people, primarily Zoho employees, starting late-2020.

“This is a friends-and-family trial release. We will do a formal launch in a few weeks,” Founder-CEO Sridhar Vembu had posted on Twitter in early January.

However, due to the recent turn of events in the instant messaging world — WhatsApp’s privacy policy update and the subsequent exodus of users to other apps like Telegram, Signal, etc. — Arattai has picked up significant buzz, and crossed 50,000 downloads on Google Play Store even before its formal launch.

Now, what is Arattai? And does it deserve your attention?

The app derives its name from the Tamil word for ‘chit-chat’, and claims to be a safe and secure messaging platform with stringent data privacy clauses.

Arattai also ticks the ‘Made in India’ and ‘Aatmanirbhar Bharat’ boxes, and has attracted early adopters who are looking to move away from WhatsApp.

Zoho believes Arattai will be much more than just a messaging app, and can become “core to users’ daily lives” because of the upcoming utility features.

“You will see voice and video capabilities [in Arattai], which have taken about eight to 10 years of R&D that went into various products we’ve built…. Arattai itself comes from Cliq, which is our enterprise messaging platform. We are repurposing a lot of the technology towards a faster scale consumer-class product.”

On the surface, Arattai is a lot like WhatsApp or Telegram.

It offers text and voice messages, individual chats, group chats (for up to 1,000 users), voice and video calls (for up to six people), sharing of files, documents, photos, videos, and location, and Telegram-like Secret Chats.

There is a disappearing messages feature, which you can turn on for every contact. Users can also create a passcode lock for an extra layer of security.

Arattai also offers a Twitter-like ‘Mentions’ tab, where users can track all chats/conversations they have been tagged in on the various groups they are using. Plus, there is a Night Mode and six colour themes to choose from.

In the upcoming upgrades, Arattai is slated to roll out end-to-end encryption — that is fast becoming a deal-breaker in messaging apps — a digital locker, cloud storage, in-app games, payment linkages, and other add-on features.

As per its privacy policy, Arattai could ask users to provide certain personal information which may include, but is not limited to:

Zoho, however, claims that Arattai will not be sharing data with third parties without the explicit consent of its users.

The purpose of collecting data is to provide a better service and customer support, claims the company. All user data is stored in servers located within India.

Arattai will also give users the option to “correct, update or remove any personal information” either by accessing their account or by contacting customer support. “We respond to all enquiries within 30 days,” Zoho states on the website.

Arattai also promises to be “free for a life-time” — from ads or subscriptions.

[App Fridays] With Notebook, Zoho is taking on incumbents Evernote and OneNote fair and square

Verdict: Good alternative, but can it sustain?

Even before a formal launch, Arattai can possibly call itself a complete and adequate messaging app. It’s fast, intuitive, user-friendly, and comes with a significantly better interface than Signal or Telegram — apps that gained the most due to the mass outrage against WhatsApp.

Voice calls on Arattai are smooth with high quality audio; link previews look better than on WhatsApp or Telegram; starred messages and pinned chats are easily accessible; the dark mode looks sleek and inviting; other in-app personalisations (that can be accessed via Settings) are nifty add-ons.

On the surface, Arattai serves all your communication needs. There’s no reason why you cannot make the move from WhatsApp.

But WhatsApp’s success lies in its massive numbers — two billion users worldwide, with 400 million in India — and the bustling networks and communities it has created over time. We used Arattai for about a week, and found only two contacts on the app. (Rest, you would have to ‘invite’.)

Yes, the app is relatively unknown beyond the tech circuit, but can ‘homegrown’ and ‘secure’ be enough value propositions for a switch?

Can Arattai, in the near future, move a chunk of your contact list to its platform? Or will it remain a niche messenger for only the privacy-conscious junta?

Also, over the years, WhatsApp has gone beyond communication. It has payments, shopping, customer support for business users, and so on.

Even though Zoho has announced that Arattai will be more than a messaging app, only time will tell if it can compete with a category-creating success and emulate the mass reach that WhatsApp enjoys. Given the app store numbers of this week, WhatsApp is back to being India’s most downloaded messenger.

In Sridhar’s words, though, “We have a lot more in store. Stay tuned!”