OnePlus 9 series to be unveiled tomorrow: All you need to know 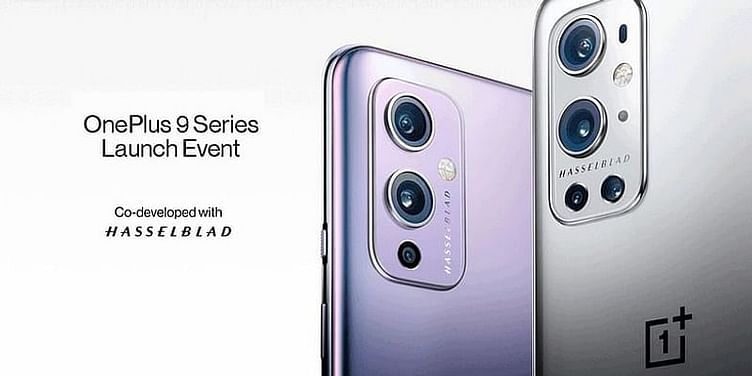 OnePlus fans will be able to watch the release on the company website and the company’s YouTube channel. Here's what we know so far.

Chinese smartphone maker OnePlus is all set to unveil its latest range of smartphones tomorrow. The two new phones — OnePlus 9 and OnePlus 9 Pro — will be taking the fight forward to the likes of ﻿Google﻿Pixels and Samsung Galaxy devices.

After a rather slow 2020, OnePlus is launching its flagship range almost a month earlier than its usual launch cycle. This strategy —already seen being used by Samsung for its new S21 series of devices — will also give OnePlus’ new devices more shelf time before the mid-year devices break cover.

Let’s take a look at what we know so far about OnePlus’s upcoming flagships:

The Swedish brand Hasselblad is a big name in the world of photography. After all, it was NASA’s choice of camera for capturing humanity’s first steps on the moon.

As part of a three-year deal, OnePlus devices will be seen with Hasselblad's imaging processing software, which will give mobile photographers more control over their photos.

The latest batch of devices will bear a custom 48MP Sony IMX789 image sensor, backed by Hasselblad software, which is expected to support video capture up to 4K at 120 fps and 8K at 30 fps.

Demystified: The man who bought NFT art for $69.3 million is a Tamil immigrant Vignesh Sundaresan

Another spec confirmed by the company is the ultrawide lens — Sony’s IMX766 sensor — a 50MP lens. OnePlus’ free-form lens is said to reduce distortion from 20 percent to one percent. OnePlus CEO Pete Lau even teased pictures on Twitter, showing off the capabilities of the lens.

Ultra-wide photography literally broadens your horizons. Shouldn’t it also keep them true? On the left, a shot taken with a conventional ultra-wide. On the right, the same (and yet totally different) photo taken with the #OnePlus9Series, free of distortion. pic.twitter.com/jbtWae2faP

In fact, the phones will be shod with a 2MP depth sensor to add to the numbers. Besides, the OnePlus 9 Pro will also get a fourth lens, details on which are scarce now. The front camera in both devices is expected to be a 16MP shooter.

Heart of the matter

The new OnePlus 9 and OnePlus 9 Pro are expected to be powered by Qualcomm’s latest 5nm Snapdragon 888 chipset. Both the phones will possibly retain the company’s strategy of offering two storage options — one with 8GB RAM and 128GB of onboard storage, and the other a 12GB RAM and 256GB of ROM.

OnePlus will use the new LTPO type of AMOLED displays for the new devices. This will allow the company to offer a variable refresh rate, ranging from 1 Hz to 120 Hz.

While the company has announced that the phones shipping to mainland China will be loaded with ﻿Oppo﻿ColorOS, the global units will continue to flaunt OxygenOS based on Android 11.

Both the devices will be powered by a 4,500 mAh battery with support for 65-watt fast charging. Several new reports suggest that the top-end One Plus 9 Pro will also support a 50-watt wireless charging. The company will also be fitting the phones with a five-layer cooling system.