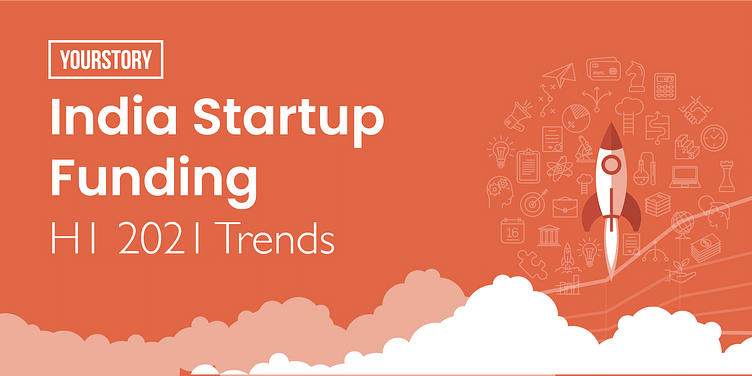 Indian startup funding in the first six months of the year (H1 2021) touched $10.1 billion, already exceeding the $9.94 billion raised in the whole of last year.

This, thanks to growing investor confidence in a more mature Indian startup ecosystem that is seeing an increase in the number of seasoned second-time entrepreneurs and a surge in new unicorn additions amidst a rise in more global innovations and solutions being built.

The H1 2021 startup funding amount of $10.1 billion was raised across 543 deals from around 1020 active investors in the ecosystem. That’s more than double the $4.85 billion raised in H1 2020, while the number of deals rose 28 percent from 424 seen in the comparable period, YourStory Research shows.

“One major factor (for the growth) in my opinion is the emergence of startups founded by second-time entrepreneurs. These founders are already experienced and know how to scale-up and this is exactly the reason why the ticket-size for early-stage funding is getting larger,” says Anuj Golecha, Co-Founder, Venture Catalysts, while referring to the increase in capital infusion into early-stage startups and the shorter timeframe taken to become a unicorn by startups founded by serial entrepreneurs, such as Kunal Shah-founded Cred.

Fintech startup Cred, which was launched in late 2018, was among the 15 startups that entered the unicorn club, while edtech major BYJU’S, which turned decacorn last year, saw its valuation increase to over $16.5 billion to become the most valued startup in the Indian startup ecosystem. With this BYJU’S valuation is nearly that of Flipkart’s before it was acquired by Walmart in 2018 and has also outpaced that of Paytm ($16 billion).

As the Indian startup ecosystem gains more maturity,  it is seeing a lot more money coming in from family offices, entrepreneurs, and startup folks who have done well, says Sajith Pai, Director, Blume Ventures. Some of this money is being used to fund early-stage startups or even mid-to-late stages, he notes.

“Also, we are fundamentally in an easy money regime led by quantitative easing, the need to boost the economy - led primarily by the US. Structurally, a lot of money is getting into the stock market, into financial assets, and some of it is also finding its way into private markets,” adds Sajith.

While June saw the highest number of deals — 121 deals — April stood out as the month that saw the largest funding amount raised at $3.5 billion across 94 deals.

Additionally, between April and May, the Indian startup ecosystem added 11 new unicorns.

The total number of unique startups funded increased by 30.5 percent in H1 2021 compared to H1 2020, with a significant portion of the deals in early-stage startups as investors diversified their sectoral focus.

Non-outlier funding rounds, or disclosed deals of less than $100 million, hit a new record in H1 2021. These deals accounted for $3.8 billion of the total $10.1 billion raised, the highest recorded for the H1 period since at least 2015, as per YourStory Research data.

This indicates that both early and growth-stage startups have been able to attract significant funding from the investor ecosystem.

Both early- and late-stage funding deals remained robust, continuing a trend seen last year. Early-stage startup funding in H1 2021 more than doubled to $1.1 billion from $536 million in the first half of 2020.

The $6.72 billion raised in late-stage funding deals accounted for over two-thirds of the total $10.15 billion raised, as investors continued to bet on startups that are poised to grow significantly due to the pandemic-accelerated digitisation.

By number of deals, early-stage startup funding deals saw 405 deals, 44 percent higher than the levels seen in the first half of 2020.

In H1 2021, growth-stage startups saw a nearly 80 percent increase in the amount of funding raised, but a decline of 23 percent in terms of the number of deals, compared to H1 2020.

The fall indicates that although the ticket sizes have increased, investors are cautious when it comes to growth capital. Investors are looking for business models that can not only showcase future potential but also demonstrate stable business processes and revenue streams, say experts.

Fintech ($1.89 billion across 98 deals) and edtech ($1.41 billion across 65 deals) were the top two sectors, followed closely by foodtech. With only two deals by the two leading foodtech majors — Swiggy ($800 million) and Zomato ($250 million) — the sector made it to the top 3 in terms of sector-wise funding.

In the first six months of 2021, the Indian startup ecosystem saw a total of 15 startups enter the unicorn club.

Within the fintech space, insurtech startup Digit Insurance became the first company in 2021 to enter the unicorn club, with a $18 million fundraise in January, while Bhavin Turakhia-co-founded Zeta raised venture funding for the first time, with a $250 million investment -- the largest-ever-single fundraise for a banking tech startup -- from Softbank Vision Fund 2 that catapulted it to unicorn status.

Meanwhile, Kunal Shah-founded fintech startup CRED, which rewards its nearly six million members for paying their credit card bills, raised nearly $300 million this year and became one of the few Indian startups to turn unicorn after just two and half years since it was started. With that, it became the youngest fintech startup to cross the $1 billion valuation mark and achieve unicorn status.

Shortly after CRED, investment platform Groww, which was started in 2015, became the second-youngest fintech startup to achieve unicorn status after raising $83 million in funding.

In addition to fintech, other sectors like healthtech and social commerce also saw new unicorn additions, with InnovAccer emerging as the first healthtech startup and Pharmeasy the first epharmacy to achieve unicorn status.

Mohalla Tech, which is the parent company of social platforms ShareChat and Moj, social commerce startup Meesho, conversational messaging platform Gupshup, and home services marketplace Urban Company were among the startups in the B2C space that entered the unicorn club. Among these, ShareChat raised $502 million as part of its Series E round, one of the largest funding amounts raised so far this year.