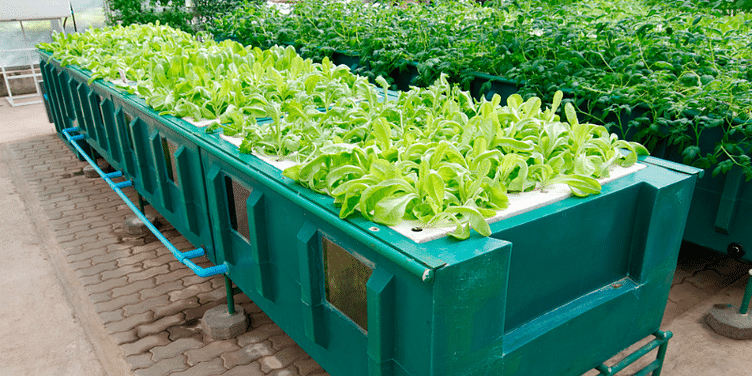 Aeroponics, where plants are grown only with water and nutrients, is gaining traction as it uses less land, less water, and operates in a controlled environment leading to lesser wastage, which can be a boon for the cause of sustainability.

In the early 1700s, Thomas Jefferson wrote in a letter to George Washington, “Agriculture is our wisest pursuit because it will, in the end, contribute most to real wealth, good morals, and happiness.”

Farming has, over the years, changed the course of human civilisation, and then we took on a high premium on land as a key factor of agricultural production. The quality of soil, its fertility, nurture, and value has been a key social and political conversation over centuries.

Over the ages, advances were recorded through mechanisation, irrigation, and fertilisers, and all revolved around improving land and soil quality. However, the latest advances of today are bringing the centrality of land itself in question.

Yes, we are talking about farming practices and methods that do not use land at all. We have come across hydroponics, where plants are grown in inert medium like rocks or coir and are fed with nutrient rich water is probably the most well researched method. And there is aquaponics, where fish are reared in water along with plants.

However, the most interesting among them is aeroponics – growing of plants in air, with the roots not touching the soil but getting their nutrients and water from a nutrient laden mist that is created around the roots periodically.

This method of agriculture was conceived in order to find a way of growing food in space. While the term was coined by Dutch biologist Frits Warmolt in 1957, it only saw some traction in the mid-eighties when patents were filed and aeroponically food was sold in European markets.

Today Asian countries like Vietnam are adopting aeroponics in a big way for a low cost certified disease-free organic produce.

While not much data is available for aeroponics in India, we can get an idea from how the hydroponics market in the country is expected to grow at a compound annual growth rate (CAGR) of 13.53 percent between 2020 and 2027, according to a report by DataM Intelligence.

Aeroponics technique is also known as vertical farming as the crops can be grown in vertically stacked layers in smaller spaces. This gives a huge opportunity for farmers with smaller land holdings to grow crops in enclosed places by taking away the primacy of land and its cyclicality out of the equation. It also allows farming without lower capital investment as much less land is required.

In a predominantly agrarian country like India, aeroponics holds the potential to contribute to the development of the sector and boost production. The technique requires only 10 percent of the area traditional farming needs.

According to NASA, aeroponically grown plants can be harvested three times faster and the yields are more consistent. As nutrients are sprayed onto the plants and roots, and there's plenty of oxygen and other gases in the growing chamber for roots to absorb.

There are a wide variety of fruits and vegetables that can be grown using aeroponics system. Cucumbers, tomatoes, leafy vegetables, pumpkins, gourds, melons, strawberries, and various herbs can be grown with the help of these techniques in closed spaces.

Farming in closed spaces has other advantages. Since nutrients are delivered through a mist, water usage is low. Aeroponics uses almost 90 percent less water than in traditional farming. Also, due to the controlled environment and better use of space, aeroponic farms are able to reduce the carbon footprint of food production.

Farming in a confined space gives the farmer control over pest and locust attacks and sudden heat waves.

In a country like India, space is always an issue. There is a constant pressure on agricultural land and its conversion to other uses and we are losing about 3,000 acres of farmland to real estate or industrial development every day. With Aeroponics the discussions around farming can move away from land constraints to focussing more on sustainable farming techniques.

Sustainability will be a key factor in India’s farming future. India may face devastating climate change effects, including killer heat waves and severe floods, in the next 80 years, says a recent study published in the journal 'Earth Systems and Environment'. The effects of climate change are now becoming severe at an alarming rate.

A farming system that uses less water, operates in a controlled environment leading to lesser wastage can be a boon for the cause of sustainability, especially in a populous country like India.

As aeroponics promises to solve multiple problems through its innovative approach to farming and it is time the technology got its due attention.