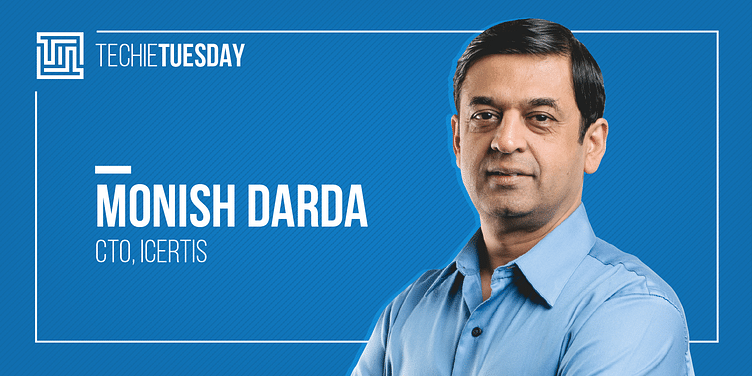 Hailing from a middle-class family, opportunities weren’t handed to Monish Darda on a silver platter. Today, he leads a team of more than 400 engineers at SaaS unicorn Icertis, has built and contributed to the success journey of many companies.

William Shakespeare once said, “It is not in the stars to hold our destiny but in ourselves.” For Monish Darda, this has been the story of his life.

Monish Darda is a familiar name in the world of SaaS. The CTO of ﻿Icertis﻿, India’s second-most valued SaaS unicorn, he is a self-proclaimed “gadget freak”, and an avid gamer. A simple down to earth man with a quirky sense of humour, Monish has been building startups for around two decades, even before the term ‘startup’ became glamorised.

“Being from a middle-class Marwadi family in Pune, most people in our community were traders and business people. In the early days, I learnt how to bargain, make things with my own hands, and do ‘jugaad’,” tells Monish, during an interaction with YourStory.

Today, he leads a team of more than 400 engineers at Icertis, has built and contributed to the success journey of many companies, and is also the co-author of two patents in the area of cloud resource management and provisioning.

[Techie Tuesday] From the US to India’s hinterlands, how Rikin Gandhi built a sustainable agritech ecosystem for farmers

“A middle-class family, one room, nine people..that’s how I spent my childhood in Pune,” begins Monish, adding, “But my parents supported all my dreams,” he adds.

While his father, a mechanical engineer, worked in a scientific instruments laboratory and his mother was a banker, interestingly Monish’s first aspiration was to become a bus conductor.

“I used to collect bus tickets with the help of my friend. I even used to get the sealed leftover tickets from a local bus depot. For four to five years, I collected more than 50,000 bus tickets,” he adds.

Monish had a craze for vehicles, which later pushed him to dream of becoming a pilot. But when he was unable to crack the engineering entrance exam, all his dreams came crashing down. “My parents had a rough beginning. By the time I reached Junior College (Class XI), we had our own house but still donating for college admission was completely out of question,” he said.

However, not all was lost. Monish started with a diploma course, and topped in his first year. He was then offered a seat to study petroleum engineering at a local private college. The first year again went well and the principal offered him to shift to mechanical engineering. After the fifth semester, he went in for a six-month internship at boiler manufacturing company Thermax, whose founder also had a software startup.

“I was once sent to deliver some documents from the factory to the software office. By that time, I was already learning computer programming and had done some work on Fortran. Once the executive there struck up a conversation with me, he rang my trainer at Thermax, to tell if I could work with him. And my journey as a techie began,” he narrates.

At Thermax Software, Monish got his first real-world coding experience. He built software wherein if the parameters were entered, it would give a design of the chimney with a drawing.

After he finished his mechanical engineering, he went to study MS at Florida Atlantic University in the US in 1987 at a scholarship of $11,000 which was a huge sum then. As Monish described, the US was a life-changing experience for him.

After completing his MS, Monish returned to India, leaving his PhD halfway. “I promised my mother that I will come back. I even shunned a job offer as I really wanted to take a break,” he adds.

He started working with one of his father's friends who used to sell soundproof wall claddings. During one of the sales meetings at the Automotive Research Association of India in Pune, he happened to meet an executive who was a graduate of Princeton University.

“When he came to know about my specialisation, he immediately offered to work with him. That was Friday. I joined on Monday,” he chuckles. “And we ended up building India's first data acquisition system for automotive cars, where you could put a sensor in a car or scooter engine cylinder to measure the pressure and temperature inside. This was huge that time, and it sold really well,” he adds.

Meanwhile, a friend from the US came back to India and persuaded Monish to start something of their own. “But money was an issue. This was 1996-97, an era of the dotcom revolution. So, I went back to Silicon Valley, took up an assignment in a small software company in the Bay Area, in Mountain View. I went there as the only person who actually knew Windows.”

He came back after a short stint in 1997 and co-founded Websym Technologies in 1998. Built on the concept of ‘build, operate, transfer’, Websym aimed at encouraging smaller companies from the US, such as Boston-based Storability, to come to India and set up shop.

Icertis Co-founder Samir Bodas was a friend of Websym co-founder. In 2004, as Aztecsoft CEO, he visited their office where both Monish and Samir hit it off.

“I still remember, after the BMC Software IPO in 2009, we both were planning our retirement. However, we both had the itch to building something big. We decided to build a company, not for making money but to build something consequential,” he adds

Thus, in 2009, they both started with no plan in mind. Between 2009-2015, they focused on organisation, hiring, getting the right people, and sustaining it with services.

In 2006, Mindtree acquired AztecSoft and after serving the one-year blocking period post-acquisition, in 2014, they finally zeroed down to contract management and have not looked back since.

“We've redefined that category. Nobody actually thought about contract lifecycle management. Also, we are the only company in the world which has 400 engineers focused on this problem, which makes us a better partner for our clients,” he adds.

On the problem-solving approach

Monish believes there's a big difference between a developer and an engineer. An engineer solves problems, while a software developer develops software. He says both are important but an engineer is thinking about the problem, and not just the technology and the development aspects.

As an engineer and the CTO of a cutting-edge enterprise SaaS company, Monish’s focus is on solving the problem rather than technology.

The key things he keeps in mind while working on any problem is:

“Don’t take advice from anybody. But listen to their experiences and that’s the key to finding the right solutions,” he adds.

Monish also highlighted some of the key learnings during his journey. He believes one should be modest enough to learn from everyone in the room and should be aware of their limitations.

“Remember, it's not the technology that makes the world tick, but the application of the technology. Also, try and find joy in the journey of what you are building and not the destination. Else, you may not grow as a person,” he adds.