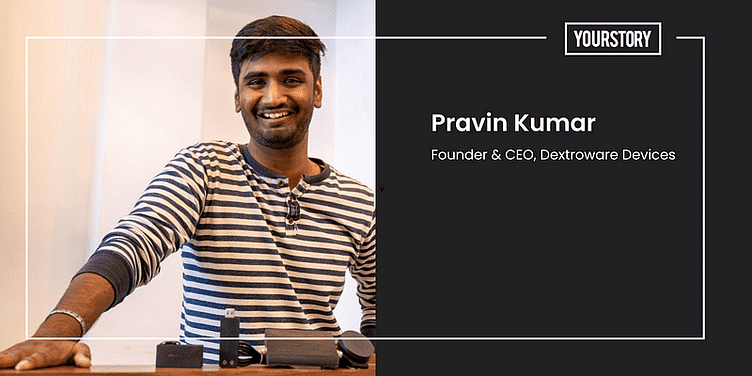 Today, we live in a digital world with most of our careers based on computers. Digital devices have closed the gap between urban and rural populations and have made the job market accessible to every demographic.

“Every person has the right to access such technological tools to strive towards better career opportunities,” says 23-year-old Pravin Kumar, Founder of ﻿Dextroware Devices﻿, an IIT Madras-incubated startup.

An engineering graduate, Pravin took the entrepreneurial route after he realised that Persons with Disabilities (PwDs), especially upper limb (arms) amputees or those who don't have control over their hands and fingers, find it very challenging to use computers.

According to Pravin, out of the 40,000 people who lose their upper limbs (hands), 85 percent live without any assistive devices due to the prohibitively high costs of such arm prosthetics. Also, these pose several challenges ergonomically in interacting with computers or any digital device. Inaccessibility to digital devices is not only limited to amputations, but also due to various neurological disorders like Carpal Tunnel Syndrome, Parkinson’s disease, Cerebral palsy, hand fracture, and so on, he says.

“Not just permanent PwDs, even for those who have met with accidents, from that moment, the person is completely cut-off from technology and unable to rejoin their job. Limited medical and paid leave at the workplace adds to this challenge, forcing them to settle for low-paying jobs less than their capability,” says Pravin.

This led Pravin create a single solution that has the capability to solve these problems and  launched Dextroware Devices in 2020. The assistive-tech startup has developed a head-mounted wearable device called ‘Mouseware’ that enables hands-free operation of computers and smartphones with simple head movements.

Users need to do wear the headgear and rotate their head in the direction the mouse cursor has to be moved.

“Your head movement is synchronous with the cursor on the screen. This device can also be used to operate smartphones, tablets, and smart TVs. The best part is, we are not going to confine the user to wear it in a single method. They can wear it as a cap, spectacles, headset, or head strap,” explains Pravin.

He further explains that the mouse click is performed by multiple accessible switches like footswitch, finger switch, universal switch, etc., and the user is free to choose any accessory depending on their comfort.

“We enable voice typing through a speech-to-text engine that includes most English accents and regional languages like Hindi, Telugu, Malayalam, Bengali, Marathi, etc., as well as international languagues like Chinese, German, French, and others. The user can also execute voice commands that can be customisable to perform tasks or open applications,” says Pravin.

Dextroware has a team of five people that has been working on the prototype, and now the device is ready for pre-orders.

Pravin got the idea to develop Mouseware during his second year of electronics and communication engineering at Rajalakshmi Engineering College, Chennai.

A vivid gamer, he was fascinated to play games in an immersive way like using head movement. During this time, his friend fractured his hand through an accident and he was advised not to use computers and smartphones for four months.

“He was suddenly cut-off from technology and that’s when I realised that rather than for gamers, this tech would be a boon for people with upper-limb disability to operate computers and smartphones,” says Pravin.

Owing to his entrepreneurial mind and tech skills, he developed the concept of Mouseware as a project. The project got recognised through various tech fests like IEEE SS’12, IIT-M Shaastra, and Google - Build for Digital India, where it won accolades. “This validation motivated me to scale it up,” says Pravin.

He set up Dextroware Devices after graduating from college. He presented the idea to the IIT-M incubation cell and got selected. In January 2021, Dextroware was then onboarded into the incubation support of Digital Impact Square, a TCS Foundation Initiative, and the startup got support and some grants from both TCS and IIT Madras, which helped it design and develop Mouseware for commercial use.

Dextroware is working in the assistive tech segment, which according to Pravin, is not well known in India due to many barriers.

“We researched multiple factors and found a way to overcome most of the issues. For example, a vital component of computer usage -- typing, was not addressed by other players developing a similar solution. We addressed it by including a voice typing feature along with customisable voice commands. Also, there was no single integrated solution to operate all smart devices. Another vital barrier was the cost-effectiveness of such an assistive tech. Other players are providing a similar solution at a price range between Rs 45,000 & Rs 1 lakh. “But we have capped the price of Mouseware between Rs 12,000 to Rs15,000 to make it affordable and accessible,” says Pravin.

One of the popular technologies in the same space is Smyle Mouse by US-based Perceptive Devices.

The startup is in a pre-revenue stage, but has come out of the pilot run. It is following a B2B model, where it will work with companies and organisations dealing with PwDs.

Dextroware aims to work with NGOs that work with people with upper limb disabilities. “We are also keen to approach ex-defence personnel who might have lost or injured their hands during their service. Most of the organisations would want to hire Persons with Disabilities for a job and we would also want to join hands with them to enable employment for PwDs. We would also like to collaborate with educational institutions that upskill PwDs, gearing them towards employment opportunities,” Pravin says.

Apart from the differently-abled, the startup is also addressing people meeting with accidents and fracturing their hands. “Hence, we are connecting with physiotherapy and orthopedic hospitals. Mouseware has also proved to be an excellent rehabilitation tool for people looking for physical exercise and at the same time work or play games with muscle movement,” says Pravin.

At present, the Chennai-based startup has started accepting pre-orders and it aims to commercially launch it by January 2022. As of now, it is open to get in touch with people who would like to have early access or experience the Dextroware products before the launch, says Pravin.

IIT-M incubation cell has seed-funded the startup with Rs 10 lakh, which has helped the company complete the minimum viable product (MVP) and conduct the necessary field trials.

“We are currently looking to raise funds for tooling, manufacturing, compliance testing, and certification that would help us launch our product as soon as possible in the market,” says Pravin.

Going forward, Pravin foresees Dextroware’s innovation can become an important tool for anyone with or without a skill set for operating digital devices.