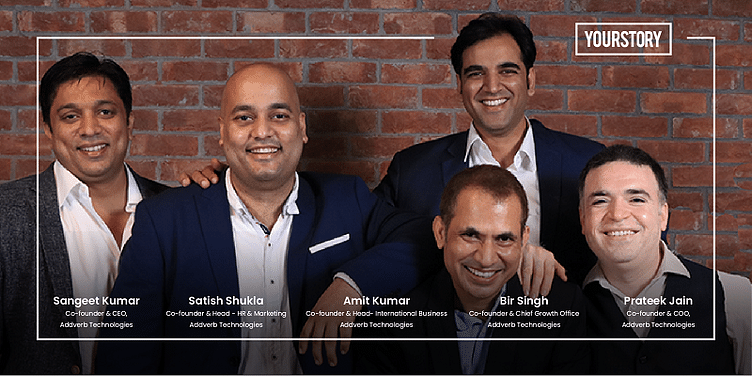 When Sangeet Kumar, Prateek Jain, Amit Kumar, Satish Shukla and Bir Singh were working at Asian Paints factory at Rohtak, the largest paint plant in India, they realised that there was not a single supplier who was well-versed with conventional as well as flexible automation. The vacuum left a regular consumer struggling to find different sets of suppliers and getting them to understand their requirements.

“That was one thing which we definitely wanted to solve,” says Sangeet, Co-founder and CEO of ﻿Addverb﻿ Technology, talking about the unique value proposition of the Noida-based deeptech B2B startup that was founded in 2016, and which is among YourStory’s Tech50 list of most promising early stage startups.

Addverb Technologies is an intra-logistics automation solution provider. It aims to improve supply chain operations by automating arduous tasks related to the storage and movement of goods in controlled environments.

Both Sangeet and Prateek have around 13 years of industry experience each in companies like GAIL (India) Limited and ITC Limited, while Amit has more than a decade’s experience with companies such as Infosys. Satish is a technology evangelist with five years of experience, while Bir has worked with organisations such as JK White Cement Works Gotan, and ITC Limited, apart from Asian Paints, for more than 16 years.

According to Sangeet, earlier, one would have to buy these technologies from outside India as there was not a single company in India offering quality products at reasonable or affordable prices to the end customer. “That is something which I think we have changed, and that too in a big way,” asserts Sangeet.

Delving into Addverb’s real, deep-down impact of smart technology on India’s exponentially growing warehousing space courtesy ecommerce, logistics and organised retail, Sangeet explains, “We have created markets for these products, we also now have competitors coming up. There are other suppliers of these technologies who are building these in India, and we have started that race. This also makes us proud as engineers as there was not a good robotics company that could make high-end robots in India, not only the software part of it but the electronics, the mechanical, the electro-mechanical systems etc. We also recruit from all engineering colleges in India but earlier, if someone had to work in robotics, the obvious choice was to go out of India. That has changed now with the kind of factory and R&D centre, and the platform that we have created, and we are extremely proud of that,” elaborates Sangeet.

One of the biggest milestones at Addverb was getting orders for seven automated warehouses for Jiomart. “Jiomart launched four years back and they chose us amongst all the 20 players who pitched for this project. I think that was one turning point for us. The other turning point was delivering a fully automated warehouse for Unilever,” recalls Sangeet.

In 2 years, automation startup Addverb signs up biggies like Patanjali, ITC, and Coca-Cola

The answer to automating warehouses

Being language agnostic, one of its voice-directed picking technologies can understand up to 14 Indian languages, including Hindi and English, assisting pickers of diverse demographics.

Spreading wings far and beyond

Addverb usually earns revenue via physical sales and channel sales (in some regions). It has a pan-India presence with 100+ clients. According to the company, it has earned a revenue of around $27 million in FY 2020-21. In January 2020, it expanded its operations to Singapore and Australia. Earlier this year, it moved to “Bot-Valley”, which is Asia's most advanced robotics facility situated in Noida, and also opened an office in The Netherlands.

Recently, Addverb also spread its wings further with an office in the US. “Now we have a presence in all the continents... almost,” asserts Sangeet.

The biggest challenge, Sangeet explains, is the problem of popular perception. “Indian warehouses are still considered as godowns and the quality of infrastructure, the kind of floors, the kind of WiFi networking, the kind of lighting etc. in the warehouses serve as the biggest challenge in implementing automation in India. Apart from that since these technologies are not available widespread, finding skilled resources to maintain these equipment is also another problem area,” he elaborates.

There are different kinds of certifications for different markets outside India and for a globally positioned company like Addverb that’s another challenge, which the company plans to quickly learn and overcome. Sangeet is categorically clear that he wants to stay away from the cliche that in India people don’t go for automation owing to cost-effective manpower. That is not true anymore, emphasises Sangeet.

“It is not only the cost of hiring manpower but it is also the accuracy or reliability of delivery of operations that matters. Space utilisation is what is pushing automation or helping automation grow in India,” he elaborates.

The startup, which has a varied client base in the US and Europe, aims to expand all over the world in the long term. They are also looking forward to expanding their manufacturing capacity to cater to the global demand, and are also open to starting micro-factories around the globe to cater to the demand surge (if any) in the respective geographies.

By the end of 2022, they are looking forward to expanding across the globe, especially in South East Asia, the US, the Netherlands, and Australia. In the domestic market, they are ready to foray into new industries such as automobiles. In terms of products, they want to be the single provider of AMR, pallet shuttles, carton shuttles, and sorting robots in the Indian market, and position themselves as a global robotics company.

Sangeet is very clear that Addverb is aiming big and that the company has set aside aggressive plans and very audacious goals for itself.

"We want to be the world’s largest mobile robotics company in the next five to six years,” he says. And what is the biggest challenge for that? “The biggest challenge is to compete in European and American markets with Chinese companies that enjoy huge government support and subsidies,” he explains.

Apart from expanding into supply chains, Addverb also wants to take robotics into healthcare in a big way. “We want to solve the problem of human-robot interaction in that space as now robots are directly interacting with doctors as well as with patients. It is that kind of a dynamic interaction where one need not fear robots and where robots can become friends as you see in a lot of movies. So, it is a technical and scientific challenge, which we really want to solve and contribute to society,” emphasises Sangeet.