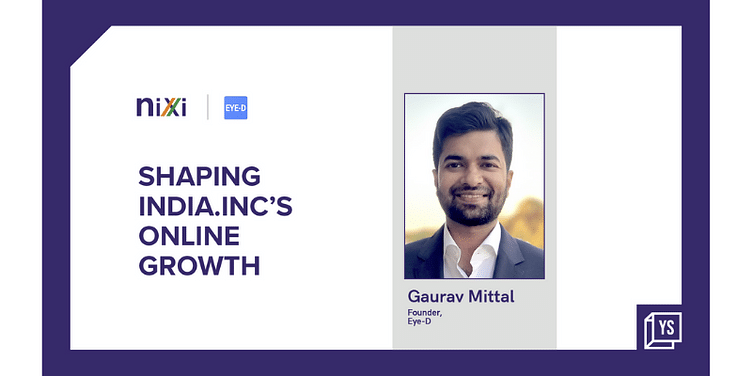 Eye-D, in 2016 launched the Eye-D Pro app that helps people with vision impairment complete daily tasks like reading a printed book or describing an object in front of them.

A chance visit to the National Association for the Blind in 2012 for a CSR event offered Gaurav Mittal a peek into the lives of those suffering from visual impairment. He was surprised to see the members lead active lives despite their disability and perform mundane tasks confidently when assisted by the right technology.

“I was always drawn towards building technological solutions. The visit paved the way for an opportunity wherein I could channel my innovation, beyond my regular job,” says Gaurav.

Over the following years, Gaurav labored over the idea while working a nine-to-five job as an engineer. It wasn’t until 2015 that he tasted success with an app that was designed to help those with special needs.

“The app really struck a chord with users. And, I just had a small team of interns to assist me,” says Gaurav. As small as the success was, it was enough to convince Gaurav to turn an entrepreneur by developing assistive technology solutions and launching ﻿Eye-D﻿.

“I decided to quit my job and jump into the venture full-time. I joined hands with my friend Vaibhav Asthana and started building a team,” he adds. The two were joined by Gaurav’s mother Subodh Mittal, who’s a social activist and has always inspired him to work for social change.

Stepping up to the challenge

In 2016, the team launched the Eye-D Pro app that helps people with vision impairment complete daily tasks like reading a printed book or describing an object in front of them.

“What users need to do is to just pick up their phone and put it in front of the text or object they want to read or identify and the app translates the information into their language. The users can choose from 20+ languages,” explains Gaurav.

What sets the app apart is that it is accessible and affordable as it leverages the capabilities of a smartphone that's easily available. “Our users don't need different kinds of hardware tools like smart glasses or other wearables to use this app, unlike other solutions. The app has infinite possibilities for extension and additions,” said Gaurav.

Another product rolled out by the Eye-D team is the Eye-D Cam. It is a pair of smartglasses that the startup built as part of a pilot project in 2019 with the Barcelona City Council in Spain. “We plan on launching it in a year or two. It helps people with impaired vision walk outdoors with confidence and safely.”

At the same time, Eye-D faced its fair share of challenges before making a splash in the assistive technology sector.

For instance, Gaurav says the earliest challenge that his team faced was getting the target audience to empathise and try out a solution like Eye-D pro. “My family or I had never interacted with a visually challenged person. So, it took some interactions before I could get a grasp of the typical problems that they faced.”

A common challenge that most early-stage startups face is that of fundraising and things weren't very different for the Eye-D team. “When I quit my job, I only had my savings to bank on. So, getting investors was another problem that we struggled with. There might be many grants and opportunities available for social startups today, but that wasn't the case back in 2015,” he adds.

The startup finally made a breakthrough when it was able to get funds from the Karnataka state government by participating in one of its schemes for startups. From there on, the startup went on to build a team, get its marketing right and expand. Today, Eye-D is catering to the needs of over 70,000 people with vision impairment in 160+ countries.

While looking back at his team's journey, Gautam says that Eye-D's success wouldn't be possible without the contribution of several individuals, many of them interns, who helped the startup add new capabilities and fuel change with impactful solutions in assistive technology.

What helped Eye-D reach out to a wider audience was launching a website with a .in extension. The startup launched its official website in 2016 and chose a .in domain name as they were primarily targeting an Indian audience. “By opting for a .in extension, we were able to tell our users that we were an Indian brand. We weren't sitting in another part of the world and building solutions for Indians. It told users that we were there to help them in case they needed to reach out to us.”

The National Internet Exchange of India (NIXI) has helped hundreds of businesses like Eye-D establish themselves as a brand with its .in or .Bharat domain — which is India’s Country Code Top Level Domain (ccTLD). It’s among the few internet exchanges in the world to offer a ccTLD in multiple languages.

Gaurav feels that a .in domain name can help a brand boost customer trust in the local market. Plus, it helped the team build a user-friendly website that could be accessed even by those suffering from vision impairment. “We continued with a .in domain name even when we launched our global operations. It's like building from India for the world. The website helped us gain global exposure,” says a beaming Gaurav.

Shedding light on how a in.extension arms budding startups with a unique tool to compete with bigger organisations, Gaurav states, “By choosing a .in extension a brand is able to create a perception in the consumers’ minds that it is a local player and understands their problems.”

Building a local brand with an international reach

According to Gaurav, the biggest advantage of a .in domain name is that it offers a personalised experience. “When we launched our website, we thought the only way that it would help us is by boosting our community presence. But, thanks to ambitious campaigns like 'Make in India' and other government initiatives, the domain name has visibility even outside India. It is surprising to see how it has enabled us to gain an international clientele's trust,” he explains.

For a startup that's majorly dependent on grants, the COVID-19 pandemic posed a tough time for Eye-D as fundraising opportunities decreased due to a challenging business landscape. Gaurav says that Eye-D was able to power through the crisis due to teamwork. "The team stepped up. Some employees also took salary cuts, which we were able to reimburse later. We shifted to remote working and online meetings to cut costs. But, we ended up doing much better as we raised more funding during the pandemic year."

As technology-based solutions make inroads into the lives of those with special needs, startups like Eye-D have their work cut out for them. The Eye-D team believes that over the next few years artificial intelligence and machine learning are going to play a major role in making assistive technology more accessible for those living with visual impairment.

Talking about Eye-D’s future plans, Gaurav says that his team is working on adding new features to the Eye-D Pro app to enable more visually impaired persons to attend schools and colleges.

“We are trying to build impactful solutions that can boost inclusive education and financial independence among those who suffer from visual impairment. These features would help them land better jobs and contribute to the country’s economy,” he adds.

The Shaping India Inc's Online Growth series chronicles the journeys of startups and SMEs in India and how creating an online presence on the .in or .Bharat domain powered their success stories.