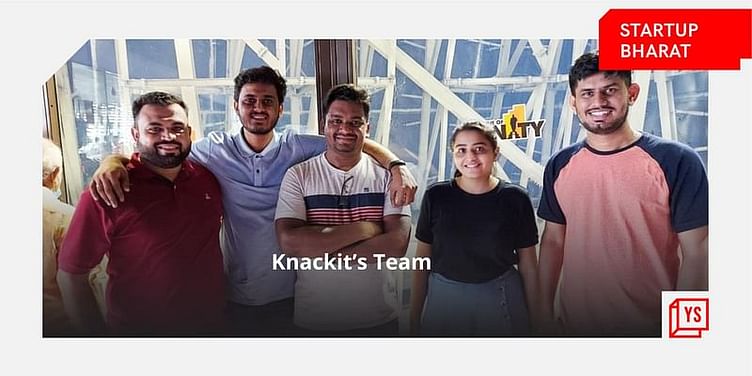 Started in 2020, Knackit has gone from being a short-video app to a monetisation platform for content creators. It recently raised a pre-seed round of $150,000 and targets to onboard five million users on the platform by the end of this year.

When Bytedance’s Tiktok got banned in India, domestic startups rushed to launch clones to take advantage of the void in the short-form video space. Pranjal Kumar, a computer engineer, who earlier worked at Oracle, also launched a short-video app but with a different motive.

“I always found people who were in artistic professions made much less money than people in other professions. I saw this first-hand when I came to college. I used to play the guitar and I thought I was pretty good at it. But the real world showed me how difficult it was to make a living as an artist, even for the best of the best,” Pranjal tells YourStory.

This led him to focus on creating a platform for content creators where they could monetise their content.

Registered in Bijnor, Uttar Pradesh and started by Co-founder and CEO Pranjal, and his founding team – including Paresh Patil, Nirav Prajapati, and Devangi Chhatbar, ﻿Knackit﻿ allows content creators to ask their audience to pay a subscription fee for getting access to their content.

The platform enables creators to take classes, teach, and create entertaining content across painting, singing, photography, and dance, among other categories.

Run by Opus Crawler Pvt Ltd, Knackit was launched as a basic short-video app in September 2020. The company was bootstrapped, with Pranjal investing more than Rs 20 lakh out of his own pocket.

Since the restrictions due to the pandemic led many to spend their time online, the app benefitted from the short-video rage as many users were either creating content or watching videos.

The team had found a small user base with whom they tested out their product and experimented with new features.

“I have given my team a goal to come up with a new feature we can put in the app every week,” says Pranjal.

In one of the app upgrades, Knackit launched a tipping feature where users could tip the creators they have been following, similar to how consumers tip food delivery partners on Zomato and Swiggy.

The feature took off, according to Pranjal, and in the last three months, content creators managed to earn between Rs 1.6 - Rs 7 lakh.

“Creators would also talk about our app on other platforms, like YouTube, which gave us more users organically,” says Pranjal.

The app works in a way similar to Silicon Valley-based Patreon, and adult platform OnlyFans.

Currently, there are 164,000 creators on the platform with 258,000 monthly active users. Out of them, 30,000 creators have a subscription programme. The cost of the subscription and its duration is solely decided by the creators.

“The creators can charge for pre-recorded videos or conduct live classes. For painting and singing, creators usually take live classes. But the demand for dance is not very high as there are many unorganised competitors and a lot of free content is available online,” says Pranjal.

The co-founder also claims the startup has started generating revenue. Knackit charges about 10 percent commission from the content creators when they withdraw their earnings. No fees is charged on transactions between creators and users.

Knackit also raised $150,000 in a pre-seed round from an angel investor and has a team of 26 people, who are working remotely. The development team is based in Surat and Kanpur while the marketing and content team happens out of Namakkal, in Tamil Nadu, and Bijnor.

“Finance is the only thing which is based in Gurugram, and the rest are working remotely out of non-metro cities,” says Pranjal.

An IIM- Rohtak graduate, Pranjal claims their customer acquisition cost per user is in single digits due to cross-marketing, which happens organically. At times, Knackit also approaches famous influencers such as Ankur Warikoo, among others, who charge money for talking about their app.

But even after cross-marketing and word-of-mouth recommendations, acquiring customers organically and without burning a lot of money has been the biggest challenge for the startup. “People are willing to pay once they understand our proposition, but achieving this understanding can sometimes take long,” says Pranjal.

Pranjal and his team still remain hopeful as their user base is growing and is projected to reach up to five million by the end of 2022. The app's retention rate is also close to 26 percent.

The video content market has only started booming, and pandemic-led lockdowns have accelerated internet adoption, leading to new first time users who are potentially looking for entertainment. In India, the number of people watching video content has grown over 24 percent between 2018 and 2020, reaching more than 350 million, according to Bain & Company’s report titled ‘Online Videos in India— The Long and Short of It’.

According to the report, India will have 650 million consuming short-form videos by 2025.