Work & play: Makings of the workforce behind the India’s largest fantasy sports platform 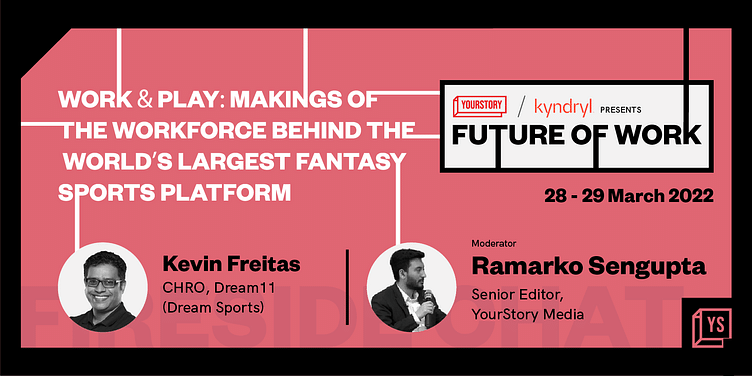 ﻿Dream11﻿ is, without a doubt, one of the world's biggest fantasy sports platforms with a user base of around 12 crores. Launched in 2008, it is also the first Indian gaming company to become a unicorn (startups valued at or over $1 billion). The platform brings the on-ground frenzy of different sports like cricket, football, hockey, kabaddi and basketball to mobile screens.

Apart from all its ‘stripes’, Dream11 is also considered a really cool place to work at. The company’s chief human resource officer (CHRO), Kevin Freitas, gave us a peek into the work culture of the country’s top fantasy sports platform.

“When you know that every single day you are making sports better in the country, that works like a unifying theme for everybody,” said Kevin.

With over 800 employees running the show, Kevin said that the company was in the league of organisations projected for hypergrowth. However, the growth goes hand-in-hand with improving the work culture of the organisation. Hiring the right set of talents is one of the methods to do so.

“We prioritise skills over anything here. We hire the best talent who believe in our vision and our purpose. To find them, we rely mostly on our referral system over job hunting platforms like LinkedIn or even email. In fact, almost 50 to 60 percent of our workforce is hired through referrals,” Kevin added.

Despite the maddening frenzy of fantasy sports, Dream 11 maintains a 360 degree feedback system. From having monthly town hall meetings to one-on-ones, Kevin said that feedback helps both the individual and the team to grow.

“Here, we foster constructive criticisms. Everyone receiving feedback or criticism needs to understand where it is coming from. Again, one must also pay attention in the way the criticism is conveyed. No one completely dismisses criticisms or feedback. And we don’t just listen, but act upon them,” said Kevin.

Constructive feedback mechanism in the company is closely associated with the ‘No-HiPPO (highest paid person's opinion/ highest paid person in the office) Rule’ that the team keeps in mind. It ensures that the hierarchy or job roles do not prevent the contribution of ideas from junior teammates.

“Here in Dream 11, we don’t bow down to the opinion of the highest-paid person in the room but we bow down to the best idea and the best set of data. In sports parlance, we refer to it as questioning your team’s captain. We give freedom to everyone to share their opinions before taking any decision,” Kevin said.

To fail, to rise, to learn

Emphasising the need for a people-first approach in companies projecting hyper-growths, Kevin said, “Sometimes there is this feeling that you might have done great things for the organisation, but what has it done for you? Any future-ready organisation like us needs to keep the people first. This is why we give enough freedom for the employees to experiment and fail. The faster they fail, the better they learn.”

At Dream 11, there is constant brainstorming and experimentation taking place to find the best ways individual employees remain happy at what they do.

“We experiment regarding everything. Be it adopting new technologies or holding a company-culture round during interviews, we try to experiment with new methods and not remain stuck with just one. A people-first approach would need more than policy benefits like holidays and bonuses,” said Kevin.

Even in the presence of hundreds of communication tools, email holds a special place as “the official way of communication”. But ‘Dreamsters’ are going against the traditional norm.

“Only five percent of all office communication happens via mail. That works as the last and final resort. Otherwise, you need to get up from your seat and talk to the person. Apart from this, we use tools like Slack to communicate, but we usually rely on walking up to the person and talking to them,” said Kevin.

While the hybrid and remote model of working can limit in-person interactions, Kevin felt that over time people would recognise the need to go back to the office.

“Remote and hybrid models would work for people only for some time. But after two or three years, people would need others to sit next to them while working. They will understand the value of mentors and grow with other people,” said Kevin.

Looking further at the future, Kevin predicted that both flexibility in work and rising talent would determine market competition.

“The market for fantasy sports platforms is here to rise. The industry will clock about 36 percent CAGR over the next two years. So very clearly, the talent pool for tech, products and design is going to be ballistic. There will be a mix of organisations who will offer hybrid models, flexibility and comfort while trying to get the best out of their people,” concluded Kevin.