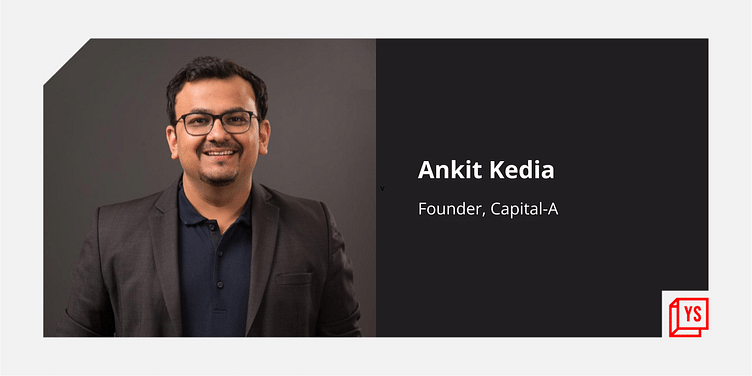 After making 12 investments from its first proprietary fund, early-stage venture fund ﻿Capital A﻿ has initiated discussions for its second fund. The new fund will be anchored by former promoter of plastic manufacturer Manjushree Technopack Ankit Kedia, apart from participation from Limited Partners including High Networth Individuals (HNIs) and emerging family offices.

The Rs 200 crore fund will have a focused approach to high momentum sectors such as mobility and electric vehicles space, fintech, creator economy companies including live commerce. The fund has started the paperwork and has a soft commitment from some of the LPs.

“The second fund is going to be more thematic and structured in terms of the sectors we choose, as we have a lot of learnings from the first fund which this can benefit from. We plan to close it by Q3 of FY 2023,” Ankit Kedia, Founder of Capital-A, told YourStory.

“We want to earmark nearly $3 million per startup if we invest in say 7-8 startups from the Fund 2. We would like to participate in the growth round of these companies because of the limited number of investments we plan on doing from the new fund,” added Ankit.

The venture capital fund has so far deployed nearly 40 percent of its capital from the first fund and will complete deploying capital by 2025, said Ankit. He added that while there were no LPs who had to be shown exits from Fund 1, Capital-A plans on generating an Internal Rate of Return of nearly 30 percent from the fund after its seven-year lifecycle.

The sector-agnostic Fund 1 has invested across companies in the gaming space and direct-to-consumer brands. The fund’s portfolio includes companies like gaming company ﻿Rooter﻿, consumer beverage brand ﻿Svami﻿, and fintech entity Wyld, among others.

Early-stage investments across seed and Pre-Series A rounds grew by 63 percent year-on-year in 2021, according to a report by venture debt firm InnoVen Capital. The report said that the number of deals for the year went up by 30 percent while the average deal size went up by 20 percent.

While this bodes well for young startups, most of them will face the heat in growth rounds, said Ankit.

“Things will get challenging for companies in post Series A investment rounds as there is bound to be a valuation correction for growth rounds. The size of seed rounds have also changed as venture capital funds have raised more capital from the market and want to give longer runway to their portfolio companies with better equity terms,” he added.

Early-stage companies raised nearly $594 million according to the report by InnoVen Capital with nearly 56 percent of deals in the $5 to $10 million range.