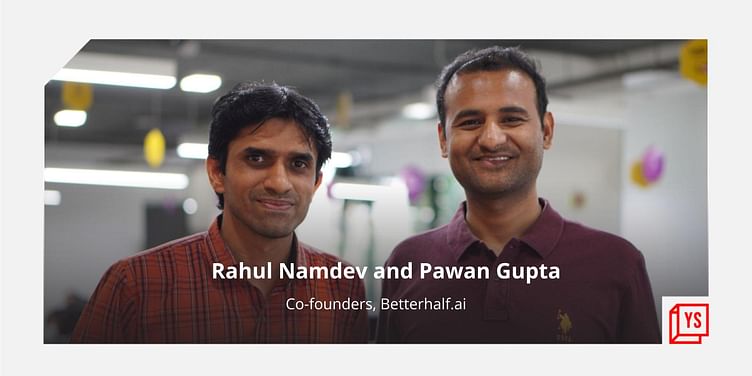 Finding the right life partner is as important as succeeding in our careers. For corporate employees, the two go hand-in-hand. While looking for the right match, finding someone who can support our professional and personal growth, and match our ambitions, is also important.

In 2016, flatmates Pawan Gupta and Rahul Namdev were talking about how difficult it was as corporate employees to find a partner with whom you’re in sync. Using traditional Indian such as through relatives and matchmakers to find the right match didn’t work either.

The duo then pondered about making an app that works as a matchmaker for corporate employees without interference from relatives and matchmakers. Fast forward to 2016, they launched ﻿Betterhalf.AI﻿, an app-based matrimony startup that uses artificial intelligence (AI) to connect people looking for life partners.

Pawan, CEO and Co-founder of Betterhalf.ai, tells YourStory that it is the fourth-largest matrimony app in India. “This is an app that has put Indian working professionals who want to decide upon their marriages in the driver's seat, while everybody else such as relatives and parents is in the passenger seat.”

Growing as a matrimony app

The Y-combinator-backed app was initially founded as a digital platform for matchmakers to connect and exchange information about people looking for potential partners. But the app pivoted to its present form after witnessing the low success rate of its previous business model.

Headquartered in Bengaluru, Betterhalf uses AI analytics to match potential partners on factors such as emotional, social, intellectual, moral values, and physical traits. The most active users of the app are corporate employees between the ages of 24 to 32 (for women), and 27 to 35 (for men) from 30 Indian cities including Bengaluru, Mumbai, Delhi, Pune, Kolkata, and Ahmedabad.

With almost seven lakh users and two lakh connections per month, Betterhalf claims to have successfully facilitated more than 1,000 marriages since its inception.

The platform has evolved from 100,000 monthly average users (MAU) to 500,000 MAU since the last time it spoke to YourStory. The founders say the organic growth was achieved when they turned to social media for marketing. From upping their Instagram game with fun filters to launching their YouTube channel, Betterhalf uses social media content marketing to the fullest.

The startup’s YouTube channel is filled with testimonials of successful matchmaking stories, conversations about love and relationships, tips for finding the right partner, the right wedding wear, and more.

This Noida startup is making smart homes affordable to customers

What makes it different

The startup takes the process of verifying the identity of users very seriously, doing a background check on the person’s social media accounts, including LinkedIn and Facebook, checking the authenticity of the phone number, email, work email, and finally, verifying their government ID.

Users need to give basic details such as name, age, gender and a few images for the onboarding. Post that, the AI predicts their traits such as physical appearance, language, community, hobbies, and partner preferences, and shows a host of potential matches. After doing some activity on the app, users are allowed edit access to correct the predictions and better align with the AI.

The 75-membered team of Betterhalf also focuses on protecting user privacy. Unlike many matrimony websites where contact details are easily accessed, Betterhalf requires users to explicitly and directly ask the person for the contact details.

“Here, we give primacy to the consent of users when it comes to sharing contact details. Users can continue to chat on the app before becoming comfortable to share contact detail,” says Pawan.

For Betterhalf, an ongoing challenge is product expansion and growing its popularity. Pawan feels that while the growth of the app is organic, there is still the need to explore the market, which is dominated by platforms that allow family members to create matrimonial profiles on behalf of their children.

“The market for matrimonial sites where parents and friends are more engaged in the decision-making process for potential partners is seven to eight times bigger than what we are catering to today. So, the task is to develop the product and unlock the market without losing sight of the original idea,” says Pawan.

Betterhalf.ai raised about $3 million in its Pre-Series A round in May 2021 from VC firms such as S2 Capital and Quiet Capital, and individual investors including Kunal Shah and Samvit Ramadurgam.

Saurabh Garg, Founder and CBO of NoBroker, and investor and business advisor at Betterhalf.ai, says, "Betterhalf’s strategy to connect the brides and groom without parents’ intervention is what makes it super powerful and differentiated."

David Greenbaum, Partner at Quiet Capital, said, "We think that the AI-based matrimony startup has taken the best of western dating apps, customised those learnings to the Indian matrimony market, and created a product, which is going to reinvent the matrimony experience for young Indian single"

According to Matrimony.com founder Murugavel Janakiraman, the Indian matrimony market is projected to be worth $500 billion in the next 10 years. In 2022, the online matrimony market in India was estimated to be making around $260 million in revenues. Along with Betterhalf, the market includes major players like Shaadi.com, Indian Matrimony, Bharat Matrimony, and Jeevansaathi.com.

In the coming days, Betterhalf plans to focus on further developing its newly-introduced features such as astrology, wedding planning, and facilitating marriage loans. The team is working on building these divisions for the past five to six months.

(This story was updated to reflect the company's current subscription plans.)