Inside Fractal Analytics’ early bet on AI in decision making 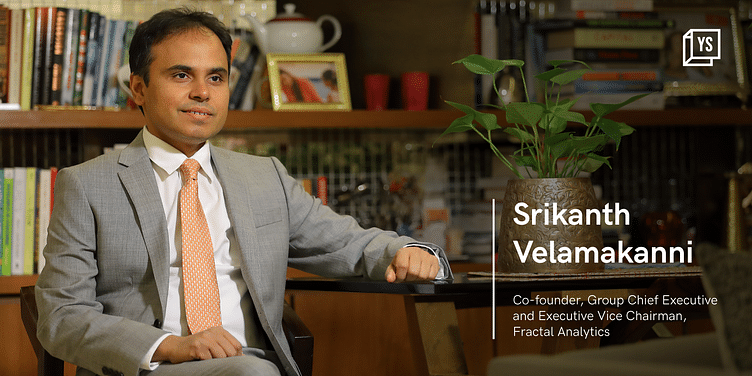 Since 2000, Fractal Analytics has braved multiple pivots and co-founder exits. In 2022, it was one of the first startups to enter the unicorn club.

Based in Mumbai and New York, it has spun off some of its AI products such as Qure.ai and Theremin.ai, apart from making multiple tuck-in acquisitions on the way to bolster its offerings. Most recently, Fractal Analytics acquired Neal Analytics to scale its AI offerings on the Microsoft multi-cloud ecosystem.

At present, only Srikanth and Pranay continue to helm the startup after the other co-founders exited between 2007 and 2012.

Unicorns of 2022: Purplle is 17th startup to enter billion-dollar club this year

Fractal operates in a space where the competitors include Accenture, InstaDeep, McKinsey-owned QuantumBlack, among others.

Technology research and consulting firm Gartner estimates the AI software market to be valued at $62 billion in 2022. This includes applications with AI embedded in them, as well as software that is used to build AI systems.

Moving closer to Fractal's current selling point, according to a report by MarketsandMarkets, the global Robotic Process Automation (RPA) and Hyper Automation market is estimated to grow from $9.2 billion in 2022 to $26 billion in 2027 at a CAGR of 23.1 percent.

The report says that the growth will be boosted by three broad buckets of technology—digital transformation with advanced techniques, surging demand for artificial intelligence and machine learning (AI/ML) and advanced analytics technologies, and rising demand for automated solutions for business continuity and planning.

This primes Fractal Analytics for growth and capturing a bigger share of the market. In a conversation with YourStory, Srikanth Velamakanni, Co-founder, Group CEO, and Vice Chairman at Fractal, says that the company is ready for its public market debut as soon as the indicators are favourable, which will be a part of its “100-year journey”.

He adds that in the coming year, Fractal will work on bringing data and algorithms to every client decision, use cutting-edge AI to automate and build self-learning systems and design for humans by bringing in behavioural economics and design thinking.

YourStory (YS): How has Fractal evolved since 2000? Can you tell us about your journey to becoming an AI company?

Srikanth Velamakanni (SV): If I divide the industry into three distinct phases, pre-2010 was the cottage industry phase as we could not do it at scale. From an algorithm standpoint, deep learning hadn’t made much progress at the time. Around 2008-09, there was research popping up on deep learning making big strides, and by 2010, it was clear that a revolution was unleashed when Mark Zuckerberg was seen attending an AI and deep learning training programme in Canada in 2011.

Between 2010 and 2015, there were significant investments in AI by Big Techs, including Google, Microsoft, Facebook, Amazon, Netflix, and others. Fractal started to see the first signs of the industry scaling up around the time, and we built our first set of products in the world of AI.

We made presentations to some company boards and ramped up our investments, incubating Qure.ai and Crux Intelligence. We raised a couple of rounds between 2015 and 2020. And since the outbreak of COVID-19, the whole world has moved to AI and there is significant growth.

YS: What were the challenges while transitioning from analytics to AI?

SV: It was a very smooth continuum as the underlying questions for a company remain unchanged. It is just the way you solve it and what is possible that has changed. For this, you have to invest nearly three to five years ahead of client needs, and we jumped up our research and development investment from 3-4 percent of revenue to 12.5 percent.

Secondly, you have to hire people oriented towards learning as opposed to those who only have the right skill set. So, we started investing significantly in our learning and training programmes within Fractal and started hiring people with that mindset. Those were the two big changes we had to make but otherwise, it was a relatively smooth journey.

YS: Can you tell us more about your customer mix and which geographies are they in?

SV: Consumer goods companies or FMCG companies make about 40 percent of our revenue. The second most exciting industry we serve is technology and then financial services where Fractal has always had a stronghold. It is 40:20:20:20.

Also, when COVID-19 hit, healthcare took off and now it has settled down. Across industries, there is a push towards digitisation and digital transformation.

Nearly 70 percent of that comes from the US, 20 percent from Europe, and the remaining 10 percent from APAC (Asia Pacific). While the US continues to grow, we see that Europe and APAC will grow faster than the US.

YS: How is the customer churn now and what is the average metric?

SV: We work with close to 140 clients and these are all $10 billion-plus revenue clients. When targeting clients, we go by the 10-20-30 rule—it should either have $10 billion in revenue, $20 billion in market cap, or 30 million customers.

The customer churn has certainly decreased and our net dollar retention rate is at a healthy 128 percent for existing clients.

The rise of insurance tech: Digit Insurance raises record $44 M in second round of funding

YS: There have been discussions around your public market debut for a while. Is there a timeline?

SV: We could have gone public when we hit the scale at $100 million operating revenue in FY 2020. We just did not and when the pandemic hit, we first thought it might have a negative influence on Fractal’s revenue and we were worried any recession that ensues will involve cutting down spends.

So, we got very busy trying to build Fractal for the long term and keeping our heads down on building this company for the future. Only in late 2021 did we realise that we had scaled to a level where we could have been public.

We think of it as a 100-year journey so going public is consistent with that mindset. If the markets are permissive, it is just a question of timing and getting our ducks in a row.

(This story was updated with the company's current valuation and FY 2020 revenue.)