Is the EV market in India ready to swap batteries? 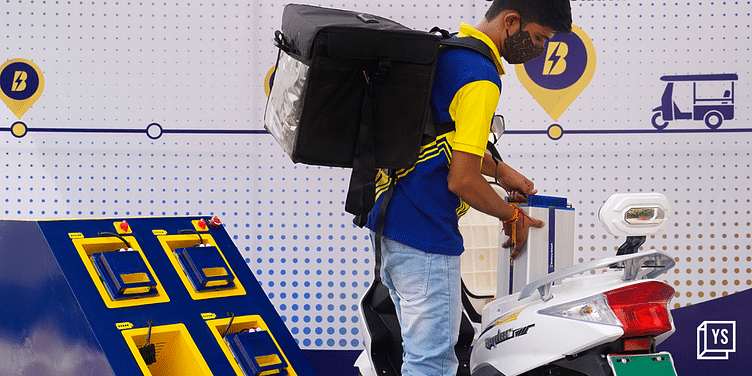 Battery swapping promises to jumpstart the electric vehicle market in India by alleviating range anxiety and reducing cost of ownership. There is growing interest from homegrown startups and players from Taiwan too. But the segment has to tackle a host of challenges before it can take off.

Last week, Taiwan-based electric vehicle startup ﻿Gogoro﻿ outlined its plan to roll out its ‘6-second’ battery swapping stations for two-wheelers in Delhi-NCR this month. Another player from Taiwan—contract manufacturer ﻿Foxconn Technology Group﻿—too is eyeing the battery swapping space in India.

Foxconn is likely to enter the domestic market either with Gogoro or on its own, according to a report by ET Prime, and is awaiting regulatory clarity to introduce its battery swapping infrastructure in the country.

The policy is targeted at supporting battery swapping systems to be used for light electric power train vehicles—two-wheelers, e-rickshaws, and e-carts.

Battery swapping refers to the exchange of a discharged battery for a charged one at a swap station. It has been gaining traction in the market as a solution to address range anxiety, one of the biggest impediments to large-scale adoption of EVs.

Currently, it takes three to four hours to fully charge the batteries of two-wheeler and three-wheelers. While there are faster charging options, they still have a downtime of an hour. Battery swapping is swift (matter of a few minutes/seconds) and customers do not have to play the waiting game anymore.

Battery swapping could also help solve the challenge of setting up large charging infrastructure in urban areas with space constraints—it can take place in smaller spaces. A battery swap station can be set up as standalone entities or even outside kirana stores.

Battery swapping is also expected to reduce the upfront cost of buying EVs. The fundamental component in an EV is a high voltage battery, accounting for 40-50% of the cost of production. With battery swapping, customers have the option of buying an EV without a battery; they can opt for a swap subscription and load a swappable battery into the vehicle.

Currently, the startups operating in the battery swapping market in India include Delhi-based Battery Smart and Sheru and Bengaluru-based Yulu, Bounce Infinity, and Sun Mobility.

Yulu offers electric mopeds, while Bounce Infinity sells scooters. Both companies offer customers the option to swap batteries of their own brand.

Recently Yulu signed an MoU with the Government of Karnataka to invest ₹1,200 crore to create over 7,000 jobs, deploy a fleet of 1 lakh EVs, and operationalise the “largest” EV battery charging and swapping infrastructure in the state over the next 5 years.

Yulu is forming a new entity, Yulu Energy, with ﻿Magna International﻿, to create a nationwide battery charging and swapping infrastructure to cater to the demand from Yulu vehicles as well as vehicles made by other manufacturers. This infrastructure, the company believes, would reduce cost of ownership and accelerate EV uptake in India.

“We believe that small form factors like electric two-wheelers and three-wheelers are the future of mobility, and in both of them battery swapping fits well. It helps reduce the cost of ownership of EVs,” says Jaideep Kapani, Head of Business Development, Yulu.

According to Kaushik Burman, General Manager, Gogoro India, the reasons to expand to India are the size of the market and the government's push for EVs, which is giving international players "great confidence".

It would be interesting to see if EV manufacturers that have their own charging infrastructure jump on the battery swapping bandwagon.

For instance, ﻿Ather Energy﻿offers the Ather Grid network of charging points with rapid charging capability. As of October, Ather had around 580 public fast charging points across 56 cities in India.

Reliance-backed ﻿Altigreen﻿ believes battery-swapping is not an option for the company’s last-mile EVs, whose battery weighs 120 kg. The company has a “fast-charging technology”, in collaboration with Exponent Energies, to charge the battery in 15 minutes.

However, Altigreen realises that there is a future in the battery swapping segment and has started discussions for swapping solutions.

“Altigreen is not against swapping. We believe there are use-cases that are best supported through swapping. We are already in discussion for a swapping solution where both swapping infrastructure and battery packs will be owned by them (B2B customers). But we do believe that fast-charge batteries will be a use case that will compete with swapping,” says Amitabh Saran, Co-founder, Altigreen.

If battery swapping manages to mitigate range anxiety with a sizeable network of swap stations and reduce cost of ownership, it could pave the way for greater application of EVs across customer segments and use cases.

For all the optimism and focus on battery swapping, the road ahead is not without bumps and speed breakers.

In fact, battery swapping has not taken off in a big way anywhere in the world, other than in Taiwan, led by Gogoro.

Gogoro says over 125 million battery swaps take place annually through its 2,400 battery swapping stations across Taiwan, and that a total of 350 million swaps have been completed. In Singapore, the company has piloted two swap stations and 20 vehicles, while in Indonesia it has 400 vehicles and seven swap stations.

Here's looking at some of the key challenges in India:

To reduce range anxiety, players must set up a large network of battery swapping stations. Players point out that setting up a swap station is capital intensive, requiring labour, suitable real estate, and access to quality power for charging and creating power capacity.

“Swapping stations need to be set up, power supply must be provided for these stations, and workers must be trained and available to help in swapping. Sluggish growth in any of these critical areas would be a bottleneck in battery swapping’s growth,” says Ankit Mittal, Co-founder and CEO, Sheru has over 250 stations across the Delhi-NCR region.

Yulu has over 75 swapping stations across Bengaluru, Delhi and Mumbai, one every 2.5 kilometres, while Bounce Infinity has 300 swapping stations in Bengaluru, one every 2-3 km. Battery Smart has more than 350 swap stations across 12 cities such as Delhi, Faridabad, Gurgaon, Jaipur, and Lucknow, while Sun Mobility has over 150 swap points across 18 cities in India, including Delhi, Bangalore, Gurgaon, Chandigarh, Trivandrum, Calicut, Noida, and Mumbai.

According to the draft policy, the government has planned rollout of battery swapping stations in two phases. Under the first phase, metropolitan cities with a population greater than 4 million (as per Census 2011) will be prioritised for development of battery swapping networks. State capitals, union territory headquarters, and cities with a population greater than 5 lakhs will be covered under the second phase.

For battery swapping to work smoothly, there must be easy access to a large float of safe, standalone batteries in the market.

A swapping station would typically need at least four float (standalone) batteries. Of course, this number depends on the size of the stations. Currently, Sun Mobility’s stations hold 15 batteries each, while Yulu’s stations have 12 batteries and Battery Smart stations hold four.

Interoperability is a crucial factor for battery swapping to succeed. This means battery packs in EVs must be standardised so that they are compatible with many vehicles, brands and models.

Currently, Yulu and Bounce Infinity allow users to swap batteries of only their own vehicles.

Battery Smart and Sheru operate with interoperable battery models. These batteries are produced by different battery manufacturers but are identical in specifications and dimensions and can work with most three-wheelers in the market.

However, an analyst who tracks EVs says the government would not come out with standards that would hinder innovation. “The battery swapping players would have to partner with OEMs to manufacture batteries,” he says.

One of the key principles of the government’s draft policy is to “establish the principles behind the technical standards that would enable the interoperability of the components within the battery swapping ecosystem, without hindering market-led innovation.”

In addition to all this, users must be educated on the proper handling, storage and disposal of batteries to ensure their safety.

When different batteries go into different vehicles, it’s difficult to maintain consistency, quality and range (kilometres on a single charge), as the cell’s behaviour varies with temperature, state of charge, current demands, and usage.

Users may not know the exact condition of the battery pack before the swap—if there was any internal damage etc. The problem could show up during use or later too in future swaps.

Possible scenarios and use cases

According to a report from EY, Indus Law and IVCA, while swapping technology is available for all types of vehicles, battery swapping is more suitable for lower-capacity batteries of two- and three-wheelers.

While it is theoretically possible to divide large battery packs into smaller packs for use in four-wheelers, high currents drawn from parallel packs tend to cause disparity in charge levels, leading to uncertain/unpredictable ranges (with every swap), says Amitabh of Altigreen.

Going forward, the B2B segment is expected to lead the way in battery swapping, as users in this segment require quick charging/turnaround time.

The analyst quoted earlier says battery swapping is a very effective solution for fixed route commercial users. According to Kapani of Yulu, battery swapping could allow EVs have a wider customer base and use cases like gig delivery.

If the challenges can be tackled, keeping in mind the unique needs of the battery swapping business model, battery swapping can solve some of the tricky issues that the EV market has been grappling with. A proper roadmap for different segments—two-wheelers, three-wheelers and commercial fleets—must also be put in place for widespread adoption of battery swapping.