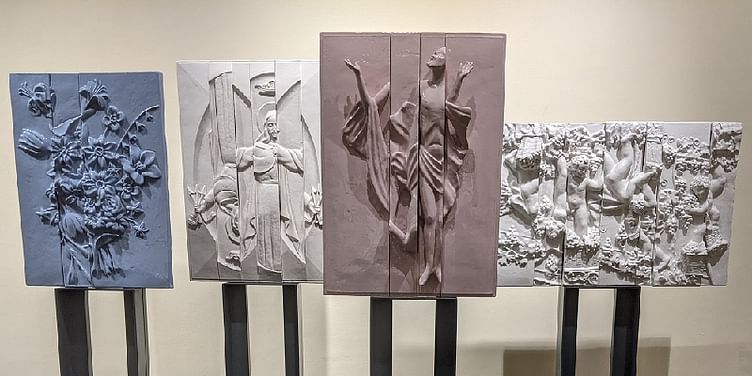 In our photo essay from Karnataka Chitrakala Parishath in Bengaluru, we showcase artworks and insights by Italian artist-designer Andrea Anastasio.

The Consulate General of Italy in Bengaluru recently launched its first show, Binary Codex at Karnataka Chitrakala Parishath. It featured the works of Andrea Anastasio, an artist, designer and thinker who has been working between Italy and India for the last 30 years.

The retrospective exhibition was curated by Domitilla Dardi, senior curator of MAXXI Museum, Rome. Some of the exhibited works are the result of collaboration with Indian craftsmen as well, in the spirit of artistic jugalbandi.

The featured Indian artists are Avinash Veeraraghavan and Bhajju Shiam. The exhibition was also accompanied by public lectures and workshops. The traveling exhibition was held in Mumbai and Delhi as well.

Andrea also bridges the borders between craftmanship and so-called “fine art,” Alfonso adds. “This is something that I find very relevant in today’s world, even more so in a country with such an incredible artisanal tradition as India,” he emphasises.

Andrea has a background in Eastern studies, and holds an MA in Indian philosophy. He is a designer and self-taught artist, and has working in close partnership with craftsman communities. He is well-versed in production processes and their cultural implications.

“My approach to design is intertwined with my art practice, as I am interested in generating linguistic short-circuits. Conceiving a chair or a vase means investigating the domestic world and the different cultural meanings contained within the object,” Andrea describes.

Andrea has worked on UNESCO architectural projects, and contributed to translations of Indian books and publications. He has travelled extensively in India and resided in Chennai and Bengaluru. He has exhibited at a number of cultural centres and galleries in Asia and Europe.

Some of the exhibited works are titled Sinopie and Jungle Mall. Themes addressed include nature, consumer society, and the vulnerability of minorities' cultures. Andrea’s other artworks have won awards such as the Best Light project at Eurolight 2017.

“My approach to design is mainly anthropological, investigating the ritualistic processes that are hidden behind our daily unfolding of existence. I also conceive most of my projects in relationship with crafts communities from different cultural backgrounds,” Andrea explains.

His work counters the compartmentalisation of disciplines, and the separation of craftsmanship from art, design, and architecture. “Although I see and understand the different takes into reality that these fields do imply, I feel that art is not made just by non-functional works, and handcraft is not defined just by skill,” he affirms.

“What is stated through these different languages matters, rather than placing them into a hierarchical structure,” Andrea emphasises.

“Form and function become the tool to generate new narratives while encouraging viewers and users to engage with their own understanding of space and daily existence,” Andrea sums up.

(All exhibition photographs were taken by Madanmohan Rao on location at the gallery.)