From Byju Raveendran's apology to Vani Kola's mantra for scaling startups: Recap of Day 2 at TechSparks 2022 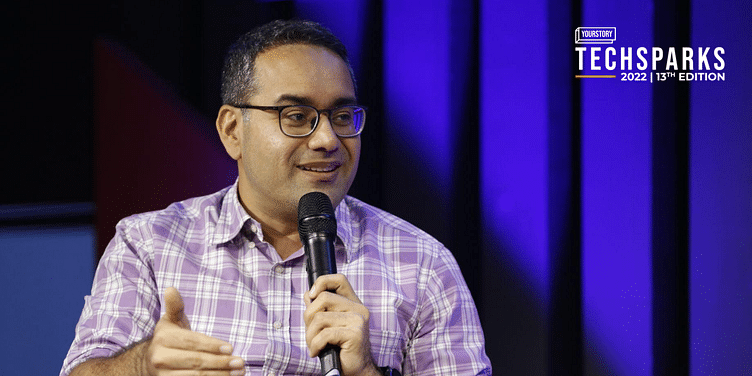 Day two at TechSparks 2022 was as eventful as it was promised. Here's a look back of today's lineup from the startup ecosystem, including the likes of Byju Raveendran, Kunal Bahl, Vani Kola, Kabeer Biswas, and more.

Day Two at TechSparks 2022—the 13th edition of YourStory's flahship startup-tech summit—kicked off with a no-holds-barred conversation with Byju Raveendran, with the ﻿BYJU'S﻿ founder apologising in an impassionate speech for not only taking some tough business decisions during the year, but also chasing fast growth.

Byju did not hesitate to admit that he made mistakes. However, the pioneer of the edtech sector, added that though he will continue to make mistakes, it is more important to correct them.

"There's no scope for short-term optics. Just like anyone else, when you grow this fast, we've made our fair share of mistakes and we're sorry about it,” he said during a fireside chat where he was joined by BYJU'S co-founder Divya Gokulnath. “We are correcting our mistakes to move further.”

At one point, Byju sprang up from his seat to make a point about how passionate he was building the company, and how he believed in the mission of affordable, accessible education for all. He said he was "all in" at BYJU's, and that he wanted to continue doing that for the next few decades.

The entrepreneur duo urged that people focus on FY 2022 numbers, where he expects revenue to jump 3X and losses to narrow.

"If you give me Rs 100 also, I will put that back in BYJU'S. When you are privileged enough to make such a big impact, it is criminal to become complacent," he spoke.

﻿Dunzo﻿ CEO Kabeer Biswas took to the stage next to talk about the business of quick commerce, confidently stating that next-day delivery will become redundant in the next five years.

Ecommerce platforms must revamp operations to ensure deliveries are fulfilled within a day, and eventually within the hour, Kabeer said during a fireside chat.

"In the next five years, next-day deliveries will be dead. Consumers will want groceries and essential items faster and within hours. This is the future of quick commerce in India," he said.

He also spoke about the growing competition in his space, what he was doing to increase efficiency at Dunzo, using drones for delivery, and why the logistics infrastructure needs further improvement.

Read more about the session here.

Vani Kola, Founder of ﻿Kalaari Capital﻿, and a lifelong champion of women founders and startups, predicted that several Bengaluru-based companies will go public in the near future.

She also discussed the potential pitfalls startups may face along the way and how to overcome them on the path to going public.

According to Vani, setbacks are an important part of the journey to go public. “What is important is how fast are you going to react,” she said, adding that these outcomes may not be as random as they seem.

On the lines of what ﻿Zerodha﻿'s Nithin Kamath said on Day 1 of TechSparks 2022, Vani reiterated that placing importance on 'valuations' was a big mistake.

"Time and again, I have seen valuation derail the mission and purpose of why the founder started the company in the first place,” she said.

Web3 was the flavour of the day, with the most evangelical Indian Web3 stakeholders lifting the curtain and deconstructing the space for the audience.

In the first of many discussions, Shailesh Lakhani, Managing Director at Sequoia Capital India, said, “In Web3, users have much more say; it’s a way to distribute value.”

He added that since the technology was still in its infancy, the sector will, in the future, experiment with varied business models and new approaches. He cited the example of NFTs and their growth.

In another panel discussion, Priyeshu Garg, Co-founder of ﻿Router Protocol﻿; Ashish Singhal, Co-founder and CEO of ﻿CoinSwitch﻿; and Pranav Sharma, Founding Partner of Woodstock Fund; discussed the future of decentralisation.

For Priyeshu, decentralisation is a tool kit. “Instead of giving power to stakeholders, users will have more power," he said.

In the final panel discussion, Neeraj Khandelwal, Co-founder of ﻿CoinDCX﻿, and Harsh Rajat, Founder of PUSH Protocol, discussed how web2 can play a role in bringing the next billion users to Web3.

Snapdeal and Titan Capital co-founder Kunal Bahl then took to the stage to lay out the action plan for founders navigating the funding winter.

The secret is to not lose hope, acknowledge the fact that a crisis is upon us, and channel that 'founder passion' into coming up with a solution, he said.

"The only thing that matters during tough times is the solution. Be very missionary about 'doing the work' instead of reminiscing about the good times. And don't give up," he said.

Kunal also laid out three things that he looks for when making an investment, which you can read all about here.

The day ended with an action (and conference hall) packed conversation with BeerBiceps founder and Youtuber, Ranveer Allahbadia.