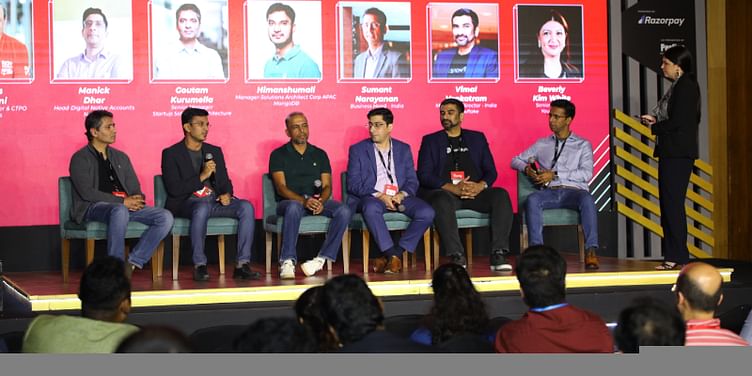 In a discussion themed ‘Building an efficient and robust tech infra’ during the recently concluded TechSparks 2022, panelists deep-dived into various facets of IT infrastructure ranging from data to cybersecurity threats to what it takes to become a digital-first economy.

If the last couple of years has taught us anything, it is that organisations need to pay more attention to their IT infrastructure, which is considered one of the mission-critical drivers of a business. Today, a robust IT infrastructure can act as a significant competitive advantage for any organisation.

In a panel discussion themed ‘Building an efficient and robust tech infra’ during the recently concluded TechSparks 2022, Goutam Kurumella, Senior Manager, Startup Solutions Architecture at ﻿Amazon﻿ Internet Services highlighted on what a robust tech infrastructure means to you and your organisation. “Is it secure? Is it efficient? Is it scalable? Is it performing well? These are the answers that you need to figure out, and then you have to build for that. You can only raise the bar based on parameters you define, and the blueprints will actually help you to get to that point,” he emphasised.

Sharing his perspective, Himanshumali, Manager – Corporate Solutions Architect Corp APAC, ﻿MongoDB﻿ said that even as companies are often veered towards innovation and being more agile, they are deterred by the legacy data systems and infrastructure, which hampers their flexibility and adaptability. According to a recent report published by MongoDB, 70 percent of digital transformation journeys that companies set out on don't reach the maximum output that they are intended to.

Suhas Kulkarni, Founding Partner and CTPO, ﻿Stanplus﻿ put forth key metrics that one needs to keep in mind before choosing the right tech infrastructure: latency, operational excellence, time to mitigation and debuggability of the tech stack. “It really comes down to SLAs and the experience you provide to your customers, and then you work backwards and look at what it actually means to the services that you build, or the databases you rely on,” he said.

Getting more out of a secure infrastructure

Building on the build-versus-buy conundrum, Suhas is of the opinion that while there's a temptation to go and buy tech products to get the job done, it also boils down to what sort of intellectual property one is building. “It's the secret sauce that you're building, that should be your own. And that's the one thing you need to build yourself,” he believes.

However, Vimal Venkatram, Managing Director- India (Sales) at ﻿Snowflake﻿, thinks otherwise. In his view, “If that is not your core revenue generating application, buy, don't build.” According to him, when you build your own tech product, it needs to be maintained, add new features, create newer versions and build development capabilities around it. “There are companies doing that and spending billions of dollars on research for a reason, you then end up competing with those companies, which is next to impossible, and you end up losing focus on the core business model,” he said.

Shifting focus to data, a valuable component to tech infrastructure, Vimal said that while everybody wants to be a data-driven organisation, what holds the key is what do you want to do with the data. Once you understand the business objectives, then the timeliness, sensitivity and criticality of the data becomes primary, and how you achieve that is just a byproduct of all the Ws that you've asked in the first place. “And that's where folks like us come in and make it super easy for customers to consume data at scale, whether you want to do data sharing or monetise it; but it all begins with a business intent and timeliness in mind,” he said.

Delving into the cybersecurity threats targeted at businesses in India and how organisations should look to defend against these attacks, Sumant Narayanan, Business Head – India at Akamai Technologies, deep-dived on the attacks on APIs and ransomware. “You'd be surprised how many organisations don't have a repository, or a catalogue of all their APIs. And that's the perfect backdoor for any system, and then the next - data. There are very sophisticated API focused attacks, which again, result in data theft and downtime. These might sound complex but organisations like Akamai have solutions for this,” he said.

India alone has seen about a 50 percent jump in ransomware attacks compared to last year. They typically target some vulnerability in applications. Also, with people working remotely, it's a lot easier for attackers to enter systems. “All they really have to do is just find that one loophole to get into your system, and then they can create havoc after that. More importantly, the interesting part is, it's just so much easier to launch a ransomware attack right now. Ransomware is now available as a subscription service,” said Sumant.

Shedding light on the three major pillars for a digital-first economy, Manick Dhar, Head - Digital Native Accounts, Nutanix said the first milestone for a digital-first economy is when people can get what they want on their devices efficiently and at a cheap cost. The second pillar is the ecosystem of innovators. India has a burgeoning ecosystem of startups who are solving consumer problems.

“You need data for that; and for that, you need to have specific products or services that you are delivering to the target market,” he said. Elaborating on the third important pillar – enablers – Manick said that while government policies hold key, technology providers who help these startups to build their products and services and support them through the journey of developing their applications and going to the target market are equally important.

On concluding lines, panelists affirmed that it is critical to prioritise scalability when investing in any new IT infrastructure given the rapidly changing digital landscape.