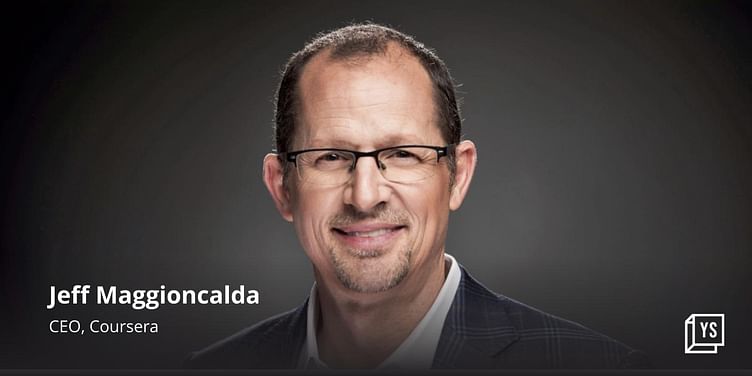 In a conversation with YourStory, Jeff Maggioncalda, CEO of online course provider Coursera, talks about his journey, the growth of the edtech startup amid the pandemic, and plans for India.

It was 2020, and the world hadn’t woken up to the COVID-19 threat. But Jeff Maggioncalda, CEO of global edtech firm ﻿Coursera﻿, knew the problem would surface soon.

The company, which had launched Coursera for campuses in October 2019 in India, was set to launch in China in 2020.

“I was in China in December 2019, and I was watching [COVID] closely. We were working with Duke University, which had a partnership with Wuhan University. When COVID broke out, the campus was shut and all professors and students were quarantined. We were asked if we could offer our two-year programme for free as coursework needed to keep going,” Jeff recalls.

The incident made him wonder: if Duke University had shut down due to COVID-19, would other universities follow through? This was in January 2020 when people didn’t think COVID-19 would go beyond China.

“But campuses everywhere started shutting. By February 27, every school in Japan was closed. I was at the airport and wrote an email to the executive team that every school in the world would soon follow. I just wanted to be prepared with Coursera Campus, tweak it for every school and university,” Jeff tells YourStory.

Jeff’s diligence paid off. In March, his team announced Coursera Campus with tweaks, and within seven months they went from 30 customers using Coursera for Campus to close to 4,000.

But it didn’t stop at that.

Jeff knew jobs would soon be hit, and the team simultaneously worked on a workforce recovery programme, which they started offering to governments.

“We have been nurturing and developing these relationships that we started during COVID. I think the world is never going to be the same again. Online learning is going to be happening in every school, remote work is going to be happening in every company. You will still have offices, but a lot more remote work. Just like that there will be campuses, but a lot more online learning. In this new hybrid world, we are going to find a new balance,” he says, adding that this time was helpful to “all edtech platforms”.

The company now believes that the future of higher education exists at the intersection of university and industry, as millions of learners come to Coursera for job-relevant skills and industry micro-credentials needed for today’s in-demand careers.

It’s been a long journey for  someone who didn't have a background in education or edtech when he took over the reins of Coursera in June 2017.

Prior to joining Coursera, Jeff was at Financial Engines, and had seen the company grow - from starting up to going for an IPO.

“I was 27 years old, and had just graduated from Stanford Business School. I had accepted a job at McKinsey when I got a call from a professor at Stanford who said he and William F Sharpe were starting a company and wanted me to write the business plan. William F Sharpe, a Nobel prize winner in Economics, was a hero to me and there was no looking back,” says Jeff, of his Financial Engines journey. This was until 2015.

In 2017, Jeff received a recruiter’s email, with a job offer: as the CEO of Coursera. But he wasn’t sure as he had promised his wife time to travel.

“We got married very young and immediately had children. I was 27 when I became a part of Financial Engines so we never got to do any of the fun travel stuff!” Jeff says.

His journey at Financial Engines had been long. He went from student to consultant, going on to raise funding and even launching an IPO.

“Sometimes you fail, but you learn and deliver better the next time. There were a number of times where they told me, ‘If you do not get this, we are going to fire you!’ And it was not like I was not trying; I was trying really hard. You ultimately have to be accountable for creating success.

“There is a myth that failure is celebrated in Silicon Valley, but that’s not so. Learning and success are celebrated. If you fail, you are a failure - that is all there is. But if you fail, learn, and then succeed, that is what everybody loves. It is because you figured something out. Silicon Valley really wants people who can figure things out, stay at it, and keep trying different versions, until something clicks,” Jeff says.

He rewinds to the email with the subject line, ‘I think I found your next job’, and recalls that he was intrigued.

“I told my wife that I had received an email from a recruiter I knew well and she asked me to connect. I was told about Coursera and that the company was looking for a CEO, but I had no experience in higher education,” Jeff says.

Jeff mentioned the offer to his wife, who has been a professor. “She said, ‘I love Coursera, it is great. Jeff, you should totally call because if you could be involved with something that could really bring education to a lot of people who otherwise would not have access - this might be the most important thing you can do’,” he recalls.

When Jeff called the recruiter, he realised one of the investors, Scott Sandell from NEA (New Enterprise Associates), was one of the first investors in Financial Engines.

“When I did my first round, the Series B, when I wrote the business plan, Scott was one of the people that invested in Financial Engines. So, I had met him in January 1997. When the recruiter told him it was Jeff Maggioncalda, Scott said he had worked with me and known me for 18-20 years,” he says.

Jeff’s innate nature – not to give up, try and figure things out, and learn quickly – stood him in good stead alongside his experience of building businesses, raising money, and taking a company public.

India is a big market for Coursera, which already has more than 17 million registered learners.  It is set to overtake Europe in the next 12-18 months and become the country with the highest number of Coursera users in the world.

“We have grown from about 20 people to 250 people, from three cities to 26 cities. We are doing hybrid and remote work across India. It is not just sales and marketing; we are moving operations here and not through other firms. Most of our growth is in India and this is where we are betting on our human capital strategy,” Jeff says.

Advising entrepreneurs, Jeff explains it is important to start with a strategy. “Think who is the customer, what is the problem, how do you solve the problem(s)/meet their needs…always stay focused on how you are serving and delivering value?”

He adds that this is only one part of strategy.

The next piece is the market size. He suggests going after customer problems that are a large and growing market, not just in terms of number of people but in unit economics. He advises founders to think about revenue and the marginal cost of delivery for good unit economics and profitability.

“The third part, after you get the customer right and it's a big opportunity, is advantage. Serve customers in big markets in a way that you have an unfair advantage over competitors, because otherwise they'll copy you,’ Jeff says.