Empowerment and transformation: learnings and stories from 24 grassroots interventions in India 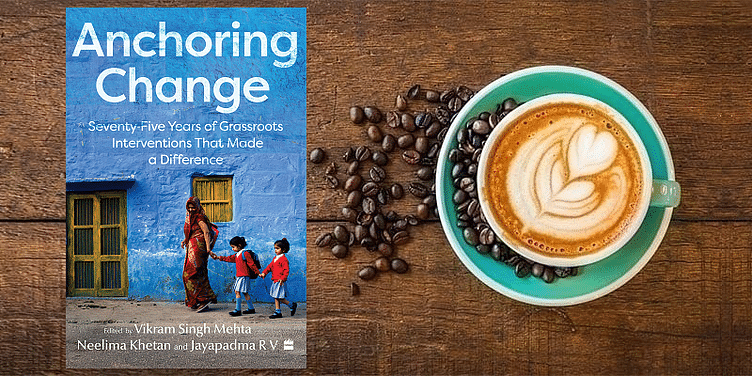 Social enterprises and non-profit organisations play a key role in a country’s socio-economic development. This book shares insights from 24 such organisations in India.

A comprehensive overview of social change initiatives and their contribution to development discourse is offered in the book, Anchoring Change: Seventy-Five Years of Grassroots Intervention That Made a Difference, edited by Vikram Singh Mehta, Neelima Khetan, and Jayapadma R V.

Over a period of 75 years since India’s Independence, the editors profile 24 civil society organisations across India that have done outstanding grassroots work. Key learnings and success principles are provided in each chapter by many of the founders.

Vikram Singh Mehta is Chairman and Distinguished Fellow of the Centre for Social and Economic Progress (CSEP). Neelima Khetan is a Visiting Fellow with CSEP. Jayapadma RV has been involved in sustainable social development for around three decades.

Here are my key takeaways from the 360-page book, summarised as well in the table below. See also my reviews of the related books Being an Impact Champion, Social Entrepreneurship in India, The Business of Change, Lean Impact, A World of Three Zeroes, Do Good, Grassroots Innovation, and Entrepreneurship in Developing and Emerging Economies.

The editors describe four waves of social change initiatives in India since Independence in 1947. First-hand accounts are provided by the founders and leaders of 24 civil society organisations (CSOs), with a blend of analysis, storytelling, and recommendations.

The chapters highlight the founders’ conviction and belief in empowering the marginalised, and ensuring their dignity through consultative and participatory approaches. Multi-stakeholder alliances and strategic partnerships can help ensure sustainability of civil society initiatives, particularly with government support to drive scale.

“Stability, continuity, and tenacity of leadership are key factors of success,” the editors add. “A fundamental dilemma is when to accept failure,” they caution.

Though failure plagues many initiatives, the conversations around them should not be swept under the carpet.

Funding should be accepted with care, and should empower the CSO without creating distortions or changing goalposts. There should be humility to search for learnings from the poorest, and offerings provided should not be sub-standard.

Social enterprise SELCO’s model of decentralised solar energy solutions showed that the poor can afford energy systems, which can be easy to service in a profitable manner. Basix combined credit, insurance, skill development, and livelihood promotion.

Goonj’s barter model bridged surplus materials of the urban affluent with the knowledge and labour of rural communities, going beyond traditional notions of charity and beneficiaries. Its material kits, people connections, and local skill development nudged people to focus on dignity and agency.

The National Smallholder Poultry Development Trust (NSPDT) became the largest cooperative smallholder enterprise in the sector. It built on the Amul model of dairy cooperatives.

Focused on insurgency-racked regions of Assam, the ant improved crafts-based livelihoods, education, and health. It hopes to become an ‘elephant’ by scaling its networks and brands. Its culture includes dignity of work and internal audits conducted by any team of employees.

Dastkar assisted crafts communities in production, design, and marketing. Its work influenced government policy and other crafts-based organisations, and spaces like Dilli Haat as learning spaces for crafts communities.

MYRADA worked initially with cooperatives, and then with decentralised smaller groups. It laid the seeds of the popular concept of self-help groups (SHGs). Support was provided by NABARD, with a focus on credit and not just finance.

The work by Kudumbashree (Kerala) in community-based local development for poverty alleviation is one of the drivers of the National Rural Livelihoods Mission (NRLM). It focuses on self-learning and social security.

Tamil Nadu’s Midday Meal Scheme was among the first to connect food, nutrition, education and development. At the national level, there is bipartisan support for such initiatives, and there are even cooking competitions to promote ethnic cuisines.

The Andhra Pradesh government established the Society for Elimination of Rural Poverty, with a focus on SHGs and community resource persons. The Bihar government implemented Jeevika to address poverty and underdevelopment. The Mitanin health programme (Chattisgarh) was adopted and scaled up by the state government.

Each chapter ends with a valuable section by the CSO leaders on lessons learnt in hindsight, which will be useful for all stakeholders in this space.

There are challenges in combing scale and diversity. More debate is needed in the face of polarisation in society. Communicative democracy should be promoted, rather than exclusion and majoritarianism.

CSO workers need to keep working on their ability to listen and accept different perspectives. The marginalised should be empowered to move away from a position of feeling that it is their fate to be excluded. The multiple dimensions of poverty need to be identified and tackled.

Intrinsic and extrinsic forms of motivation need to be balanced. A spirit of exploration and experimentation should be nurtured, and the outcomes should be well-researched and shared.

Institution-building is an art, science and craft. Donors should support honest introspection during times of setbacks and failures. Peer learning should be encouraged within and between CSOs, to avoid duplication and improve efficiency.

Local leaders should effectively motivate, mentor, and mobilise communities. Differences between leaders and community influencers need to be acknowledged.

Volunteers from around the world should be encouraged to participate in immersion programmes, provided they do not strain small organisations.

In terms of sectoral focus, healthcare should address curative, preventive, and promotive aspects. Agriculture is the largest source of employment in India, followed by the craft and handloom sector.

Impacts should be assessed at the level of end-users, community, society, and ecosystem. Globalisation and digital media are changing consumer and citizen attitudes. Local preservation and global opportunities should be balanced.

There is a pressing need for India to grow fast but equitably and sustainably. Sustainability should be in terms of finance, knowledge, culture, practices, values, institutions, community bonds, and environment. This should lead to harmony, health, hope, peace, and prosperity.