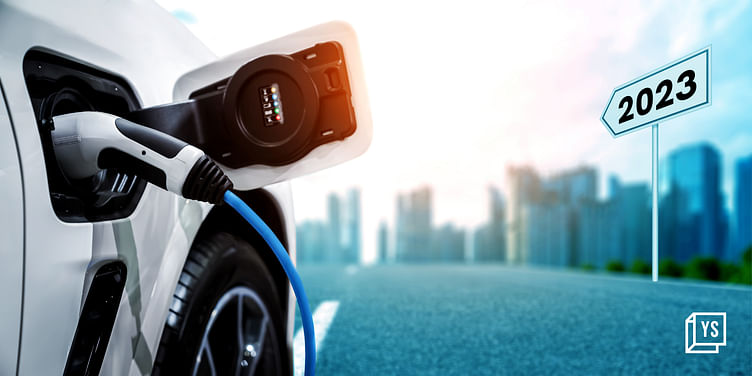 2023 will be a defining year for the Indian electric vehicle industry, with policy shifts and increased investment driving growth.

From a much-awaited regulatory policy on battery swapping and electric scooters bursting into flames, to Taiwan’s ﻿Gogoro﻿ and India’s ﻿Ather Energy﻿ betting big on the adoption of electric vehicles (EVs), 2022 has been a mixed bag of bumps and bruises, as well as strength and growth for India’s electric vehicle sector.

Industry insiders and outside experts are optimistic about the continued growth of the EV market in the coming year, despite the impending economic downturn expected to hit by March.

Policy shifts, cost-effective battery production, and infrastructure growth will be the main levers for growth in 2023. And there are already signs of tailwinds in the sector.

This year, the mobility sector raised $884.7 million in funding between January and November, across 62 deals, as per YourStory’s data.

The biggest deal was ﻿Ola Electric﻿’s $200 million raise from a clutch of investors, including Tekne Private Ventures, Alpine Opportunity Fund, and Edelweiss.

Ather Energy’s was the second biggest round at $128 million.

On the personal two-wheeler mobility front, homegrown startups consolidated their market share and took over from leading manufacturers. ﻿Okinawa﻿ and ﻿Hero Electric﻿, which had been ruling the roost for the last two years, were supplanted by Ola Electric. Commercial EVs continued to be dominated by legacy companies such as ﻿Mahindra Electric Mobility﻿, ﻿Piaggio Vehicles India﻿, Tata Electric, and ﻿Euler Motors﻿.

2022 was also the year for increased EV adoption.

Sales of two-wheelers and e-rickshaws doubled, while personal vehicles and e-buses rose 3X, compared with FY21, according to a report by Avendus, a financial services company.

In a price-sensitive country like India, the adoption of EVs is being driven not only by environmental concerns but also by affordability and sustainability. With oil prices rising, EVs offer a more cost-effective, long-term solution. Lower operating and maintenance costs compared to traditional petrol-powered vehicles also contribute to their growing popularity.

2023 will mark a significant turning point for the Indian EV industry in terms of policy, investment, and growth. Here’s what the year could have in store for the sector:

One of the key developments in the EV sector in 2023 is expected to be the implementation of new regulations, as well as more clarity on existing ones.

The Faster Adoption and Manufacturing of Electric Vehicles (FAME) programme (provides financial incentives to EV manufacturers and buyers) and the National Electric Mobility Mission Plan (aims to achieve 30% electric mobility by 2030) are two major regulations that have been shaping the industry the past couple of years.

The industry is also eagerly awaiting clarification from the government regarding the standardisation of swappable batteries, and is hopeful that regulators will, at the very least, be able to provide insight into their internal thought process on the matter.

States have also been formulating their own policies to boost EVs, not just in the private markets, but for public infrastructure as well.

The Union Budget 2023 could also include provisions for more incentives to promote domestic production of EVs and energy storage systems, and reduce the existing import fee on parts used to make lithium-ion batteries.

Safety regulations to clean up the industry

After the EV fires earlier this year, the government introduced a set of EV battery safety standards, phase 1 of which came into effect on December 1, 2022.

The AIS 156 standard is for batteries and two and three-wheeler EVs, while AIS 038 (Rev 2) looks at battery safety for a four-wheeler and above EVs.

The deadline for phase 2—more rigorous than the first phase as it involves R&D and design-level changes at the battery pack level—is March 31.

It is widely believed within the electric vehicle industry that the implementation of phase 2 will have a detrimental impact on manufacturers who have prioritised capitalising on the EV trend in the country over ensuring the safety of their battery technology.

EV players such as Ola Electric, Ather Energy, Sun Mobility, ﻿Honda﻿, ﻿BluSmart﻿, and Tata have outlined plans to set up charging and swapping stations. Incumbent players like Shell and IOCL have also committed to partnering with firms to provide space for EV infrastructure.

"2023 will be the year of EV infrastructure," says Chetan Maini of Sun Mobility.

Taiwanese battery-swapping giant Gogoro’s expansion into India has flagged off a race to gain more footprint in terms of infrastructure, and 2023 is expected to see more stations being set up, along with deals between energy incumbents and startups for more charging and swapping stations.

“EV infrastructure financing is going to see a sunrise in 2023 with FDI and domestic inflow,” says Abhijeet Sinha, Project Director at National Highways for EV, an organisation that aims to promote the electrification of India's transportation systems.

“The announcement of hybrid financing and battery-swapping policies will clear the clouds in the sector and pave the way for many global and national players to invest in EVs as a combination of energy and mobility infrastructure," he adds.

According to industry estimates, which take into account the number of energy stations that companies have pledged to establish, it is anticipated that approximately 4,000 swapping and charging stations will be built across India in 2023.

“Range anxiety is a concern for EVs, and the government and private players are looking to bridge that gap,” says Ankit Mittal, Co-founder and CEO of ﻿Sheru﻿, an e-mobility tech startup.

2022 was a tough year for the industry because of supply chain issues. EV manufacturers struggled to secure components and materials to produce their vehicles at scale, which limited the availability of EVs in the market and made it difficult for companies to transition to electric power.

The lack of lithium, rare earth magnets for motors and electronics, and proper R&D to make EVs safer not only expounded supply shortages, but also increased the overall cost of owning an EV.

The Indian government has been looking to localise some parts of the EV production line, including battery cells, battery management systems, and power electronics, to reduce dependence on exports and cut costs.

“The government has been encouraging foreign companies to set up bases in India and help in domestic manufacturing of EV components. It is likely that the constraints will ease in the near future,” says Vikas Aggarwal, Founder of Ipower Batteries.

But even if India has to continue importing parts of an EV, all the off-screen effort that went into establishing and solidifying supply chains in 2022 will likely pay off in 2023.

“As per industry experts, the issue has bottomed out and things are expected to gradually improve. However, companies will have to manage the demand in the short term,” said Avendus in its report. “They can also leverage this situation to de-risk their business by reducing dependence on specific/unique parts or single supplier situations that may cause a bottleneck in production.”

On the flip side though, the price of lithium carbonate, which has increased by 150% year on year, and other bulk materials such as steel, aluminium, and copper is likely to rise as investors trade metals in place of struggling equity markets.

Battery prices are expected to decline over the long term due to technological advancements. These improvements can offset the higher costs of raw materials and make EVs more affordable.

But for now, this could lead to an increase in costs for OEMs, which will inevitably be passed on to customers.

In India’s smaller towns and non-metro cities, two-wheelers rule the roads over four-wheelers, be it in the commercial segment or personal mobility.

Naturally, this is a large market for EV companies that are trying to get people to switch to electric by offering cost-effectiveness and independence from fluctuating petrol prices.

“2023 is the year we will have a significant adoption of EVs in Tier II and Tier III cities,” says Visakh Sasikumar, Founder and CEO of Fyn, an EV ecosystem platform.

In fact, Ather, during a tour of its newly launched facility in Hosur, said it is seeing more orders for scooters from Tier II and Tier III than it ever has before.

“The biggest constraint for EVs in rural areas is going to be the availability of charging infrastructure. But if we take a look right now, even in cities, at-home or personal chargers are used more than public chargers — so that constraint isn’t very strong for early adopters,” says Anurag Singh, Managing Director at Primus Partners.

“I think rural uptake of EVs will pick up in rural India, even if it lags that of cities," he adds.

The advancement of EV financing in rural regions has been significant in recent years, but efforts to provide access to loans for individuals outside of the traditional financial sector will continue to be a priority in 2023.

“In 2023, a significant part of EV sales will be allocated to Tier II and Tier III cities,” says Nehal Gupta, Director of AMU Leasing, an NBFC that focuses on financing EVs. “We’re seeing that reputed NBFCs have streamlined financing initiatives to make it easier for customers in Tier II and III cities to avail EV financing."