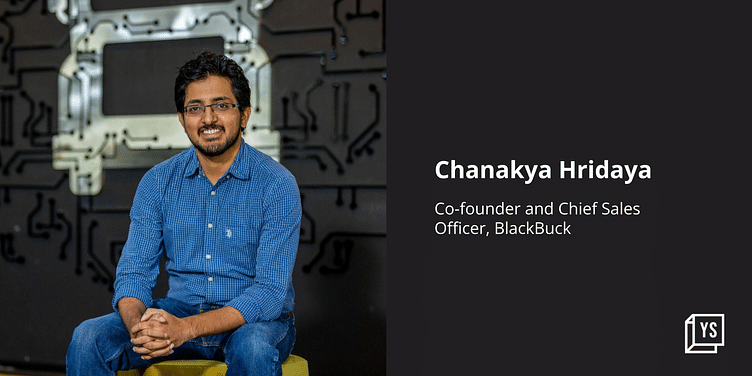 Over the last three years, the inter-city truck aggregation platform has built a suite of digital services to generate revenues and reduce its reliance on marketplace operations.

The Indian logistics space has seen big movement this year, with the National Logistics Policy promising to reduce the cost of logistics and churn in key private players in the market. It was also a year of reckoning for the sector as third-party logistics player Delhivery went public in May.

In the technology-enabled trucking space, Rivigo sold its business-to-business (B2B) express entity to Mahindra Logistics Limited for Rs 225 crore in a fire sale. Close competitor ﻿BlackBuck﻿, which joined the startup unicorn club last July, too shifted its focus from running a trucking marketplace to digital value-added services to diversify its revenue stream.

“The shift in strategy happened due to the rise in smartphone penetration, coupled with the government mandate on FASTag in 2019. That was an opportunity for BlackBuck to acquire truck owners for using the platform at a massive scale for toll payment,” Chanakya Hridaya, Co-founder and Chief Sales Officer of BlackBuck, tells YourStory.

“The third big change happened due to COVID-19 and the entire network went haywire. You could not move non-essential shipments all of April and May 2020. That is when our marketplace platform took off and we acquired a lot of truckers adopting the platform,” he adds.

According to Chanakya, nearly 80% of the company’s growth happened in the last three years.

Focus on digital solutions for growth

Founded in 2015 by Chanakya Hridaya, Rajesh Yabaji, and Ramasubramaniam B, BlackBuck started out as a platform connecting truckers with businesses that wanted to transport goods. This was the first version of its aggregation or marketplace business. At present, the platform claims to have one million transacting users on its end-to-end platform.

The current version of this marketplace includes features for payment at toll booths and fuelling stations, a telematics solution to track the movement of the vehicle and load-matching business.

“Payments is a very big vertical and it is a profitable venture for us as every toll that a truck passes through, or every fuelling a truck does, we get a certain share from our partner on the other side,” says Chanakya. He adds that in the telematics business, BlackBuck charges a one-time fee for the hardware installation, and then a recurring payment for using the software.

Of the 35 lakh truckers in the country today, nearly 12 lakh use a mix of services on the BlackBuck platform, he says, adding that about one in five truckers uses the company’s telematics and one in three uses the tolling solution.

The loads business is split into two parts—one where BlackBuck charges a direct take-rate on every transaction, targeted at enterprise customers, and the second one being a subscription business for Small and Medium Enterprises (SMEs). Chanakya says nearly 10% of the country’s loads business is posted on the platform.

“You can also manage your entire transportation spend on the platform, as well for a certain fee and use tracking as a value-added service. So, digitising the entire ecosystem is how we look at it today and we have multiple businesses that each play a part in the overall revenue,” he adds.

The move to focus on digitisation has helped BlackBuck diversify its revenues, just a bit. For FY 2021, nearly 93% of its revenues came from its marketplace operations, 6% less than the nearly 99% in the year-ago period.

Its revenue from operations stood at Rs 853.3 crore in FY21, a heavy decline from the Rs 2,229 crore in the previous fiscal due to COVID-19. However, the company managed to narrow its losses to Rs 233 crore, nearly half of the Rs 445 crore recorded in FY20.

It is yet to file its earnings for FY 2022 but Chanakya predicts, this fiscal will have both tolling and telematics businesses with “over 60% contribution margin. In terms of load-board, the business is in a very early stage of monetisation,” he adds.

Challenges of being a pure play aggregator

Currently, the majority of BlackBuck’s customers on the shipper side are SMEs, with up to 80% of orders coming from them.

But it isn’t easy to continue being a pure-play aggregator when it comes to matching trucks with suitable orders and vice-versa. Challenges include finding the best optimisation between a trucker and shipper to bring down the idle time for the truck and bring in efficiency.

“The problem faced by product and engineering is that trucking has multiplied variables to it. For example, there are different types of trucks that can carry different tonnage. There is also complexity on the home-base of the trucker which needs to be matched. Also, to minimise the dry run for truckers, we have to match the right type of goods which will not perish within the time taken for transportation,” adds Chanakya.

“Trucking aggregation is a low-margin business and the success depends on sectors and corridors the business can service. This includes multiple steps or challenges, including the acquisition of vendors, pick up volumes, availability of vehicles and others,” said Manish Saigal, Managing Director at Alvarez & Marsal.

He adds that while trucking for ecommerce companies faces the challenge of negotiation of rates despite growing volumes, trucking businesses which work as third-party service providers to corporates are often stretched for time and efficiency. “Unloading at the warehouse can take an entire day and the trucker loses a day’s business. This impacts the payouts.”

Another challenge is payments with larger corporates settling dues once in 30-45 days, while truckers need to be paid upfront for their services, impacting the availability of working capital for a truck aggregation play.

BlackBuck remains the only player in the inter-city marketplace for trucks. Its bet on payments and telematics as well as its push into financing small and medium truck owners is likely to continue generating recurring revenues.

“So, when you look at inter-city marketplaces today, I think, there is no organised player. There are a lot of players who have tried to come into the inter-city segment in the last five to seven years but it is complex and takes patience, time, and a lot of knowledge of how this industry operates,” says Chanakya.

A recent report by government think tank NITI Aayog and non-profit RMI said that India’s trucking market is expected to grow over 4X by 2050, with the number of trucks growing from 4 million in 2022 to 17 million in 2050. It added that road transport via trucks carries the bulk of India’s goods, servicing 70% of domestic freight demand. The bulk of the demand is for heavy and medium-duty trucks.

With the rise in demand for goods, rising urbanisation, growth of e-commerce and rising income levels, road freight movement is expected to increase to 9.6 trillion tonne-kilometres by 2050.

According to Chanakya of BlackBuck, the trucking sector in India is a $100 billion to $150 billion industry, with a significant chunk of inter-city long-haul.

“Inter-city as a problem has not been cracked yet. Inter-city has always been more complex and the larger play,” he adds.  BlackBuck is the only startup in the sector, aggregating demand from multiple industries for small and medium truck owners.

Backed by the likes of Tiger Global, Blackbuck is also well funded, having raised $67 million in Series E last July, led by Tribe Capital, IFC Emerging Asia Fund and VEF. The company was valued at $1.02 billion at the time.

“Our spends have always been under control. Plus, we just raised a large round last year, so we are today very well capitalised. Our burns are pretty much in control. The entire thought is about scaling up, building revenues. All of our business lines today contribute revenue and the focus is on building on the back of the capital we already have,” signs off Chanakya.