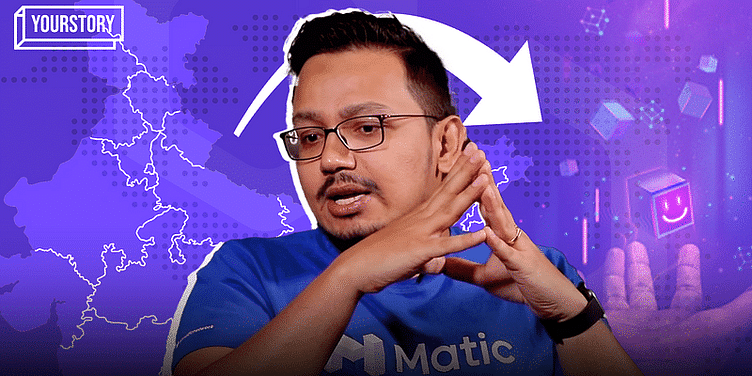 Launched in 2017, Polygon enables blockchain networks to connect and scale, and aims to create a multi-chain ecosystem. It has partnered with top brands like Coca-Cola and Starbucks and aims to become one of the top three Web3 platforms in the world.

The hustle has been Sandeep Nailwal’s best friend, taking him from Delhi's “Jamna-paar” settlement to heading multibillion-dollar Web3 firm ﻿Polygon.

He may have started small, but Sandeep always dreamt big. Since childhood, he says he knew he “was going to do something big”. But he didn’t know what it would be, especially after he couldn’t realise his IIT dream.

He eventually went on to lead the technology department at Welspun, the largest textile company in Asia, and later worked as a consultant at Deloitte.

In 2015, his background in technology set the stage for the launch of ScopeWeaver, his first company and India’s largest marketplace for professional services. And just two years later, Sandeep and his co-founders, Jaynti Kanani and Anurag Arjun united under their shared vision and their passion for blockchain technology, and launched Polygon.

A recent emergence in blockchain technology has seen the rise of ﻿Polygon﻿. Today, Polygon is an easy-to-use platform on the Ethereum network that allows for scalability through layer-2 solutions. More recently, a multi-chain system that supports the interconnections of multiple blockchains and networks. However, before the Polygon network broke into the top 15 cryptocurrencies and was dubbed the “internet of blockchains”, it was known as ‘MATIC’.

The Indian blockchain platform enables blockchain networks to connect and scale, and aims to create a multi-chain ecosystem compatible with Ethereum. Dubbed the “internet of blockchains”, it uses a proof-of-stake consensus mechanism to process transactions on-chain while deriving its security from Ethereum.

The global and sustainable Web3 infrastructure that it is today suffered a fair amount of rejection in its initial days. In fact, around the time the team started, the frenzy of initial coin offerings (ICO) was sweeping the globe. The world was opening up to the revolutionary potential of distributed technology, with fortunes being made and lost instantly.

“We could have easily raised $15-20 million from outside, which was the norm in the industry at that point. But we decided that we would raise money only after we have a product,” Sandeep says.

The company took this decision when the world was predicting a bear market on the horizon. But for Sandeep, the conviction came early alongside his core principle to prioritise long-term ideologies for Polygon.

“Let's say I'm doing something and making $2 million in revenue, and if you tell me that if I immediately do something, it will make me $100 million, but there is a limit – I will not cross $100 million for all time, I will not choose it,” he says.

Delivering the commencement speech at Stanford University in 2005, Steve Jobs had famously said: “You can't connect the dots looking forward; you can only connect them looking backward.”

And in ways large and small, Sandeep believes his decisions in the initial days of building Polygon have converged at various points over time to build the company that it is today. “There is a constant chip on the shoulder that we have to make it there,” he says.

“Even though we have 40,000 applications built on Polygon, we know that this whole space is just getting started,” he says. “We have 10 co-founders now. We have acquired companies, onboarded founders, and given them co-founder status of their own product category.”

As Sandeep puts it, “Indians staunchly believe in Vasudhaiva Kutumbakam (the world is one family). That is also the spirit of Web3. We are not building a company which is a part of a geography that three or four people control. We are building a protocol for everyone - an open, permissionless protocol.”

There's an ongoing debate about whether Web3 is a solution seeking a problem or if it is trying to solve one. Sandeep believes it's neither. "Web3 is changing how the problem is solved." He says, “When you get into it, you realise this is not a technology. This is how humanity will evolve. When these better solutions and experiences evolve, all apps will slowly start migrating into them. Maybe it will not be a new category, and the existing ones will move into this.” Today's blockchain landscape has a lot in common with the early internet: it is unwieldy, unsafe, and unregulated, and with loosely connected protocols.

The internet's early critics were clearly wrong, and with blockchain, however, the jury is still out.

With an estimated 15 million active crypto users, India has been in regulatory limbo since the Supreme Court in 2020 overturned a central bank ban on digital tokens. The government has yet to take a final call on whether to ban virtual coins or regulate them.

On the face of it, India has the potential to be a crypto powerhouse. Its 1.4 billion population is young and has a growing middle class that is embracing crypto. Combined with a less-developed traditional financial system, that has led to the world’s fourth-highest crypto adoption rate globally, according to blockchain research firm Chainalysis. Overall crypto transactions in the country climbed to $172 billion between July 2021 and June 2022, Chainalysis said.

India has over 11% of the global Web3 talent, making it the third-largest Web3 talent pool, and the surging demand for blockchain developers and specialists bodes well. Web3 is built for individuals, and as Sandeep says, "It is fundamentally borderless. So it is a great equaliser.”

Sandeep believes that this is empowering individuals, businesses, and communities in a way the current system cannot. “I know a community manager with a salary of  $100,000, or about Rs 80 lakh, per year, two years after college," he says.

Clearly, Web3 is changing the conventional route to help people get coveted jobs and salaries today.

Unlike ecommerce companies that bring an influx of money to India, companies under the decentralised vertical can raise funding from outside and deploy the product in the country.

With increasing confidence and interest from global investors, investments in Indian Web3 startups have also soared. The Indian Web3 ecosystem has raised $1.3 billion in funding through April 2022. Over 60% of Indian Web3 startups have expanded their footprint outside India, with headquarters across the globe. However, their most extensive talent base remains in India, putting the country on the global map for Web3 solutions.

“There's an immense potential for some Indian-led Web3 companies to become global brands in the next five to seven years,” Sandeep believes.

Sandeep highlights the use cases of blockchain adoption in the form of public procurement and land title registries, amongst others. “There is widespread, systematic corruption in India, but blockchain makes one publicly accountable.”

India isn’t too far away from realising this dream. The Indian police unit in Firozabad  recently launched an online complaint portal powered by Polygon. The pilot portal, policecomplaintonblockchain.in, leverages blockchain technology’s immutability, which means complaints cannot be tampered with or deleted by either the police department or the complainant. This could be a game-changer in ensuring rights to justice.

More blockchain use cases will continue to emerge. But while blockchain can complement and enhance existing legal frameworks and social structures, its efficacy is only as significant as the system of which it is a part.

On being asked how he balances his mind and body and be the best in his field, Sandeep was all accepting of his own vices and his long and arduous journey in overcoming them.

“I have been very vocal about my depression and stress issues, and was on medication till three months back,” he says, blowing the lid off the startup culture that is synonymous with hustle and burnout. For him, these pressures were amplified during 3-4 years of his constant grind with Polygon. He now eases stress by meditating and playing games in his free time.

Having battled his own demons, he advises others not to let ego guide decisions. “Ego does help you reach your goal, but beyond a point, it becomes detrimental.” Today, 11 years after he started his career, Sandeep is still relentless about his output but has learnt to quash his ego.

How has the web evolved, and - more importantly – where is it going? Also, why does any of it matter? If history has taught us anything, it is that changes matter a lot. And Sandeep is determined to lead the change with Polygon.

Earlier this year, the company raised $450 million in its latest financing round led by Sequoia Capital, with a market cap of about $13 billion, to aggressively expand its portfolio of Ethereum scaling solutions and work to attract traditional brands and the larger blockchain developer ecosystem.

In the last few months, household brand names like Coca-Cola, Starbucks, and Reddit, among others, have partnered with Polygon to get their foot into Web3.

Growth required Sandeep to adopt a new mindset. “I play for the team's victory, not for the victory of Sandeep.”

It’s a reminder, he says, to “accept that everybody is smarter than you. Only then can you try to solve the problem at hand”.

Sandeep and his team are eager to continue building the Polygon ecosystem with the ultimate goal of “bringing crypto to the masses”. “Our goal now is to become one of the top three platforms in the world,” Sandeep says.

(The story was updated to correct a typo)