From talent to technology: the eight principles of creating a culture of innovation 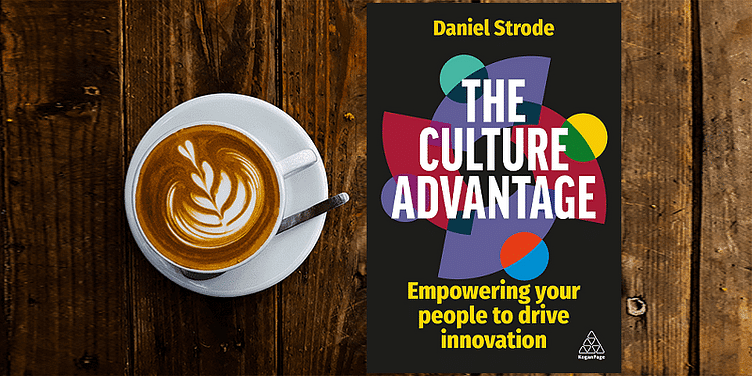 This compelling book by an innovation expert offers a range of steps, structures, and stories for creating the right culture of innovation.

From talent to technology, companies can gear up for the business uncertainties and stiff competition ahead by nurturing a culture of innovation. These steps are effectively described in the new book The Culture Advantage: Empowering your People to Drive Innovation by Daniel Strode.

Daniel Strode is the Global Director of Culture and Strategy at Banco Santander, based in Madrid. He is the custodian of a common organisational culture—the Santander Way. He is an Adjunct Professor at the IE School of Human Science and Technology, and a frequent speaker at industry conferences.

The frameworks in the book are backed with several interviews, questions for reflection, and examples of innovation beyond the usual suspects. It would have been great to have specific insights from Daniel’s own company as well.

Here is my key takeaway from this compelling 190-page book, summarised in the table below. See also my reviews of the related books The Culture Code, Gorillas can Dance, Lateral Thinking Skills, Rebel Talent, Creative Confidence, Customer-Driven Transformation, Multiplier, and The Moonshot Effect.

“Culture is the advantage, it is the driver of innovation,” Daniel begins. Global economic uncertainty, the convergence of Industry 4.0 technologies, and the rise of nimble startups is requiring companies to become even more innovative.

Strategy, structure, and organisational culture are key ingredients of innovation. New initiatives can be via separate entities, a portfolio approach, or co-creation via accelerators.

Culture can be created, grown, and reinforced, preferably in an organic way. Culture is more than freebies and props, and should be reinforced with a sense of mission, processes, and incentives, the author affirms.

Unfortunately, many companies have deviated from their paths, as seen in corporate scandals like Enron (accounting, fraud), Volkswagen (‘defeat devices’ in the exhaust), and Boeing (737Max crashes). Measures like having whistleblowers and compliance officers can correct such missteps.

Daniel draws on the cultural web model developed by Gerry Johnson. Its components are structure, power, metrics, incentives, routines, rituals, symbols, language, and stories. All of these are embedded in a paradigm and a set of assumptions.

Eight chapters cover the innovation culture principles described by Daniel. The material is also well-referenced, with 14 pages of sources.

Companies need not stick to their lane. They can revisit their beliefs and assumptions and enter new domains. Examples include Amazon, Apple, Netflix, and LEGO.

Gary Vaynerchuk expanded from his father’s liquor shop to Wine Library TV, an ad agency, a talent agency, an NFT platform, and a broader holding company for his many ventures. Such innovators ask Why Not rather than Why and weigh risks as they enter new sectors.

In contrast, though Nokia got off to an innovative start in the mobile phone business, it became complacent and regarded Blackberry rather than Apple as its competitor. Blockbuster felt it could continue with its ‘Midas Touch’ in the era of video rental stores and missed new business models like DVD mail-order delivery and streaming.

Netflix, on the other hand, was willing to cannibalise its DVD business and move into streaming and creating original content. Netflix continues to nurture a culture of ideas and suggestions, such as adding a new feature to download content for later online viewing.

LEGO had a good run from wooden toys to plastic bricks and theme parks. It lost its way for a while and drifted away from the enthusiasts and collectors, but turned around with a renewed commitment to help children learn creative problem-solving.

The crowdsourcing platform LEGO IDEAS was launched in 2008. It also expanded into the education and business markets. The company’s values include creativity, imagination, fun, caring, and quality.

Daniel advises companies to set aside time for testing alternative hypotheses, look for future-oriented leading indicators, listen to customers, give all employees a voice, and embed the spirit of innovation in the culture.

Time, budget, and resource constraints, including self-imposed restrictions, can spur innovation. Daniel shows how innovative companies work with startups through the accelerator model, with self-imposed constraints of duration (a few months or even days).

The Oakland Athletics baseball team did not have enough budget to hire star talent but built a competitive edge through the effective use of data analytics (depicted in the movie Moneyball).

To have a growth mindset of embracing challenges, learning, and ideating, companies should have a culture of psychological safety for employees to discuss their suggestions and prototypes, even if they make mistakes along the way.

Open and courageous conversations should be encouraged, along with channels for whistleblowers. Guidelines for giving constructive feedback should also be spelt out, with multidirectional and multichannel flows.

Daniel uses the STARS outline in this regard: Situation, Task, Action, Result, Support. Suggestions should be actionable so employees know their ideas are taken seriously.

“Learn from failures, and make them visible,” Daniel advises. Mistakes should not be seen as a cause for disappointment but as an occasion to learn and share knowledge. Patterns and root causes should be identified.

“Mistakes are necessary. Mistakes are a completely natural process of evolution,” Daniel affirms.

Examples include Ben & Jerry’s ‘Flavour Graveyard’ of ice cream flavours that failed, and SpaceX learning from the explosions of its Starship rockets. In contrast, Boeing’s 737 MAX crashes revealed a culture of fear, pressure, dismissal of concerns, and lack of psychological safety.

Gympass has a culture of ownership, the celebration of failure and lessons, rewards for doing the right thing, and listening to the ecosystem. “When you listen, you are never short of ideas,” observes co-founder and CEO Cesar Carvalho.

Constant collaboration with a diverse community helps with new ideas, learning opportunities, and the strengthening of linkages and friendships. The internet has helped engage with crowds at speed and scale.

Effective participation and voting have helped design anti-fog face masks during the pandemic (by XPRIZE). Many companies benefit from the “collective brilliance” of crowdsourcing platforms like Herox and Clever Together.

Such challenges should be meaningful, inspiring, and time-bound, with clear follow-through and action (debate-decide-deliver). Physical formats for such crowd inputs include Pixar’s Braintrust meetings, cross-pollinated into Disney’s Crit sessions.

The LG Innovation Council, launched in 2020 with 12 future tech experts as members, aims to promote collaboration and discovery. DARPA and Johnson & Johnson’s JLABS are other successful examples of crowd engagement.

The internet opens up the cognitive surplus of vast diverse crowds, Daniel affirms.

Technology adoption has evolved in fits and spurts as seen in ATMs’ early scepticism and subsequent widespread diffusion. The journey of Web 1.0, Web 2.0 and Web 3.0 reflects the evolution of content, user-generated content, and user-generated authority, Daniel explains.

Fitness apparel firm Gymshark has a culture of being “fearlessly progressive and consistently future-conscious.” It was early in leveraging TikTok and has roped in tech experts on its board of directors.

However, ego, fear, and sunken cost fallacy have come in the way of many companies. Xerox failed to capitalise on its development of the PC and stuck to its business of photocopiers. Kodak invented the digital camera in 1975, but chose to stick to its film business. British and French governments continued to fund the Concorde though it was commercially non-viable.

For example, Renault partnered with LG for dashboard infotainment. Google lets employees experiment on related projects for 20% of their time, a practice which led to the birth of Gmail.

“Talent is the foundation any great company is built upon,” Daniel affirms. To thrive on innovation, companies should hire employees with curiosity, optimism, and a propensity to learn.

They should be self-starters and have common values but also reflect diversity in skills, abilities, and experiences. “Hire for cultural contribution, not fit,” Daniel advises.

“Great talent is not always the right talent,” he cautions. There should be cultural alignment, and professional excellence should not come at the cost of aggressive behaviours.

Hiring inputs can even come from the office receptionist or driver. Probing questions should address attitudes towards failure and willingness to collaborate. A company’s culture should also be showcased externally and lived in practice.

Examples include the Netflix Culture Deck, Satya Nadella’s reorienting of Microsoft’s culture, Asana’s two-year planning of its culture, and the pandemic relief contributions of Unilever and LVMH.

Innovative talent should be nurtured in the best possible environment so that employees serve customers well. Media platforms like Glassdoor and Indeed allow fearless employees to directly comment on and even critique their employers.

“You can’t compete with people who love what they are doing,” Daniel observes. Inspiration, a sense of purpose, recognition, and a sense of being listened to help here. “What gets recognised gets repeated,” he adds.

For example, Southwest Airlines values employees for demonstrating their “warrior spirit” and “servant’s heart,” and delivering legendary customer service. Cloud solutions provider Pax8 puts its people first and even “fires” customers who are not good.

A high-trust environment empowers people to take decisions on their own, and not be fearful of making mistakes. Surveys, risk reporting, and even exit interviews are good sources of feedback.

“People are the only appreciating asset that your company has,” Daniel affirms, in contrast to machinery and equipment.

“Culture is a leader’s job,” Daniel writes. They are responsible for setting, evolving and living the culture. “Culture cannot be outsourced to someone else,” he adds.

“In this day and age, more of us are leaders than ever before,” he observes, as new waves of leadership opportunity arise. Leaders should encourage knowledge-sharing and reverse mentoring.

“Set high, hard goals,” Daniel advises, particularly for innovation. It makes people inspired and perseverant. Leaders should empower employees and get out of the way. They should show employee empathy in terms of cognition, emotion, and needs.

Examples of those who lead by example are Jeff Bezos, who reinforced the value of frugality at Amazon by making his table out of a door. Leaders who showed the spirit of caring during the pandemic include Jurgen Klopp (Liverpool Football Club) and Arne Sorenson (Marriott). Walt Disney, JK Rowling, and Colonel Sanders typify positivity and certainty in the face of funding challenges.

The company’s cultural values include doing the right thing, succeeding as a tribe, and taking ownership. It frames mistakes as “learning moments” that can be shared with all. Leaders practice coaching rather than micro-management.

The book ends with a profile of innovation at Ping An, a Shenzhen company that expanded from insurance to healthcare.

It partnered with rivals, has business lines structured like startups, invests in growth-stage tech startups, and has a third of its employees in tech roles. Its leaders showcase the frugal founder mentality by travelling in economy class.

“The investment you make in your culture will pay you back many times over,” Daniel signs off.

In sum, this is a valuable and practical book for aspiring innovation leaders and business heads, as well as founders of scale-stage startups. The examples and questions for reflection help in imbibing the learnings as well.